Books away from the mainstream 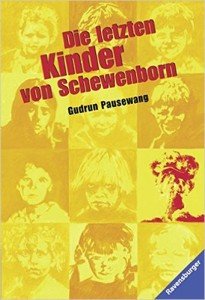 “When we drove through Lanthen, everything was still as usual. But in the forest, especially in the curve at Kaldener Feld, the lightning suddenly flashed so brightly that we had to close our eyes. My mother screamed and my father hit the brakes so hard that the tires squeaked. As soon as the car stopped, we saw a blinding light in the sky, behind the tree tops, white and terrible, like the light of a huge welding torch or a flash that does not go away. I only looked inside for a moment. Still, I was blind for a while afterwards. "

The 12 year old Roland lives with his parents, his four year old sister Kerstin and his 15 year old sister Judith near Frankfurt. As every summer, the family wants to spend a few carefree weeks of vacation with their grandparents in the small town of “Schewenborn” near Fulda. The situation in Germany is tense and the word "atomic bomb" is being used more and more often, but the family does not want to be frightened and embarks on the journey …!

But they don’t even get to Schewenborn because the unbelievable becomes bitter reality, an atomic bomb explodes! Blast waves and storms move across the country, fires break out, trees fall over and the family has to leave the car behind and walk the last few kilometers to Schewenborn. Once there, Schewenborn is badly devastated, no house has more windows, debris sometimes clogs the streets, there are occasional fires, but the village is not completely erased and the grandparents’ house is still relatively intact.

However, the grandparents are not there, they wanted to quickly go to Fulda to buy a gift for the grandchildren …! The totally horrified family waits for the grandparents for days but they never come back …! In the next few days, many people from the surrounding area come to Schewenborn, almost all with terrible injuries, burns and the first signs of radiation sickness. Roland and his family learn that Fulda has been completely wiped out and learn in the next few days that atomic bombs have been dropped in many larger cities across Germany …!

Germany and the life they knew no longer exist, it there are none Government more and there is no need to hope for help …!

Looting begins within a very short time, more and more strangers and injured people come to Schewenborn, food and medication run out quickly and the struggle for bare survival begins …!

Then diseases break out, there is a first wave of death and thoughts of the not far away winter also move in …!

I have already read a lot of dystopias / end-time stories, but this book is really hardcore and has been very hard on my kidneys, which is mainly due to the fact that the story is told from the first-person perspective of 12-year-old Roland …! Since the book is titled "The Last Children of Schewenborn", it is clear that a large part of the plot revolves around the children, who now have to pay for the mistakes of adults …!

Some parts really got on my nerves and I had tears in my eyes a few times because the story is so cruel that moved me so much! It is fascinating that the booklet is only 189 pages long, but the author reports with such accuracy that I can hardly believe that such a detailed and moving story in which so much can happen can be created on so few pages …!

It’s not "just" about survival, it’s also about how to preserve a bit of humanity in such bad times with so little hope …! To survive you have to just be selfish but there are limits, the Roland family and above all Roland try to adhere and above all Roland is committed to the countless radiation victims and seriously injured who are accommodated in the completely overcrowded hospital and who cannot be helped …!

This book is extremely disturbing and makes you think a lot!

The book is from 1984 but it is an absolutely timeless story and the story itself takes place in the mid 80s.

I have seen the film adaptation of Gudrun Pausewang’s dystopia "The Cloud" several times and I will definitely read more of her books.

A great book, it just blew me away! I can absolutely recommend it but you should already be on dystopia and not be tender because the story goes to the kidneys …!

Gudrun Pausewang was born in East Bohemia in 1928. She experiences displacement and flight, comes to Germany in 1945 and ends school in Wiesbaden. She became a teacher and taught for many years in South America, where she also wrote her first books. Your political stance – “End with the War! No more environmental destruction! ”- she doesn’t just focus on fiction: in 1998 she did her doctorate on the subject of“ youth literature and National Socialism ”. Further scientific titles as well as numerous books for children and young people follow. She lives in Schlitz near Fulda, a small town next to the non-fictional town of Schewenborn.