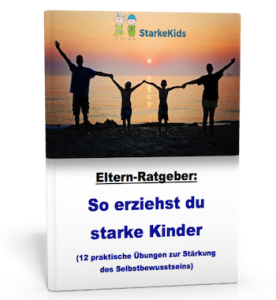 This is how you raise strong children

It was a wonderful, mild summer day. The little field mouse and her friends played all day on the field by the pond. They played catch, hide and seek and ran.

"I have an idea!" When the field mouse started like this, the friends were always very excited. "We play circus!" "Circus?" Wondered the little pink pig. "Yes! Circus. I am the trainer and you are the wild animals. "" What should I be little frog? "" You are a seal. "" What? "The frog could not believe it. A seal! Such a curd. "And me?" Asked the hedgehog. "You are …" The field mouse thought for a moment. "You’re a horse." "I’m not a horse," the hedgehog objected. "A horse doesn’t have spikes." "We’re just playing. And you, piggy, are a lion. "" Yeah! I am the lion. Huarrrrg! ”Roared the pig.

Shortly afterwards the three “animals” sat around the field mouse and “threatened” it. The field mouse swung an elongated leaf like a whip. "Wild animals! Obey! Do what I say! ”And the leaf whizzed over their heads. "Roaaarrrr!" Roared the pig. "Hui hihihihi hi. Brrrr." Made the horse and threw his head back and forth. "Urk Urk Urk." The seal rejoiced until it saw the lion approaching.

The frog hopped away. "Leave me alone, piggy. You’re not a lion. ”But the pig ran after the seal. "Grrrrr. I’m hungry! ”“ Stop lion! ”Cried the trainer. "Obey me! Sit down and leave the seal alone. ”The lion sat down, but continued to grumble to himself.

Meanwhile the horse wanted to run away. The hedgehog galloped to the edge of the field. Well, actually the hedgehog pawed very leisurely, just like a hedgehog paws. But in the game the horse quickly lopped across the field like the wind. "Horse! Stand still. Brrrrrr! “Made the field mouse. Um … the trainer. And at least the horse slowed down.

The seal was now sitting right next to the animal trainer and was constantly opening its mouth. "Urk Urk!" She said. And the field mouse asked: "What is little seal? Are you hungry? ”“ URK URK! ”The seal called happily and waited on one Fish. The field mouse held out a cob of corn that had been on the edge of the field. "Uh!" Made the seal and shook his head. "Go eat!" Cried the trainer. "So you can jump through that burning tire when I say it!"

"What should I do?" Excited the frog. "I’m not jumping through a burning tire!" Manno! Imagination is required here. "" Imagination. Quark everything. I don’t want to be a seal. "" Okay, then you’re just a … exactly! A zebra. ”“ Better already, ”said the frog. And looked happily at his imaginary stripes. Then he started to hop, uh … gallop like the hedgehog. The hedgehog joined them and whispered something into the zebra’s ear.

Then the two sides galloped on page towards the field edge towards Koppel. "Stop! Stop. ”Exclaimed the trainer. But the horse and the zebra seemed to get along splendidly and had no intention of obeying. They continued to trot towards the paddock. "Hey you two! What did i tell you Stop and gallop back. Now! "." Pah! We don’t even think about it. Catch us again. Your lion can help. "

I agree! That’s how the trainer wanted to do it. "Lion! Be grim and catch the two galloping animals with me again! ”GRROARRR was the answer and the lion sprinted to the paddock, where the two darling riders had already arrived. "Grrrrr! Huaaarr! ”Made the lion and fell on the zebra from behind. "Ouch!" Cried the frog and punched the lion in the buttocks. "You can’t bite me! You cuddly toy. "" But I’m a lion. And lions eat zebras, "" But not out of game! You three cheese high. ”Then the lion chose the horse. "Ne ne ne ne ne!" The hedgehog shouted when he saw the lion approaching. "If you even prick me with my mustache, I’ll tie a knot in your lion’s curly tail."

The piggy stopped insulted and began to sulk. A small tear ran down his left cheek. "Oh piggy! I didn’t mean it that way. "The piggy started to smile a little. "Okay, you can bite me. But not doll! ”And the lion took the sweater from the hedgehog into the mustache and grinned up to both ears. The hedgehog rolled his eyes. "But now is good. Give the sweater back! ”And the hedgehog picked up his sweater again.

"You are the craziest group of wild animals ever tamed!" Said the little field mouse proudly. "And now you’re one crocodile and I am the trainer, ”said the frog to the little field mouse. He took the "whip" and swung it over his head. "Wild animals! Listen to my command: make males! ”The wild animals tried to make males. And then they writhed with laughter. It was the funniest circus act that had ever taken place in the paddock.