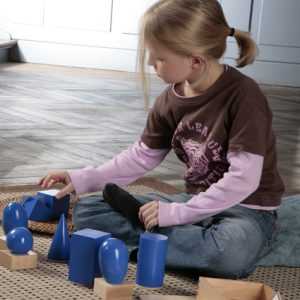 The Montessori Pedagogy – “Help me do it myself!”

Like robots, children are urged to integrate into an existing system and stubbornly learn according to the curriculum guidelines. Without regard to losses. The creativity as well as the individuality of each child is completely lost. While success is still measured by censorship, thinkers and critics have long doubted the stale teaching methods.

It’s almost unbelievable, but more than 100 years ago there was an Italian named Maria Montessori, who developed alternative and incredibly effective learning methods, so that even mentally handicapped children could do incredible things. She showed at that time that learning can also be quite different.

Children who were written off from society and usually also from their own parents, learned with the help of Montessori materials in their own ways to understand the world and to discover their strengths.

Who was this Maria Montessori??

On August 31, 1870 saw the daughter of Alessandro Montessori and Renide Stoppani in Chiravalle near Ancona the light of day. Maria grew up sheltered in the circle of a very wealthy family.
Since Maria Montessori was initially denied medical studies, she studied engineering and mathematics. After passing this course, she was admitted to medical school and in 1896 became the first woman to receive a doctorate in medicine in Italy.

As an assistant physician in the Department of Child Psychiatry, she eventually began working in Rome with mentally handicapped children. She began to develop her own teaching and learning methods, while she watched the children attentively and gave them little suggestions.

In 1907, Maria Montessori was entrusted with a children‘s home in a suburb of Rome. There she applied her once developed learning methods and the unimaginable progress of the mostly mentally handicapped children made headlines worldwide. The methods were way ahead of their time and yet they found worldwide approval. Their unconventional methods stood in stark contrast to traditional learning methods and yet the successes spoke for themselves.
During her life Maria Montessori published books with the learning methods. To this day, these are regarded as the cornerstones of pedagogy and are still used in our own Montessori schools and institutions and worldwide.

Learn with curiosity and joy

Do children really need outside pressure to learn successfully??
It is imperative to constantly evaluate and control to judge the performance?
Anyone who takes a critical look at these questions realizes that pressure alone can do one thing:
stress

Loss of self-esteem and creativity

Learning can be so much fun. Provided it is done of its own accord.
Maria Montessori was convinced that every child must have an individual learning rhythm and know their own strengths and weaknesses in order to learn effectively. Instead of pressure from above, educators should be able to stand by and offer help for self-help.

Hence her motto: “Help me to do it myself!” – Maria Montessori

Children who do something of their own free will immerse themselves incredibly in this matter and can not be distracted by anything. In these moments, they follow the natural desire for knowledge, which is demonstrably present in all human beings. Learning is inevitable. It is simply about the implementation of how children are promoted without overstraining them.

How do children learn according to the Maria Montessori method? There are institutions, elementary schools and nursery schools all over the world that build on the foundations of the learning methods developed by Maria Montessori and are proven to be very successful.

In contrast to conventional schools, the children of the Montessori schools are offered rooms which are full of work materials and learning accessories. The child decides what it is about. He is free to choose whether he wants to deal with mathematics German or rather creative.

Due to the fact that in this method, the child finds out himself going far and out of pure curiosity and spirit of inquiry acquires knowledge, the learned remains in the memory. True to the motto: Learning by doing! Those who learn something through their own interaction will remember it much better than someone who literally prays it.

Specially trained educators are of course at the side of the children. They will not be left to their own devices, and the fact that the children decide does not mean they can do what they want. It is basically about children that decide individually what they want to learn when. It gradually develops certain topics, whereby the child actively decides what it wants to do. Which order it chooses, whether it wants to work in the group or on its own, is at the discretion of the child.

In contrast to traditional schools, children can choose from a variety of materials.
In general, these children gain the same level of knowledge as their peers in conventional schools. Because a transition to a traditional school must always be guaranteed, since not all local Montessori schools are available.

Which materials are used?

In order to learn playfully and to use creative ways, children need special materials. 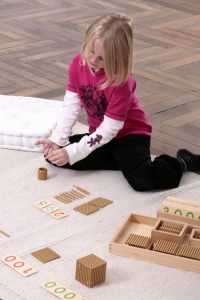 Already 100 years ago they were developed by Maria Montessori and they are still used today. In the prepared rooms, the materials are usually offered according to a specific theme in freely accessible shelves, so that a child can specifically deal with a specific topic with very different learning units.

Among others, these include:

Of course, this is just a tiny selection of what is ultimately used. The bottom line is that the children are taught all the important things. From mother tongue to mathematics, natural sciences, foreign languages ​​and culture. Only the methodology is different and demonstrably very successful.

The children work calm, focused and balanced. They are perceived as individuals, not as one of many, and this, of course, strengthens the personality.

The advantages of Montessori methods

At first, all this sounds more like Walddorf school and anti-authoritarian education. But far from it. While in the classical teaching method the mass is trimmed to a level regardless of personal strengths and weaknesses, children are valued and treated as individuals at the Montessori schools.

The educators are demanding a lot and not everyone is able to implement this concept. A very high level of patience, respect and acceptance form the basis of this responsible task.

Although teachers take on a passive role, which must not be regarded as idle. The educators assist the children with important decisions:

A task that requires respect, free thinking and the detachment from conventional guidelines. But it is precisely from the economy, research and even industry that the voices are getting louder and louder, that one does not seek cloned workers, but free spirits, creative people who want to make a difference in the world. However, this does not succeed after the conventional learning method.
If you have children yourself, you will notice at the latest when you enter the school that conventional methods destroy much of your creativity and enjoyment of learning.
It is astonishing that a young Italian doctor recognized 100 years ago what could hardly be more current.