This is not a commercial blog. You can find information about my own books at "Left". Well-known children’s book authors and illustrators should tell us their favorite children’s books (other authors) here.

I met Birte Müller when she was still studying book illustration with Rüdiger Stoye in Hamburg. In the meantime, she has published over 20 picture books. Among them as beautiful as "Goodbye, Grandma", as bizarre as "Fritz Frosch" and as personal and impressive as "Planet Willi". The book that tells the story of her son Willi, who was born with Down syndrome. A book that I would really like to recommend to you.

But now to Birtes favorites, or to Willis book tip, as she writes:

"I find it awful when lecturers in the discussion of book projects argue the preferences of their own children use. "So since I have a child myself" the sentences begin and usually end with the fact that they now know exactly what children like, namely happy, cute, and of course supposedly always recognizable and familiar.

An absolute favorite book of my childhood (which contradicts all of these characteristics) was the "apple man" by Janosch. When I read it to my daughter today, the tears come to me often, the story of the man who wishes nothing more in life is so sad that an apple should grow on his tree. The uncompromising and painterly pictures are so impressive – perspective doesn’t matter and really nothing, but nothing in them is cute either. But today the story no longer seems to me as complete as I may have felt as a child. I have the feeling that it should end where the apple man returned sadly from the market: laughed and ridiculed, with his one giant apple, which had FINALLY grown on his tree and which nobody wanted to buy it. Maybe Janosch was also sitting opposite a lecturer at the time who said that since she has had children herself, she knows that stories must always end happily. I thought I had a very vivid memory of this book, but when I read it for the first time the other day, I realized that I only remembered the point up to which I find the book unbeatable to this day. I had simply forgotten the happy ending.

My own children haven’t really changed my taste in books, even if I admittedly buy one or the other book with elves or fairies for my three-year-old daughter Olivia. Finding books for my five-year-old son Willi is more difficult. The “normal” boy his age would probably like pirate books or something like that, but Willi just throws something at my head. Willi has a very exquisite taste, I manage to introduce at most two to three new books a year, which then have to be read out excessively. In fact, Willi could act as a kind of bestseller agent, e.g. the “Very Hungry Caterpillar” and “The Little Mole Who Wanted to Know Who Made It on His Head”, which are among his extremely minimalist selections. But also one or the other youth literature award winner was already among his favorites (however, there is also a book by Nelson that has plastic wheels and one by Xenos that makes horrible music, but I don’t think that both really apply). 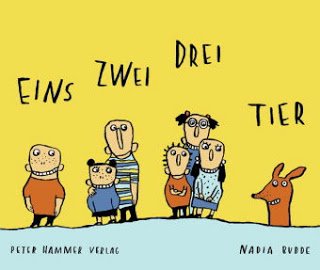 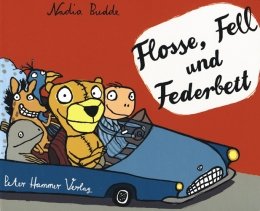 We bought "fin, fur and feather bed" from Nadja Budde and Willi fortunately took it up in his illustrious circle of tolerated books ("sad tiger toasts tomatoes" and "early in the morning at six, the little lizard comes" so far not made in his Hall Of Fame). "Fin, fur and feather bed" is the ultimate proof that a child may not have to understand ANYTHING from a book to read it heart love! Willi definitely doesn’t know the words "moths" and "trot", nor can I imagine anything under "trotting with cockroaches" or "whispering with shells" in my opinion.

The absolutely perfect rhythm of the rhymes, with a constantly changing pace, in combination with the incomparable charm and wit of the pictures, make this book to Willis absolute sleep-partying book! Willi doesn’t know most of the animals in the book and he may not even recognize the animals he knows, but that doesn’t matter! I think I’m really lucky, with Willi’s taste, because with "fin, fur and feather bed" we have the same favorite book! I read it without batting an eyelid with pleasure five times in a row and if we then chew with the "peacocks" and "bark with the trout", then I’m sure to have almost as much fun as Willi. It’s a good thing that the book is a cardboard, otherwise we would already be on the tenth copy … meanwhile the book looks like laminated, so much tape sticks on all sides. We love this book so much that we even cry with owls until eight o’clock in the morning. Or not? Then put out the light! ”Thanks Nadia Budde for this great book!"