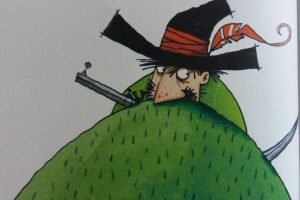 Three weeks ago, the interim episode "The robber Hotzenplotz and the moon rocket" about the robber Hotzenplotz, Kasperl and Seppel was with Thienemann publishing company published. In terms of content, the narrative is simple compared to the previous books:

Kasperl’s grandmother reads the newspaper in her kitchen. Kasperl comes along and wants mushroom soup with bacon, onions and dumplings for lunch. When Kasperl wants to start looking for Seppel, he runs into Sergeant Dimpfelmoser. He forbids Kasperl to leave the house because the notorious robber Hotzenplotz "broke out of the syringe house" half an hour – and five minutes ago (p.9f).

Kasperl calms the excited police officer and assures him that he and Seppel will catch the robber again. Kasperl makes his way to the garden to wake Seppel, who is taking a nap in the gazebo. Seppel’s spontaneous exclamation "I could shoot him at the moon!" (P.14), however, gives Kasperl an adventurous idea. Immediately the two friends get to work and zealously drag cardboard, paste and silver tape out of grandmother’s basement into the garden. And now begins the size handicraft!

A huge silver cardboard roll will soon be ready and Kasperl will write "moon rocket" on it in black. The monster comes along with a few cords and sacks on the grandmother’s hand cart and off it goes to the robber forest! The robber Hotzenplotz is meanwhile lying in the bushes and snoring loudly takes a well-deserved break. He wakes up in the middle of the most beautiful robber’s dream and discovers Kasperl and Seppel, who are loudly struggling with the special cargo on the cart and are involved in an argument. The two of them simply cannot agree on who is allowed to fly to the moon to bring the moon silver there. The robber Hotzenplotz doesn’t believe his ears and jumps right at their feet. With the pepper gun held up, he asks the two brawlers to shoot him with the rocket at the moon. And now the space flight starts: First, the two friends slip the robber on a potato sack as a space suit. The robber is strapped in tightly with the cords and, last but not least, is dropped into the rocket. When the rocket is loaded, it comes onto the handcart and on this launch pad the wild journey back to the town begins. In addition, Kasperl and Seppel keep counting down the countdown and when they finally reach the top of the mountain ridge, the wild moon ride can begin. In the meantime, the robber has also realized that he has been cheated. But Hotzenplotz is so well packaged that it can’t move. At last the moon rocket stops in front of the guard room of the constable Alois Dimpfelmoser. He cannot believe his luck at first. But finally a solemn triumphal procession to the county town prison starts.

In the end, the successful day ends in the grandmother’s room. As promised, Kasperl, Seppel and the constable Dimpfelmoser serve the steaming dumplings and the mushroom soup. 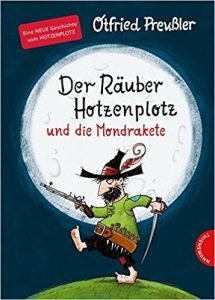 The story and its dialogues originate from the stage play "The Journey to the Moon", which appeared for the first time in 1969 in a puppet theater collection by Thienemann Verlag. Otfried Preussler wrote the piece in 1967 during a creative break on his youth book “Krabat”. The puppet play was discovered by his daughter Susanne Preußler-Bitsch in 2017 in the estate. Preußler-Bitsch brought it into the narrative form and the story was illustrated with illustrations by Thorsten Saleina.

I find the narrative entertaining and some dialogues and developments really amusing. When I read it for the first time, I got stuck during the introduction and was not fascinated by Otfried Preussler’s book introductions. The framework of the grandmother who prepares the food in the kitchen cannot be compared to Otfried Preussler’s style in terms of language and dialogue. In his other works, the author seemed to effortlessly immediately draw the reader into the idyllic world of his protagonists.

Even if the illustrations with the brilliant pictures J.F. Trips of the old robbers Hotzenplotz volumes from the 1960s can not keep up, I still find them successful, humorous and appealing. The first picture on page 4 is an eye catcher. What I missed, but immediately noticed to my daughter: completely hidden in the upper right corner of the kitchen window, an eye of the clever robber peers into the grandmother’s cozy kitchen. The floppy hat with the red brim and the red feather is also small. This makes it clear to the attentive child: the robber Hotzenplotz is roaming freely and is already looking for new victims … This creates excitement.

Similar to Axel Scheffler, Saleina portrays people and animals with round eyes in this book, so the villain Hotzenplotz does not look scary. The book is recommended for children from 6 to 8 years. Due to its design, I think it is also suitable as a reading book for younger children. This is also indicated by the book format, which moves between the picture book and the first reader book. I personally like Salenka’s stupid portrayal, despite who also do not neglect the originality of the representations of nature and the homely living environment.

A nice children’s book that can offer first-time readers a simplified introduction to the Kasperle series or can exist as a fluctuation between the first and second robber Hotzenplotz volume.