Once upon a time there was a stone,
has neither head nor leg.
He saw the people whet,
he saw people rushing
and often saw her thinking
contort her head,
and he saw some bumping
and stumble over yourself
and thought: What is the meaning of such a life??
Man always wants to go somewhere else.
Just why . Question mark,
it is for stone softening.
I am always here and never there
and smaller than America.
I am a part of this world,
and where i am,
there is happiness.

Then came the little Mattias Bacon
and threw it away in a high arc.

The stone flew away .
In a nice arc .
And said when he landed:
I’m always here and never there!
And then whispers very quietly:
What are we stones wise.

Fredrik (Fritz) Vahle was born in Stendal in 1942. The parents – both artists (painting, tapestries, word-graphic collages) – moved from the former GDR to the Federal Republic in 1956.

After graduating from high school in the Bergdorf school, he studied German and politics, became enthusiastic about Bert Brecht and Heinrich Heine and took part in a duo "Ulli and Fredrik" (with Ulrich Freise) 1968 his first LP with songs including according to Heine. After completing his studies, he increasingly devoted himself to the children’s song, but still works as a lecturer at the University of Gießen (doctorate in sociolinguistics, habilitation on children’s language and children’s song).. 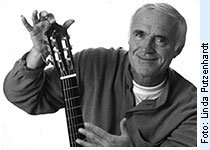 First own children’s songs are created when working with a group of children with learning disabilities together with Christiane Knauf. This is followed by regular appearances in kindergartens, children’s shops, bookstores, libraries, also at folk festivals, children’s song festivals in large and small halls at home and abroad. Fredrik Vahle publishes books, MCs and CDs for the new children’s song. He travels to the Mediterranean region and other European countries as well as Mexico, Cuba, Nicaragua and Paraguay. In addition to children’s books, books on Central America and the Spanish poet F.G. Lorca. He also works on various theater and music projects for children and adults. The main occupation remains the own children’s song during this time collaboration with Dietlind Grabe-Bolz as singing partner.

Fredrik Vahle has mainly been working on in recent years "new movement songs", d. H. Those who want to exercise and be flexible, but also take impulses from other movement cultures and new types of movement (including Tai Ji and QiGong and Feldenkrais). He gives advanced training workshops for adults, in which he demonstrates the practical pedagogical work with the songs and them with reflections on the topic "Language and movement" combines.

This topic is also the focus of his current teaching position at the University of Gießen. Also in the educatorFredrik Vahle is involved in further training for teachers, also in

Cooperation with Goethe Institutes B. in Paraguay and Warsaw. Appearances at congresses as well as at his. Fredrik Vahle was a co-initiator of the German Children’s Song Congress, has taken on various patronages, participated in fundraisers and has received numerous awards, including the Federal Cross of Merit.

In the twisted branch of the wryneck

The water preceded the fish

I am talking about Pedro

Manuel or the journey to the beginning of the world

Adapted to the times and in verse

With pictures by Helme Heine

Together with F. Naumann

Frederico or life is not a chicken game

With illustrations by Mathias Hütter

Look, the little king is coming

My most beautiful songs

If you want to remember poems, just become a community member.