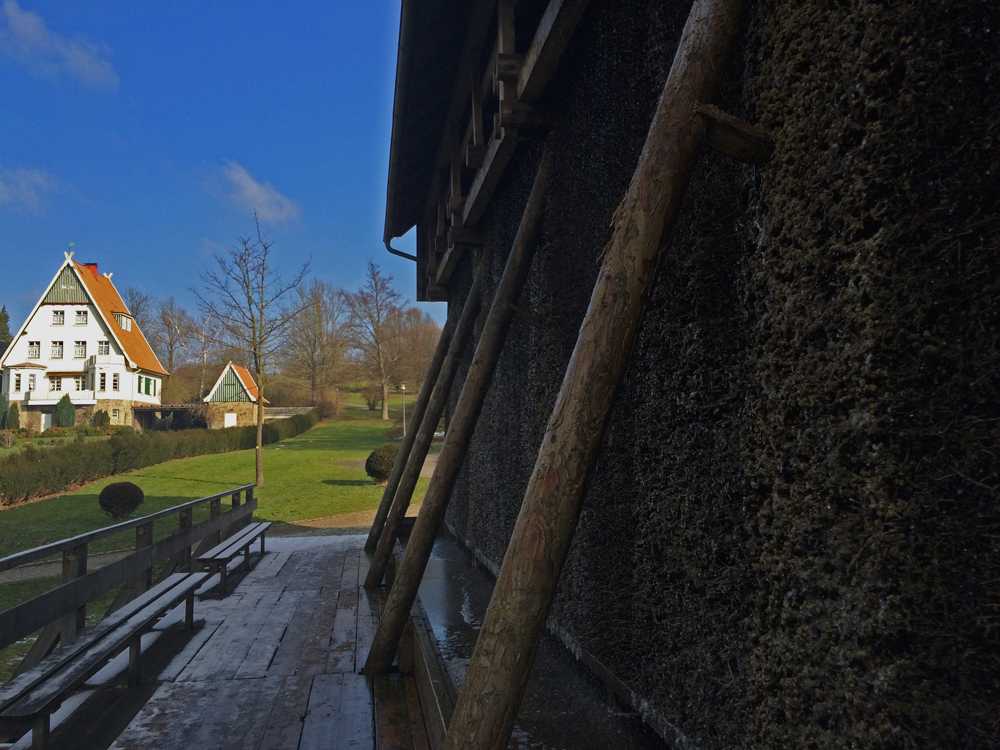 Pretty half-timbered houses have many cities in Lower Saxony. Bad Münder charms its visitors with a luminous river, witches’ trees and creative shops. Driving is worthwhile. Tips for Bad Münder. For many years I drive to Bad Münder and give seminars there. The little village but lured me rarely – somehow it seemed to me provincial and like everyone else. But today the winter sunbeams glittered on the snow and I walked through the city with time. Not just just run fast errands, but open to discoveries. And lo and behold – Bad Münder showed me a quite surprising face.

February is a cold – but Bad Münder has a prescription to clear the airways – the graduation tower. Sitting there should seem like a walk on the sea. The water runs in fine droplets over the wall and the released aerosols are intended to strengthen the mucous membranes of the respiratory tract. But the sound of the rushing water is like a vacation. As can be read in front of the tower, Bitterwasser, brine, sulfur and iron trickle down the walls – a wonderfully healing haze.

The city center with its half-timbered houses alone is already very picturesque. But among the shops are hidden creative tidbits beyond the boring store chains. Pieksigel for example with self-sewn caps and pillows for small children. In the queietschbunten patterns is guaranteed good mood. Or the former Wäschehaus Krone: here in Bad Münder grandmothers seem to be embroidering like mine back then. That somehow touches my heart. And although the tigers are not my taste, I could imagine buying the ABC.

4. Angel wings
In the middle of the city angel wings dangle in a tree – a pretty picture. The fact that they promote a funeral home does not bother me – death is part of life, and that’s what lives here naturally.

5. Witchwood Süntelbuche
This tree grows only here – the Süntelbuche is typical of the area. A gnarled beech that really sprawls. From the outside, her figure resembles an umbrella – but it’s worth it to crawl under Ästetippi. It is reminiscent of childhood huts – and grown naturally.

6. Off to the Hofcafé
Eating and drinking in Bad Münder is not difficult – right next door is the Hofcafé Volker in Nettelrede. Wonderfully romantic with delicious homemade cakes:
www.hofcafe-volker.de

7. Melt the glass yourself
And if you have time left, take a look at Bad Münder’s industrial side. Here the glass industry is strong. In the city center, she has created a special work of art in public space, where an artificial river lights up. And with the association Forum.Glas visitors with a bit of luck can find an appointment to melt their own works of art from the fragile material. http://www.forum-glas-bad-muender.de/kurs-glasfusing.php

So boring? That is not Bad Münder certainly. You just have to look closely to find the treasures.