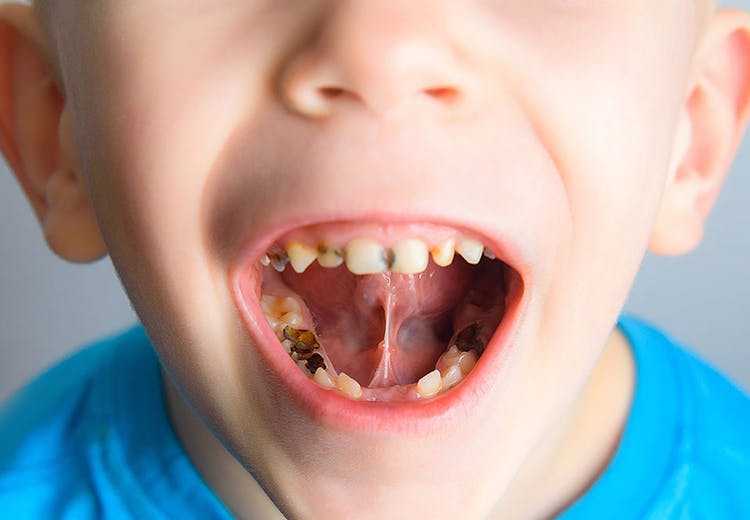 Initial caries doesn’t hurt. Brownish discolorations or bright spots on the teeth can be first signs. A carious tooth reacts sensitively to hot and cold and also to sweets. However, pain only occurs when the caries has already penetrated to the dentin.

In later stages the dark to black discolorations of the teeth are clearly visible. An unpleasant taste in the mouth and unpleasant bad breath can develop. The disease can be prevented by careful and regular dental care.

Caries is the most common disease of the tooth: 95 percent of Europeans are affected. Caries can already occur in the milk teeth, and in middle age it is present in almost everyone.

In caries, minerals are broken down from the enamel – a hole is formed. This mineral degradation is caused by bacteria contained in the plaque (see below). The bacteria form acids from the carbohydrates in the food. These acids destroy the enamel. The discolorations result from the storage of coloring food (tea) or tar (smoker).

Caries that forms on the edges of dental fillings is what doctors call secondary caries. Even under old fillings, caries can often reappear.

Plaque consists of saliva components, metabolic products, food residues and bacterial cells. On the cleaned tooth surface, proteins from the saliva accumulate and form a film which moistens the tooth surface and protects it from abrasion during eating. Bacteria adhere to this film within a few hours. Plaque forms the basis for the development of tooth decay. If it is removed after a longer period of time, whitish changes in the enamel often become visible underneath. These bright zones already indicate damage to the tooth.

Tartar develops when the plaque calcifies. Blood components are also trapped under the gum line and appear darker as a result. Tartar has a rough surface due to the minerals it contains.

This irritates the gums and it becomes inflamed because bacteria and microorganisms can store and multiply particularly well in this rough surface.

Brush your teeth. Plaque is most effectively removed by brushing your teeth, preferably after every meal. If it is not possible to brush your teeth after eating, it makes sense to chew sugar-free chewing gum. Chewing stimulates the production of saliva, which contains bicarbonate and neutralizes the acids formed by bacteria for at least a few hours. Once a day, the hard-to-reach interdental spaces should be cleaned with dental floss or special brushes (Teeth, p. 436).

A very good way to check the effectiveness of dental cleaning is to buy plaque dyes in the form of tablets or solutions. The dyestuffs contained in the plaque dye are temporarily stored in the rough plaque and indicate affected areas. In this way, it becomes clear which areas are not reached enough by the toothbrush. Then the toothbrush can be cleaned.

Nutrition. A healthy and balanced diet (p. 110) can prevent the development of tooth decay. Plenty of fruit and vegetables provide a basic diet rich in minerals and vitamins that protects the teeth.

Limit sugar consumption. To prevent tooth decay, it makes sense to limit the amount of sugar-rich food as much as possible and above all not to eat it over long periods of time. After snacking, it is important to brush your teeth carefully. Infants should not be given bottles of sugar-containing juices or paps to fall asleep in bed.

Removal of tartar. Toothbrushes can do nothing against hard tartar. The dentist can remove stubborn plaque with various instruments. The firmly adhering tartar is removed by oscillations, among other things. Finally, the tooth surface is polished smooth with rotating brushes or rubber cups. The dentist can also use polishing pastes and polishing strips. It is also important that overhanging and unpolished fillings are repaired so that niches are inspected in which deposits can easily form.

Fluoride containing agents. A sufficient supply of fluoride halves the caries risk. Fluoride is built into the tooth substance. An intake of 0.06 mg fluorine per kilogram body weight is considered optimal. It makes the tooth much more resistant to the attack of acids and therefore has an anti-caries effect. Fluorine is mainly found in mineral waters, black and green tea, whole grain products, sea fish and fluoridated table salt.

Infant foods often already contain fluoride as an additive. However, overdosing must be avoided at all costs: Fluorine is toxic when taken in high doses. If children are given more fluoride during tooth development than the recommended daily dose, the tooth substance can change and white spots appear on the teeth.

Fluorine is also effective when it is applied directly to the enamel: Toothpastes are a very good source: children from the age of four and adults should brush their teeth at least twice a day with fluoride toothpaste. This reduces the growth of tooth decay by half.

Tooth seal. Dimples and cracks in the tooth surface are very susceptible to tooth decay. Milk teeth often have a very irregular surface. To smooth them out, it is a good idea for the dentist to apply a thin layer of tooth-coloured plastic to the tooth and cure it with light irradiation. However, regular renewal of the sealant is necessary. Children whose milk teeth have been sealed have up to 80 percent less tooth decay than children whose teeth have not been treated.

What affected people can do themselves

If carious damage has already occurred to a tooth, only a visit to the dentist can help.

Decisions with your doctor

In most cases, the caries centre is removed completely with a dental drill. Still relatively rare are more painless methods such as lasers or special gels, which can dissolve caries, used. Various materials can be used for dental fillings: amalgam, tooth-coloured composites, glass ionomers (complex special cements for the dental field with very high biocompatibility), ceramics and gold.

If the caries reaches the nerve, a local anaesthetic is necessary to avoid pain.

Tooth fillings should be checked regularly for leaks. Ten-year-old amalgam fillings may no longer seal and must be replaced. Bacteria and acids can then penetrate into the tooth, causing caries under the filling.