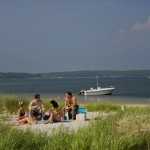 The clean sandy beaches along New England’s 9,650 km coastline have always been popular with locals and visitors from all over the world. And who wouldn’t enjoy fresh lobster on a lobster shack, fried clams and homemade ice cream on a long, hot summer’s day? Once you’ve had a beach holiday in New England, you’re guaranteed to come back!

Connecticut has a lot to offer in midsummer: Beaches, bays and boats. And not to forget Lobster Shacks. Some of the state’s most beautiful beaches are in the south, not so far from New York, including East Norwalks Calf Pasture Beach, where British troops landed during the Revolution. Today it is more peaceful and relaxing. A little to the east is Westport’s Sherwood Island State Park, Connecticut’s first state park. If you’re looking for a bit of power, drive to Compo Beach in Westport. There are basketball and beach volleyball fields, but there are also picnic areas with barbecues.

Famous for its lobster festival in August is the historic town of Milford, but the beach is also worth a visit: Silver Sands State Park has a beautiful sandy beach from which you can see Charles Island. According to legend, Captain Kidd has buried his pirate treasures here. Today, there is a bird sanctuary, and at low tide, one can even walk there. The beautiful Hammonasset Beach State Park in Madison is fed with fresh water from the Long Island Sound and the Atlantic Ocean. It has often been chosen as Connecticut’s most beautiful beach, and with its two miles width it is also the longest coastal park in the state.

Further east, in East Lyme, is Rocky Neck. This white sandy beach is very popular with the locals, who come to picnic, hike, watch animals – and of course swim and fish. Bluff Point State Park, a coastal sanctuary, is located on a peninsula that stretches far into the Long Island Sound. Not far away is Mystic with its famous Mystic Seaport and Groton is home to the Submarine Force Museum. 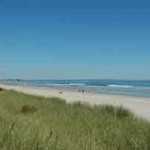 Many visitors to Maine first think of the rugged coastline – and are then surprised at how many beautiful long sandy beaches there are in the south of Maine. Here you can relax after an extensive shopping tour through the Kittery Outlets with their 120 shops.

The region around York also has many beaches and the popular Nubble Lighthouse photo motif to offer.

In the language of the Abenaki Tribe, Ogunquit means “a beautiful place by the sea”: so it is no wonder that many artists have settled here since time immemorial. Today you can enjoy the five kilometres long dune sand beach, walk along a coastal path and eat delicious lobster in numerous restaurants. Just 20 minutes to the north are the coastal towns of Kennebunk, Kennebunkport, Arundel and Cape Porpoise, also known as the Kennebunks. Kennebunkport has some beaches, great shops and boutiques. A trip along Ocean Avenue, where the summer residence of the 41st US President George Herbert Walker Bush is located, is worthwhile.

Old Orchard Beach is completely different, where everything revolves around entertainment, both during the day at Palace Playland Park and in the evening with dancing at the pier, fireworks and concerts.

Crescent Beach State Park is located 13 km south of the port city of Portland in the picturesque Cape Elizabeth.

Popham Beach State Park is a six kilometre long sandy area at the mouth of the Kennebec River. British settlers founded Popham Colony here in 1607, but did not stay long. Instead, they built the Virginia, the first sailing ship in the New World, and sailed back to England. This marked the beginning of a long tradition of boat builders on the Kennebec River. Today you can see the lighthouses off the coast guarding the Kennebec entrance, and at low tide you can walk to Fox Island. Further north is Reid State Park with its large sand dunes, a paradise for birdwatchers. 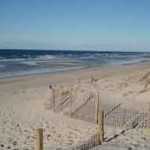 There are dozens of beaches in Massachusetts. North of Boston, in Ipswich, is Crane Beach with its famous seashell restaurant, Singing Beach in Manchester (named after the “singing” or squeaking sand under your feet), and Good Harbor in Gloucester.

The south coast offers spectacular beaches. The Horseneck Beach State Reservation in Westport Point with its wide beaches is one of the most popular state parks in Massachusetts. Further east is Buzzards Bay.

Among the most popular beaches in the USA are Cape Cod and the islands with over 100 public beaches. The beaches to the north of Cape Cod in the bay are ideal for families with small children, while there are stronger waves on the ocean side. One of the top ten beaches in the USA is Coast Guard Beach, one of the many beaches belonging to Cape Cod National Seashore. Here you can swim, watch birds, or simply relax on the beach and enjoy the magnificent dune landscapes and the view of the Atlantic Ocean. The beautiful beaches of Martha’s Vineyard and Nantucket are also popular and have always been a favourite destination for celebrities. From here ferries depart for Falmouth, Hyannis, Nantucket, New Bedford and Woods Hole (Massachusetts), Quonset Point (Rhode Island), Montauk and New York City (New York). 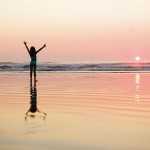 Even though New Hampshire has only about 30 km of coastline, there are still magnificent sandy beaches.

In the historic town of New Castle, not far from the beautiful harbour town of Portsmouth, you can visit the Great Island Common, a huge park on a hill from where you have a great view of the sea and the beach.

But of course, especially in New Hampshire there are countless possibilities to swim in fresh water, because in the Lakes region alone there are 273 clean and clear lakes and ponds. 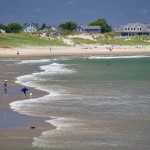 Newport is right by the sea and has many great public beaches, including Easton’s Beach (also known as 1st Beach), where there are even sanitary facilities. There is also the Save the Bay Exploration Center. The waves of Gooseberry Beach on Ocean Drive and Third Beach in Middletown are perfect for swimming. Not far away is Sachuest Beach (also known as 2nd Beach), the largest beach in the region, also with sanitary facilities so you can spend a whole day relaxing. The beach borders on the bird sanctuary “Norman Bird Sanctuary” and the “Sachuest Point National Wildlife Refuge”.

An absolute jewel is Block Island. With almost 30 km of beautiful public beaches and dramatic rock faces, this is the perfect summer destination. The 25 square kilometre island is 20 km from the mainland and can only be reached by ferry (or your own boat). The island is famous for its relaxed atmosphere – pure relaxation! It is best to take a bike, explore the island or go to the 3 km long Crescent Beach to enjoy the famous Ice Cream of Block Island. 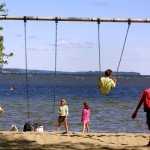 The eastern coastline of 180 km Lake Champlain is also known as New England’s West Coast. The combination of lake and mountains is simply spectacular.

Not far from the Canadian border are the Champlain Islands, which are particularly idyllic in summer: Alburg and Grand Isle, Isle La Motte, North Hero and South Hero. Milton on the mainland is home to Sand Bar State Park, with a beach for recreation, swimming, hiking, cycling, kayaking and boating.

Numerous lakes in Vermont have great beaches: Lake Willoughby, Echo Lake, Lake Elmore, Lake Eden, and the inexpressible Lake Memphremagog, half of which is in the USA and half in Canada.

Find out more about Vermont and Vermont beaches in summer.