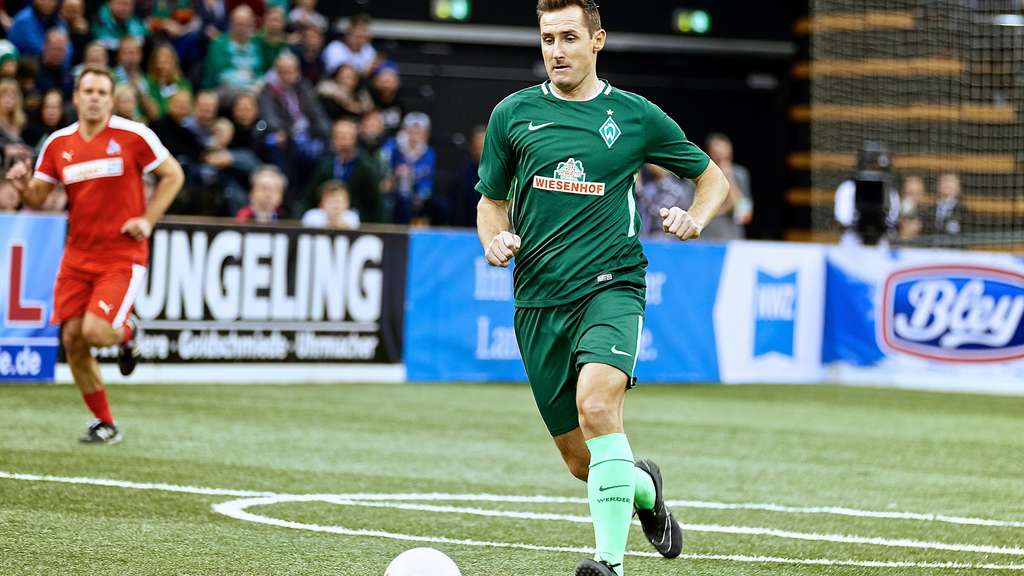 Klose with debut for traditional team

The world champion in the Werder jersey

Oldenburg – From a visual point of view, it has hardly changed. Basically not. Still that upright walk, those quiet movements, that shy look. And above all: still the figure of a professional football player. Miroslav Klose would have on Friday evening too good and like to be able to play in a Bundesliga game.

Or in Series A. Just as you like. But he didn’t. Klose has been a football retiree for a good year, and so it happened that the 2014 world champion made his debut in Oldenburg on Friday evening at the age of 39: that of Werder’s traditional team. She dominated the tournament in the EWE arena and offered the very best football-entertainment: 6: 1 final victory over 1. FC Köln and a total of 23: 5 goals. Four of them by Miro Klose.

Resentment of the Werder fans forgotten

"It’s fantastic here. We met the evening before the tournament and had a nice meal together, ”said Klose, whose departure from Bremen in summer 2007 was anything but silent. Admittedly, that was a long time ago. So only so much: Many Werder fans more than resented the striker’s move to Bayern Munich. "It was difficult back then," Klose looked back. "But only a very small circle knows how it really went at that time." He didn’t want to say more. He didn’t have to either. The resentment of most Werder fans has long been forgotten a good ten years after he left Bremen. The evening in Oldenburg proved that. Klose received by far the loudest applause when introducing the players. A real world champion, here in the hall! Then the people clapped. "That was really nice. Definitely better than being insulted, ”Klose joked.

On the pitch, it was mainly top scorer Ailton who made Bremen’s highlights with twelve goals, but Klose was also celebrated for every successful action. His starts are still explosive, his hooks are still similar to those of a skier. All in all a very fit appearance. "Fit is relative," Klose said. “I couldn’t do a game over 90 minutes now. But I travel a lot, which keeps me busy. ”

The ex-professional has been completing a training program at the DFB since autumn 2016 and will soon have his Trainer A license in his pocket. He is currently supporting some of the association’s U-teams. "It’s super nice. We have so many great talents, ”he emphasized. So one day there will be the coach Klose. Curious: The trainer Klasnic already existed in Oldenburg.

Because Klose’s former Bremen storm partner Ivan Klasnic, the second half of the legendary “K-and-K-storm”, could not play for health reasons, he supervised the team. "He coaches us very well, has the right Address and gives good tips, ”said Klose. With a smile.

He became a little more serious when it came to the current sporting situation of his former clubs Werder and Kaiserslautern. Both deep in the table cellar, some in league one, the others in league two. “I keep track of all the teams I’ve played on. That’s normal. A piece always gets stuck, ”said Klose. "Of course I hope that Werder doesn’t descend. The same applies to Kaiserslautern. It looks even worse there. "

Either way: The rhombus on the chest was still pretty good for Miroslav Klose even after ten years. He scored 63 goals in his career for Werder. His children were born in Bremen. No wonder that Klose likes to remember the city. "Anyone who knows me knows that I am not someone who only looks for the slices and sees himself as a Bayern or national team player. I also had a great time in Bremen, ”said Klose. Some Werder fans should like to hear that.