The Twike – one of the most economical electric cars ever

The Twike may be considered one of the most fuel-efficient electric cars – not only the streamlined design, but the special way in which it incorporates the passengers.

The Twike has only three wheels and in addition to the strong electric motor also bicycle pedals to join. Who steps on the pedals, relieves the engine and thus increases the range of his electric car.

Pedals to join? Sounds like an e-bike. But at speeds of 85 km / h and 600 kilometers range Twike 3 does not have much to do with a bike anymore. The newest model should even 200 km / h Bring top speed on the clock.

The vehicle has a fully glazed pilot’s seat, is controlled by joystick and is lots of fun. Windscreen wipers, lights and turn signals – everything is on board, which also has a big car. With 270 kilograms, the model 3 is much lighter and so also comes on a particularly high range; the future model 5 comes to a maximum of 500 kilograms (just over a third of the weight of a BMW i3).

Range is important – read about electric cars and their ranges.

Finding a parking space is no longer a problem with the Twike 3. The small car is ideal for the city and thanks to its 85 km / h in the top can also drive on the highway.

The Twike 3 can be configured and ordered online. In the basic version, a single battery is installed. With this, the vehicle can travel about 50 to 65 kilometers. If you also want to drive more routes, can be installed up to six more batteries. Then the mix of electric car and e-bike goes up to 600 kilometers at a stretch thanks to extremely low battery consumption.

Technical data of the bike car:

With the Twike 4 the Fine Mobile GmbH developed a vehicle, which is located between motorcycle and car and shows a high cornering stability. The Model 4 was designed from the beginning not as a production model, but as an intermediate step to newer models. With the prototype, the company took part in several international competitions: In 2010, the e-car bike came in 3rd place in the prestigious X Prize, in 2012 it won the electric vehicle rally “E-Miglia”.

The technical data are sporty:

In the basic version with a single battery are 130 km / h top speed and a range of 185 kilometers in it. The most powerful model, on the other hand, has a strong 200km / h and 550km range before it needs to be recharged. This enormous range is impressive for electric cars. It is also built stably – even snow and gusts of wind are no problem for the Twike 5.

Before the new model 5 is manufactured, at least 200 orders must be received. If you do not want to wait that long, you can take the predecessor and trade it for the Twike 5 later. 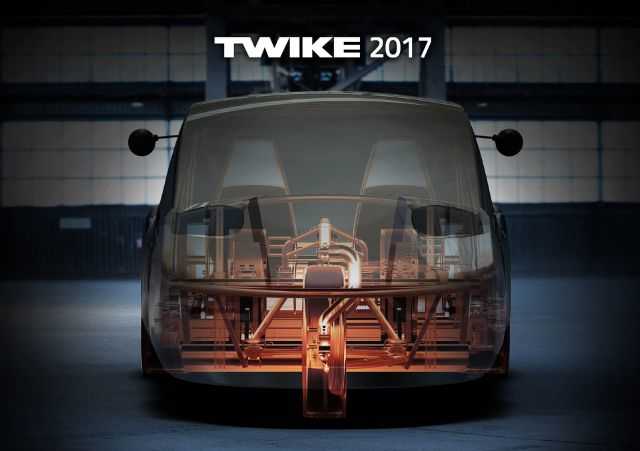 The preliminary model gives an insight into the mechanics. (Photo: © FINE Mobile GmbH)

Yes, the Twike is more of a lifestyle product than an e-car for everyone: it’s ecological and sporty – but also comparatively expensive. Almost as expensive as a real electric car. Also in terms of safety, the small electric car 3 can not compete with conventional cars. In a frontal or lateral impact, it should be relatively safe, so calculations by ETH Zurich.

Nevertheless, the Twike 3 has now gained cult status and is an eye-catcher on the road. It also revolves around a rider community that meets regularly. In addition, the Model 3 has the lowest energy consumption of a car at all: only four kilowatt hours of energy it needs for 100 kilometers.

As with all newly registered electric vehicles, the Twike is exempt from road tax for the first ten years. The electric car premium in the amount of 4,000 euros, but buyers can not apply. Because it does not apply to light vehicles such as Twizy or Microlino, which also includes the Twike. Therefore, by the end of 2016, the manufacturer has awarded itself a prize of 1,000 euros, when customers have fueled their vehicle with electricity from renewable energies.