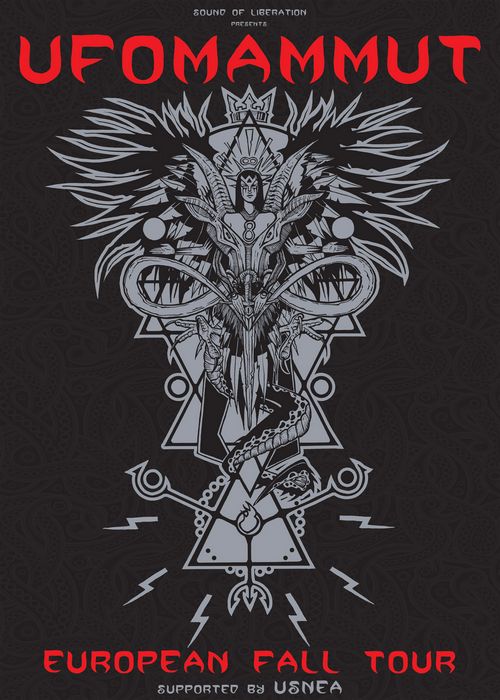 Ufomammut is a power trio formed in 1999 in Italy by Poia, Urlo and Vita.
Ufomammut is worldwide recognized as the creator of a unique brand of psychedelic sludge.
With long songs, droning vocals and massive effects the band combines a monumental riffing attitude with the psychedelia of the more visionary Pink Floyd.
Since the beginning, Ufomammut has been developing his own sonic way: “Godlike Snake” (out in 2000), the band focused on a second album “Snailking” (2004).
The third album “Lucifer songs”, out in 2006, opened the new doors, the result of a mature and tight-knit band. The flaming spatial voyage of “Snailking” remains as their core sound, evolving alongside new soundscapes made of sinister atmospheres and gloomy sounds of vintage electronics.
“SUPERNATURALS ‘Record One” is an improvised session between Ufomammut and Lent0 out in 2007.
Create a monolithic album, prelude to “Earthen” of Lento and sequel of Lucifer Songs by: a guitars, a bass, synth, vocals and drums Ufomammut.
With monolithic and repetitive riffs submerged by a psychedelic and magmatic sound, “Idolum” brought the band to a new level of sound in 2008.
Evey, the fifth album, 45-minute atmospheric track, divided into five distinct movements – acts as a living homage to the first woman on earth, and the rebellion to her creator for bringing knowledge to Mankind comes out in 2010.
Eve is an undeniably infectious and utterly devastating piece of doom.
ORO, divided into ten massive movements, and 2 chapters (Opus Primum and Opus Age) came out in two separate pieces during 2012 for the American Neurotics Recordings.
Oro explores the concept of knowledge and its power, the magical stream controlled by the human mind to gain control of every single particle of the world surrounding us.
Oro is like an alchemical laboratory in which substances are flowing, dividing and blending themselves in increments from the alembics and stills, culminating in the creation of gold.
In 2014, Supernatural Cat (record label of Malleus rock art lab, artistic collective featuring Urlo and Poia with Lu) released XV, a visual journey to celebrate 15 years as a band.
The dvd includes over three hours of live footage – including magickal mastery live, a 12 song live act – interviews, outtakes, and extras all documenting these first fifteen years of the band.
UFOMAMMUT’s status as one of the most potent, powerful and artistic contemporary doom artists in existence continues to captivate the masses, and the band’s worldwide grasp grows against each release.
In fifteen years the band has reached the US West Coast in 2009 and Canada in 2014.
Ufomammut has performed at international music festivals like Roadburn, Hellfest, Dour Festival, Ieper Festival, Asymmetry, Stoned from the Underground, South of Mainstream, Festival d’Affaire, Metalride Fest, FIMAV, Up in Smoke Festival and many more … sharing the stage with bands like NEUROSIS, DOWN, BARONESS, RED FENCE, AMEN RA, FU Manchu and many more.
Ufomammut’s live show is supported by the internationally acclaimed video and graphic art of Malleus, a rock artists’ collective who conjures up the entirety of Ufomammut’s visual impact.