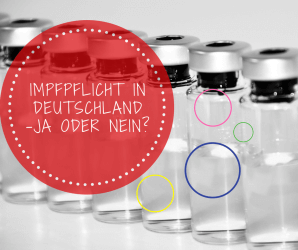 1. pro – compulsory vaccination in Germany – that speaks for vaccinations for all children

When I build a house, I go to a construction company. Because they can do that better. If my computer is broken, I will have it repaired by a specialist. I know the computer to a certain extent how to use it, but woe does not concern it. Then I can only knock on it, nothing more. Fortunately, there are experts. At some point in history – presumably we were still sitting in caves – humanity decided that everyone should specialize a little. Today we are masters of specialization.

And now such a human body is a bit more complex than a little house in the green and even a super modern MacBook. Doctors are certainly not gods in white, but they are experts in their field who should be interested in their opinion about the human body. Your opinion matters. There are decisions in life that I can make from the gut, but the decision which medication or whether a vaccination for the body important is, making this decision from the gut is dangerous. But unlike from the gut, as a layperson, it doesn’t work at all.

I would never have put so much energy into the vaccination question if there was a compulsory vaccination. Not just because I wouldn’t have had a choice anyway, but above all because of the charisma. As an inexperienced parent, the question arises: If the researchers and doctors and smart people agree that great, useful and good vaccinations are, why don’t they have enough confidence to make them compulsory? A mandatory vaccination would be a clear signal for the effectiveness and the safety.

Today, when I read how people in Internet forums talk shop about the effects of various antibiotics, the need for treatment and also about vaccinations, I get scared and scared. Convincing others with your own gut feeling is a no go. Taking responsibility for your own child is one thing. To base the responsibility for someone else’s child on your gut feeling. Phew. I’m having trouble there. So many false claims are circulating. For example, the link between vaccination and autism has long been disproved. The study was fake. One might think that this is now known, but such false statements persist. And that’s terrible. A mandatory vaccination would at least ensure that false experts no longer give advice on the vaccination question. (I would like the same with regard to sleeping pills in children….)

And then there is the herd protection. The central argument in Italy. The World Health Organization (WHO) originally aimed to have measles eradicated in Europe by 2010. Well now. That didn’t work. The reason is the poor vaccination rates in many countries. If more people had opted for vaccination in the past, we would no longer have to have such discussions today.

Cons: And what speaks against compulsory vaccination in Germany?

Maybe I’m weird, but somehow this “being a mature citizen” is important to me. We parents have parenting authority – in theory. But schools, kindergartens and others get involved. We parents feel we have to fight for every straw of self-determination that we want to keep. And we should try to keep our age where possible. But what is crucial: maturity is not an end in itself. Taking a decision on your own also means not only blindly following an opinion, but also thinking, recognizing, weighing and filtering yourself.

Surely you can judge people who decide differently about vaccination than you do. Surely it can be annoying when children run around without measles vaccination and can infect babies or sick people. But free choice also means that someone else decides differently than you do. That is freedom. And I understand people who have a bad feeling about doctors and the pharmaceutical industry. The quality of medical care in history has been demonstrably poor at most times. At best, we can laugh about many methods today, such as the treatment of syphillis with mercury or the much-quoted bloodletting. We know better today. But can we know that vaccinations will not be out of date in 500 years?? No, we cannot.

To be a responsible citizen and a responsible parent: This also includes giving other people the competence to determine their own and their children’s lives. Even if it’s difficult. But what I would like: that people who make decisions based on their gut do not make themselves experts. That only advise people on vaccinations who actually have a medical background. And that’s why I’m not telling you today whether you should have your child vaccinated or not. Or what vaccinations mean have children. It doesn’t belong here.

I am not sure whether I would like vaccination in Germany or not. Can you think of arguments for or against? How do you handle the vaccinations? Your opinion is important for me!