I recently dealt with the topic of "violence among children" in a reflection discussion with a head of the daycare center. After a short consideration and some astonishment, she said that violence among children is a highly explosive topic. As an expert at KiTa-aktuell.de, I have recently been receiving more and more questions from Kita leaders who report extremely inappropriate behavior, excessive emotional reactions and impulse breakthroughs in very young children. 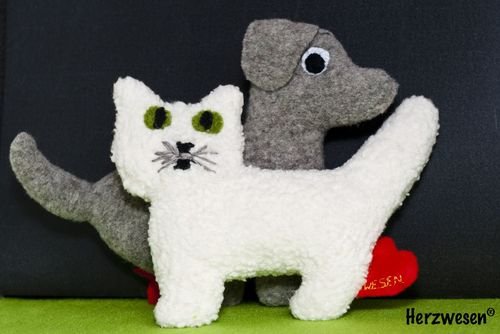 Work non-verbally in the event of aggression with soft toys.

From my 2 years of working in a child and adolescent psychiatric and psychotherapeutic institute outpatient clinic, I have often noticed the consequences for a child who was exposed to the violence of peers. But the children, too, who carried their impulses violently, had great suffering and needed targeted support.

Research studies on the subject of violence show that between 10 and 20% of boys and girls between 3 and 6 years of age show abnormal behavior. Anger, aggression, breakthroughs in impulses, the senseless destruction of toys or objects can be observed. Physical attacks, punches, kicks and verbal threats are also forms of expression that must be classified as inappropriate and behavioral. Dealing with children with behavioral problems and who are not emotionally regulated has become a very big challenge in the daycare system – and therefore also an additional burden for everyone.

Symptoms at the body level may appear in the form of eating and sleeping disorders, chewing nails, wetting or vomiting (after the child has been dry for more than half a year). On the other hand, the child’s psyche can react with excessive anxiety, shyness and symptoms of dejection, depression and sadness. Concentration and attention deficits are common.

In the social field, aggressiveness, extreme tantrums, impulsiveness, fidgeting, overexcitement and a high level of distraction can be other forms of expression for what a child cannot process otherwise. A low self-esteem, a weak or negative self-assessment can be a consequence of this.

Identify causes in the child

Factors such as hereditary dispositions, dispositions, developmental delays, possible complications during pregnancy or birth defects, serious illnesses, disabilities, nutritional deficits, allergies and hypersensitivities as well as other dispositions in the child also play a role here.

In recent years, I have also had stressed children in the training courses – e.g. after the death of a parent – as well as children from refugee families who had a lot to do at a young age. Children with refugee experiences have had the worst and most stressful experiences. They often had great fears, showed unpredictable behavior or forms of high excitability. They can be understood as an expression of severe suffering, disturbance and confusion in the child’s soul. Recognizing the extent of traumatization is always the responsibility of specialists, the symptoms of withdrawal, flight and fighting behavior, speechlessness, isolation, anger, aggression and violence must always be properly understood and classified. Work that is sensitive to trauma is necessary.

Causes in the reference family

If parents convey pampering, overprotection, an authoritarian or anti-authoritarian upbringing style or an inconsistent upbringing as a core message, they do not offer a safe space for healthy and continuous development opportunities for children. The children often feel misunderstood, rejected, unloved and guilty, have little understanding of the rules, and often remain dependent on their parents. This inhibits them in their own individualization process. They hardly learn to develop their own means of expression and in the worst case are even disoriented in their own development.

In the reference family, children can learn family communication patterns, unusual interaction patterns, as well as ways of reaction in the form of punishment, anger, fear or concern on the model of their parents, if they do not convey clear messages, and thus internalize them. Under these circumstances children do not learn to express their thoughts, feelings and needs clearly, to listen attentively and with understanding or to determine the meaning of misunderstood messages with the help of questions.

This, in turn, often leads to children trying to attract the attention of others with undesirable reactions. This is especially the case when children are emotionally and socially neglected or because of extremely high expectations, the praise of the parents is rarely expressed. If these patterns last for a long time, the children behave conspicuously outside the family.

Other causes of behavioral problems in children can also lie in the relationship with other children in the group. During the training sessions, I often saw in protected small group work that children open up more to their feelings and needs when they report that they suffer a lot from not having friends, are hurt, sad or angry when they are not play more allowed to. Feelings of loneliness as well as withdrawal, because the self-image is getting weaker as well as excessive willingness to use violence with high potential for aggression and tantrums can alternate and explode as if out of nowhere in a previously peaceful group of children and make everyone very insecure.

From a course in a social hotspot daycare center, I followed a story very much when I was confronted with that too emotional Violence among children is not uncommon. And children also learned this "violent" communication and internalized it as a language pattern. In parenting coaching, I therefore often work with the model of "nonviolent communication according to Marshall Rosenberg" (more information under "Nonviolent Communication" on the Internet).

I would like to report on a course where I also integrated children from refugee families into the groups. In one course, a 5-year-old girl from West Africa was apparently subjected to children several times. These attacks were very covert and not noticeable to the teachers and me. This is also part of the violence among children, which is not always clearly to be discovered and in which immediate support can neither be given for the violent child nor for the offended child. If a girl lies on the floor in the group and the others report that she has been insulted several times as "black" and "ugly", this is an insult to her personality and can unfortunately also have a major impact on self-image and self-esteem and thus have on the girl’s identity. In the group, this conflict was dealt with very carefully and appreciatively with the children. It was then possible for me to initiate trauma-sensitive work with the girl, her mother and her caregiver.

So that violence doesn’t escalate further

I have developed a basic attitude in the accompaniment of children and parents and as a coach in the field of education and I believe that everyone does their best at all times. Nevertheless, it can be helpful to reflect on your own behavior again and again in order to be able to adapt flexibly to the needs of an individual child. In social focus daycare centers, I met children with special needs, which also led to excessive demands. There were little or no opportunities to discuss problem cases in a team, as part of a collegial case coaching or in supervision, which would have made it possible to gain new perspectives on established behaviors and patterns.

Find a conversation with the parents as early as possible

It is essential to inform the parents early on what exactly happened. If the basic attitude for a conversation is used to want to understand the child, it is easier for parents to bring more openness and understanding for clarification. It makes sense to avoid power struggles in the conversation with the parents over the question "Who sees it correctly?", Because ultimately the child is the focus.

If you take a look at this mostly escalating communication from the systemic side, feelings of powerlessness and helplessness, anger, despair, resignation, lack of understanding in this highly explosive topic gain a lot of space and only allow a few solutions. Sometimes parents will also remain resistant to advice and educators will reach their limits.

Offer parents’ evenings on the topic of “Prevention of violence in the day care center”. I have very good experiences myself with workshops for parents when I consider opportunities for careful and non-violent communication in the family. Here, the parents can try out concrete communication with other parents, the feedback is very helpful to help them understand each other better. From my own work in the daycare centers, I repeatedly find in the conversations how important it is for parents to build trust, in order to open up without running the risk of being condemned for their views. This is a great opportunity if you already have good offers installed and parenting is taking place with some continuity.

It is a sign of your own Ability to reflect and competence if you offer the parents help with psychosocial services, e.g. the youth welfare office, the early childhood or educational counseling center. Particularly striking behaviors are sometimes based on enormous dynamics that have to be viewed in a very complex way. A social pediatric center (SPZ), the pediatrician or a child psychiatric outpatient clinic with qualified specialists and multimodal approaches can help to clarify this. Please note that all listed offers of help are passed on to parents as a recommendation. Other procedures may be necessary – however, it is imperative to comply with all legal requirements and channels as well as data protection regulations!

The well-being of the child – motivation and strengthening

If you observe the child’s activities in different situations, it is helpful to document the reactions precisely in order to recognize recurring processes and regularities of problematic behavior. Get a comprehensive picture of what the child does well, where his competencies and potential lie. Here you enable the child to change perspectives and prepare the foundation for resource-oriented work. The knowledge gained from this is supportive to guide interventions in such a way that you have a better view of the good in the child.