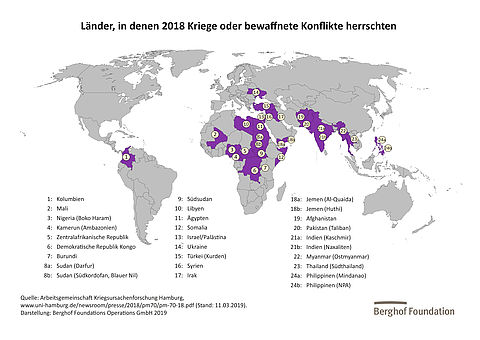 A total of 28 wars or armed conflicts took place in these countries in 2018 (according to the Working Group on Cause of War):

In brackets: region or conflict party

That is quite a large number and when you look at the world map, numerous countries are colored.

War is a term used to describe violent conflicts that persist and are organized. One of the warring parties must be a government’s regular armed forces. If these characteristics are not met, one speaks of an armed conflict instead of a war.

Not all wars affect an entire country, many are confined to a specific region of the country. In some countries there are several war regions, such as India and, since 2017, the Congo.

Some wars have been going on for many years, such as in Sudan. Other wars have broken out even though they have ended, for example the conflict in Burundi.

A war and two armed conflicts started in 2018, namely in Cameroon, between Israel and Palestine and in Burundi.

The good news is that there will be one in 2018 decline from 31 to 28 conflicts. 2018 were two wars and four armed conflict ended. The war in Russia ended in the North Caucasus and in the Democratic Republic of the Congo the war in the Kasai region that started in 2016. The armed conflicts ended in Myanmar (Rohingya rebels), Algeria and Tunisia, and between Armenia and Azerbaijan.