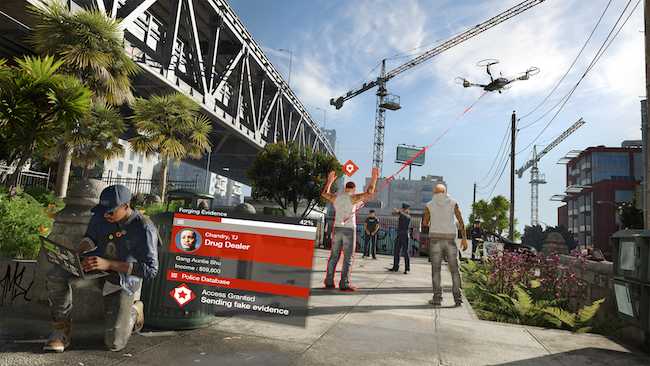 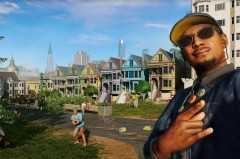 Game description:
While in the predecessor title still the hacker group DedSec in Chicago drove its mischief, plays Watch Dogs 2 in the fictional San Francisco Bay Area. This time the players take on the role of the hacker Marcus Holloway, who rebels against the city’s surveillance system with a hacker group. Once again, they set themselves the goal of paralyzing the “ctOS” surveillance system installed in this region and ridding the city of the “Big Brother”. Together with like-minded people, Marcus hacks tools, uses various modern technologies, chases with the police, and exchanges with other organizations. From a third-person perspective, explore either on foot or with a vehicle an open-world ambience and trying to spread the hacker app.

Educational Assessment:
Surveillance State 2.0
Watch Dogs 2 thematically reminiscent of Orwell’s classic “1984”, but in the mirror of today. The term “Big Brother” used in the book also appears repeatedly in the game.
The city of San Francisco and its citizens are being watched by the government through the surveillance system “ctOS”. The traffic is regulated and everywhere cameras are installed to convey misconduct directly to the police. The program stands for safety, transit programs and mass data. With 6.4 billion connected devices (including personal smartphones, toys, consoles, home security systems, vehicles, etc.), citizens’ daily routines are also recorded to create digital profiles. These are bought and sold for marketing purposes, but also carry the risk of being stolen. In addition, insurance companies and health insurance companies have access to the data to determine the liability or health status. In this way real fears of the future of the modern mass media are taken up and become a bitter reality.

Hero or villain?
The proximity to the game GTA is unmistakable, only one plays in this adventure not targeted the villain, but a kind of anti-hero. Marcus Holloway is an all-rounder. He is an excellent hacker and masters stealth, climbing and martial arts. Together with his hacker crew, he commits a lot of crimes – but they act in their view for a good cause. Marcus is, so to speak, “like a modern Robin Hood” (Oscar 18 years, HOT Schildesche). The group sees itself as a revolutionary, they act against the system and for a free society. In doing so, the players have to get involved again and again in moral decision-making. However, these have no effect on the game, so no direct opportunities are offered to challenge their own moral limits. If you want, it is also possible to end the game non-violently and only by hacking.

Limited open-world experience with detailed graphics
The visual representation is realistic and shows beautiful landscapes. The city of San Francisco is modeled realistically and also known adjacent places can be found, such as the Fisherman’s Wharf, the Silicon Valley or the island of Alcatraz. An open-world experience tends to wait for the players, but not all places are accessible from the beginning, but must first be unlocked.

The smartphone – the most important companion
As already mentioned, the smartphone is the most important companion. The device is not only used for hacking, but also fulfills other functions that are comparable to our smartphone use. In addition to the clock and the battery indicator, there are also various apps. So you can listen to familiar songs with the Media Player, let yourself navigate through the city with “Nudle Maps” or even take selfies of the protagonist with the camera. The hacker group communicates with each other via a messenger.

Extensive gaming experience for advanced players
There are different genres associated and so is Watch Dogs 2 both strategy and fighting game. “You can not simply kill opponents, as in GTA, but you also need a tactic, similar to Splinter Cell” (Oskar 18 years, Malik 18 years, HOT Schildesche). However, the game is not for beginners, because the level of difficulty is more aimed at more experienced players. Although there is help, such as an arrow indicating which direction you are in, the controls appear and you can always check a tutorial, but it takes a lot of practice to succeed. Often several attempts are necessary to complete a mission, because Marcus is shot for example and the procedure must be planned exactly. Just rumschießen usually brings nothing, because exactly must be targeted. Checkpoints used counteract the frustration, as in a retry not too much must be repeated.

Conclusion:
As in the predecessor, the players act as anti-hero and try to fight with criminal means against a total surveillance system – namely by Marcus, the protagonist, hacking into the system with his smartphone and tries to turn this off to spread their own app. The city of San Francisco and the various figures are depicted very realistically. The different possibilities bring variety and contribute to long-term motivation. The individual missions are tricky and require patience as well as good skill. Additional mini-games, such as puzzle games, enhance the overall experience of the game. The game testers would recommend the title to their friends, but believed that violence as the only means to achieve its goals and the criminal hacking methods, especially for younger ones, can convey a false sense of power in society.