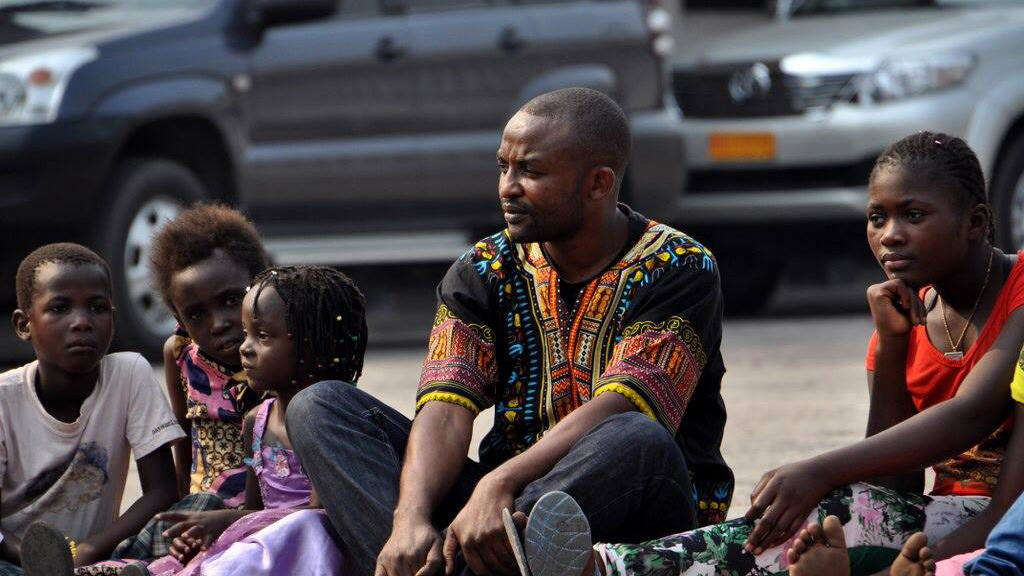 "We learned not to love anyone"

Junior Nzita was a child soldier in the Congo for ten years. He recently told his traumatic story in Frankfurt. With his work as a UN Special Representative for child soldiers, he fights against his trauma and for peace.

His youth was robbed of Junior Nzita when he was twelve. At that time, rebels stormed his boarding school in the Democratic Republic of the Congo. They shot wildly and kidnapped him and his classmates. He was a child soldier for ten years. Today he is a UN Special Representative for Child Soldiers and heads the organization "Paix pour L’Enfance" (Peace for Childhood).

He recently told his story at the community center of the Evangelical French Reformed Church in Frankfurt am Main. A 31 year old man, handsome, easy-going and charming. The trauma with which he lives has hardly left any traces on the outside, only a scar above the left eye is visible. But it determines his entire life. Not only because he rarely sleeps more than two hours at night. Without psychological help, Nzita has found a way to deal with his gruesome past: he makes it public.

It was Rwandan rebels who kidnapped teenage boy Nzita in 1996 and subjected him to a military drill. That meant: violent marches over thousands of kilometers, target practice, lashes and rapes. Many child soldiers are forced to go to their home villages and kill friends or even family members during their “training”. As openly as he otherwise talks about his experiences – Nzita omits this part in his story. It was too terrible to talk about it.

The former Belgian Congo colony, which is now called the Democratic Republic of the Congo, is rich in mineral resources, such as rare earths, which are used in technical equipment. "Everyone who owns a smartphone carries a piece of the Congo with them," says Nzita. But it is surrounded by resource-poor countries like Rwanda or Angola. That is why the government is repeatedly attacked by rebels from neighboring countries who – according to Nzita with the support of multinationals – want to take power in Congo. For this they need obedient and cheap soldiers who can use them as cannon fodder on the front line. Like children.

The UN Children’s Fund Unicef ​​estimates that there are currently 250,000 child soldiers worldwide. Armed groups such as Boko Haram and the terrorist militia "Islamic State" kidnap many minors. In South Sudan, 16,000 children are said to have fallen into these groups in the past two years. Fighters abused young people not only there and in Nigeria, but also in Afghanistan, Colombia, the Phillipines and Mali.

In his early days with the rebels, Nzita was taught nothing about military strategies. "We have learned to be relentless," says Nzita. Forgive no one, love no one. Nzita remembers how he went into his first battle against government soldiers. He was stiff with horror when he heard the first shots and saw that some comrades were hit. The stiffness was released when the first enemy soldier fell hit by a bullet from his Kalashnikov. He understood: "If I don’t kill, I’ll be killed myself."

Together with the rebels, Nzita walked and took thousands of kilometers to the capital, Kinshasa. He doesn’t know how many people he killed. The fact that he was then part of the government army initially did not change his fate.

His 13th birthday was one of the worst days of his life been, says Nzita. That day his friend died. Together they had wanted to retreat from the battlefield into a car. Then the friend was torn in two by a rocket. "I only had his upper body in my arms when the car started," recalls Nzita. "We just had to throw his body away." In the next village, a woman came to meet them. Pregnant, it seemed. Instead, she wore listening devices in front of her stomach. "When I noticed that, I cut her head off with the bayonet."

Nzita tells this story almost mechanically. When he sees the pictures from back then he gets a headache, he says. And how To recover from the atrocities he experienced as a child, he then speaks of forgiveness. God helped him. God had shown him that there is no use in hating people for forcing him to kill. Or yourself.

"I’m now criticizing the system," says Nzita. The system that people in a corrupt and economically weak country get guns on. Weapons that are produced in the West and would come to his home through the interests of global corporations.

Belief in God can be of great help. Nevertheless, trauma therapy would have been helpful. However, there are currently hardly any programs for this, although former child soldiers often suffer from post-traumatic stress disorders and are often constantly ready to be aggressive. "Sometimes I’m still drawn to war," says Nzita. He has only been in psychological treatment for a few months: The Swiss initiative “Trauma Healing and Creative Arts Coalition” (THAC), which was founded last year, arranged for an African psychiatrist. "Sometimes I can sleep three or four hours now."

The battle on his 13th birthday was not his last. In total, Nzita was in the army for ten years. It was a miracle that he had been allowed to go to school in the past few years. As long as Nzita was stationed in the capital Kinshasa and did not have to fight rebels or the armies of other countries, he had friends outside the army, even a girlfriend. He met them to play marbles, accompanied them to school and waited before they came out. When he was 16, his boss once called him over to him. He wanted to know why he was so sad. Nzita gathered all his courage and asked: "Where are your children now?" "At school," replied the boss. "I would also like to be there," said Nzita.

Shortly afterwards, his boss had an understanding and issued him a special permit. When Nzita was officially released from the army six years later, he was about to graduate from high school and lived with adoptive parents. A return to his parents and his four siblings was unthinkable: Former child soldiers are mostly rejected by their families as criminals and murderers. What about his family? Nzita doesn’t talk about that. Only his sad look gives an idea of ​​how it could look inside.

His family today there are 140 children who live in a settlement of the "Paix pour L’Enfance" organization founded by Nzita in 2010 and are looked after by war widows. “When I play with them, I can show the twelve-year-old junior what it means to be a child,” says Nzita. The fact that he enables others to have a childhood and fights for their reintegration into society has saved his own life.