What children need to know to start school 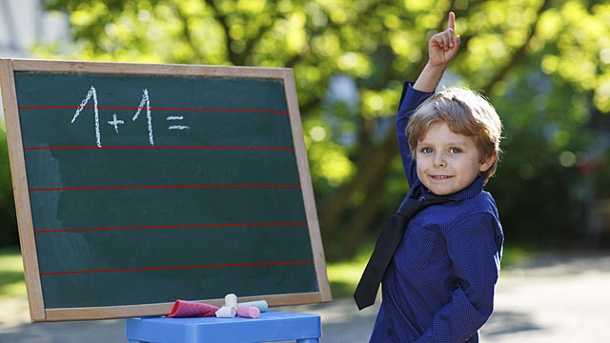 The differences between preschool children are getting bigger and bigger. (Source: Thinkstock by Getty-Images)

Kindergarten children become first-graders. Some of them can already read and write before the first day of school, others are still very playful. But what do school children really have to be able to do? We have asked.

“Of course, certain conditions must be met. For the transition from daycare to school, however, children do not have to be specially trained,” says Maresi Lassek, teacher and headmistress of the primary school on the Palatinate Route in Bremen and chairwoman of the primary school association. Above all, it is important that parents, school, nursery school and of course the child jointly shape school enrolment as a developmental step.

At pre-school age, children learn by playing, imitating, trying out, experimenting. Parents can offer their children a lot here: Reading aloud, table games, painting, handicrafts, building, cutting out – every interaction takes the child further. “What is traditionally referred to as play is the right and appropriate form of learning for children until they start school,” says Lassek confidently.

Apart from the family, the nursery school is the most important place of learning for preschool children. This is the first time the children experience themselves in a group – an important social experience. Respecting the rules, being together with other children – these are also important learning steps towards school. There, the learning process initiated by the family and the nursery school is taken up and continued – with an increasing emphasis on learning in didactically prepared contexts.

Children who come to school have already mastered basic learning processes. They have also acquired skills that are particularly important for starting school:

Important for parents to know: With a good relationship with their child, they have already taken “precautions” to make a good start at school possible. “It makes little sense to train knowledge in isolation,” says Lassek. “Children don’t just consist of knowledge. It is better to strengthen the child’s personality as a whole”.

The right satchel for your child

No cheap purchase – parents should involve their children in the purchase of a school bag. Video

Getting along in the group

When school starts, a lot of new things happen to a child. They leave their familiar surroundings and have to deal with new children and the teacher. “It is very important that children learn at an early age how to get along in a group,” says Lassek. First-graders should be able to express their opinions, but also to take a step back. They should respect the limits of others and at the same time ensure that their own limits are respected. They should be able to say “no”, but also to cope with a “no”.

“Of course, it is crucial for the school that a child can be easily reached linguistically,” says Lassek. Parents have a lot of influence to strengthen their children. Language and role-playing games are fun for children and at the same time they learn that words can be rhymed and structured. Children also develop a feeling for sounds (the sound of letters) – an important prerequisite for learning to write. “Again, isolated learning makes little sense, embedded in a game or a larger context, it unfolds a completely different effect.

Children wouldn’t have to be able to do arithmetic either. They should, however, be able to deal with quantities, for example, recognize that you can build a higher tower with a whole box of bricks than with a half. In general, playing and constructing with building blocks or Lego blocks is a mathematical exercise, according to the teacher.

“Children should move a lot, play a lot outdoors,” advises Lassek. “This contributes to their health and children who move a lot also train their mental abilities. Parents can support the dexterity of their hands by painting a lot with the children, folding paper and cutting it out. It is also good to make sure that both hands are used and “trained”, for example during finger games and building.

A child should be able to react to information and requirements from his or her environment, i.e. be able to absorb information, process it and translate it into action appropriate to his or her age. “The ability to perceive is important for the entire development of learning,” explains Lassek. Social perception (empathy) also falls under this category, because children must learn to decipher and deal with the feelings of others.

Enrolment as a stress situation

The experienced teacher notices that parents increasingly perceive school enrolment as a stressful situation. Education has gained in importance, fears of the future are more pronounced. As a result, some parents try more than before to make it easier for their children to start school by giving them special support long before the start of school, for example through language courses or by selecting a day care centre with a special focus.

At the same time, there has also been an increase in the group of so-called educationally disadvantaged parents, who are unable to support their children at all or only to a limited extent, and children who have another mother tongue as a result of their parents’ immigration, but who have to cope with literacy in the German language. As a result, some first-graders were confronted with a second or third language in kindergarten, while others do not even have a good command of their mother tongue. In the first grade, children with very different backgrounds meet.

Accepting this difference is a great challenge for schools. “The days when it made sense for all children to go through letter by letter at the same time are over,” explains Lassek. Instead, primary school today places a lot of emphasis on independent learning and allows children varying degrees of time to accomplish tasks. Some schools have dissolved the traditional classes due to the heterogeneous initial situations of the school beginners and offer classes for more than one year.

“Open and happy at school”

Lassek’s concluding advice: “Parents don’t need lists to work through what their children need to know to start school.” The different competences should not be viewed in isolation, because they intertwine and turn a child into a personality.

“The times when we talked about the ‘seriousness of life’ at school should be over,” says Lassek. “When children come to school curious, open and cheerful, parents have done everything right.