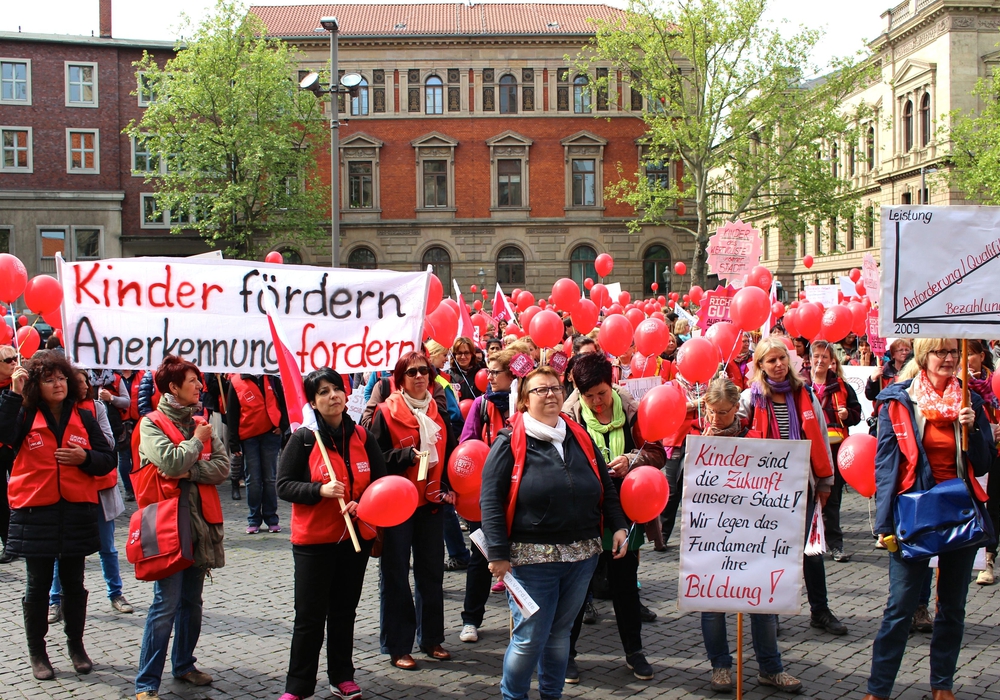 Braunschweig. RegionalBraunschweig.de asked the factions of the city of Braunschweig what they think of the mediator’s decision in the daycare strike.

For the Greens Councilor Dr. Elke Flake (deputy group leader and chair of the responsible youth welfare committee): "Basically, we consider it a positive signal that in the current wage conflict there is now an arbitration award for social and educational services on the table. We expressly welcome the revaluation contained in this compromise proposal, particularly that of

Educators from tariff group S 6 to a new tariff group S 8a. As Greens, we have long been committed to making social and educational work more widely recognized and better paid. Not only, but also because women are predominantly active in these professions, who are still financially disadvantaged on the job market (keyword “gender pay gap”). We hope that the two collective bargaining parties (the employers’ association VKA and the union Verdi) will soon agree. This would not only be in the interests of the employees, but also in the interests of the parents affected by the so-called "daycare strike". The additional costs resulting from the arbitration award would of course have to be borne by the city’s budget and the increased personnel subsidies in the state. That would of course be an additional burden on the household, but this must and can always be coped with in all tariff increases in the public service! Under no circumstances should the additional costs be counter-financed through the reintroduction of fees for day care centers. about In our opinion, the possible reintroduction of daycare fees should only be discussed in connection with a reduction in wages in the crèche area (care for under-three-year-olds) and school childcare – in the sense of a redistribution or in the course of a significant increase in equipment and quality. Especially in socially problematic parts of the city, we urgently need to reduce the size of groups and develop daycare centers into family centers."

"We are curious whether the arbitration award will be accepted"

Klaus Wendroth, chairman of the CDU parliamentary group in the city council of Braunschweig, explains the arbitration award in the strike of employees in social and educational services: "A conciliation decision must always make concessions to both sides, which seems to me to be the case here and therefore it should be a balanced compromise. After a rough calculation, we initially face additional costs of around 900,000 euros for the city employees. But the cost increases for the independent providers must also be offset by the municipal budget. However, the federal government and the state have an obligation here, because raising children in daycare centers is an educational task and the costs for this must be paid by the state. Thanks to the CDU parliamentary group’s freedom to pay contributions in kindergarten, we have already made an advance payment, and with the Braunschweig model for all-day primary schools, we are investing significantly more than we actually should. We are now curious whether the arbitration award will be accepted by both sides and whether the strike can be ended."

Councilor Jens-Wolfhard Schicke-Uffmann of the pirates said: "The arbitration award is a constructive solution, but not yet a result

. Of course, it would be very helpful for the parents if an agreement and a The End If I were an educator, I would continue to strike – the offer is far from what is demanded, and after the past month’s strike, everyone has become extremely aware of the importance of education. I still don’t think kindergarten fees are a good idea, because it makes participation in early education programs less attractive – and there aren’t many things in the city that are more important than optimal support for the next generation."

Gisela Ohnesorge from the left made the following statement at the request of RegionalBraunschweig.de: "The arbitration award is an upgrade of the social and educational services, even if not all requirements have been met. We would have liked the unions’ demands to be met more closely. It is not yet clear whether the arbitration award will be accepted by both sides. The problem A new strike would be to hit parents and children again, not employers as such, so it’s a difficult trade-off. It goes without saying that upgrading social and educational services costs money. We are holding a reintroduction of kindergarten fees

but for the absolutely wrong signal. On the contrary, it is also necessary to abolish childcare and school childcare fees. For example, no one today would seriously ask for school fees to be reintroduced to address financial bottlenecks. It is necessary that the federal and state governments participate more in the costs of education (also in early childhood), because the municipalities are always assigned new tasks that they cannot do alone."