Austria’s young people are “European champions” in smoking. This is no coincidence, because Austria takes last place in Europe when it comes to implementing legal tobacco controls, such as smoking bans in public spaces.

Vienna. First of all, the good news: cigarette consumption among young people is declining in Austria. Ten years ago, just under half of young people had smoked at least one cigarette in the previous 30 days, but now it is only around 30 percent. Nevertheless, Austrian teenagers are still “European champions” when it comes to smoking. Nowhere else do 12- to 18-year-olds smoke cigarettes more often. According to Statistics Austria, 27 percent describe themselves as "active smokers", meaning they smoke at least one cigarette a day – girls, 29 percent more often than boys (25 percent).

In contrast, the situation is reversed among adults – here 26 percent of men and 22 percent of women are active smokers and are thus also among the top in Europe – people with a lower level of education tend to smoke significantly more often than those with a Matura and university degree.

At the same time, Austria ranks last in Europe on the so-called Tobacco Control Scale – an indicator that measures the implementation of legal tobacco control. So factors such as the level of taxes on tobacco products, smoking bans in public spaces, raising awareness and awareness, advertising and marketing bans, warnings on tobacco products and smoking cessation offers. The fact that tobacco control measures are implemented less and less frequently in Austria than in all other European countries is the main reason for Bernd Lamprecht, Director of the Clinic for Pulmonology at the Kepler University Clinic Linz and General Secretary of the Austrian Society for Pneumology (ÖGP). that in Austria especially young people smoke. "When young people see that smoking is allowed in public spaces such as restaurants, they consider smoking to be tolerated, accepted and not particularly dangerous," says Lamprecht. A phenomenon that is also known from visiting a doctor. "If a doctor does not respond to a patient’s medical history of cigarettes, this is considered acceptance of smoking." 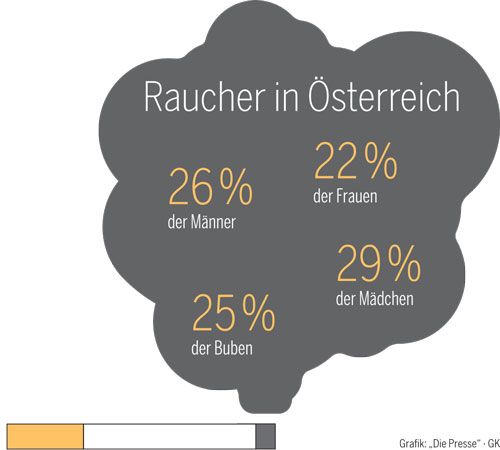 Another factor for the pulmonologist is the age limit in Austria, where you can buy cigarettes from the age of 16 – which will probably stay that way for longer. Health Minister Sabine Oberhauser (SPÖ) thinks it is "worth considering" to increase the limit to 18 years. However, since this is a matter for the protection of minors, it falls within the competences of the federal states, which in turn mostly do not consider an increase to be necessary.

Lamprecht explains that more girls than boys start smoking at a young age with their fear of gaining weight and the hope associated with smoking to stay slim. "What the cigarette industry uses deliberately," says Lamprecht. "With cigarette brands that are called slim and are particularly long and slim." However, fear of weight gain is not entirely unjustified. Because with cigarettes, many young people would suppress their feeling of hunger. In addition, if you stop smoking, you have a better taste sensation and would therefore run the risk of eating more enjoyably and more. With the planned ban on smoking in catering 2018 Lamprecht sees a big step in preventing young people from smoking. Because fewer adult smokers would mean fewer young smokers in the medium term because they would lose their role models.

Not a showcase country in Europe

This can also be observed in households – children of parents who do not smoke become more than 80 percent non-smokers. On the other hand, if two or more smokers live in the same household, around 50 percent of young people also start using it. Lamprecht also advocates more education and smoke-free apprenticeships or jobs. Because to find connection, young people would often smoke with their adult colleagues. Although there is no flagship country in Europe, Austria can, for example, take measures from countries like Great Britain, where the health insurance company pays smokers for weaning. In Germany, in turn, education in schools is exemplary. This also includes clearing up a widespread misconception about e-cigarettes and shishas, ​​which are becoming increasingly popular among young people. "Many believe that water has a filter function and that smoke is therefore less problematic," says Lamprecht. “But the water only cools the smoke, which makes it inhale deeper and cause even more damage. In addition, many do not know that the liquids in e-cigarettes can also contain nicotine and can be addictive. ”

Active smokers. 29 percent of girls (between twelve and 18 years old) in Austria describe themselves as “active smokers”, meaning they smoke at least one cigarette a day. It’s 25 percent for boys. The opposite is true for adults – 26 percent of men and 22 percent of women are active smokers – in principle, people with a lower level of education smoke significantly more often than those with a Matura and university degree.