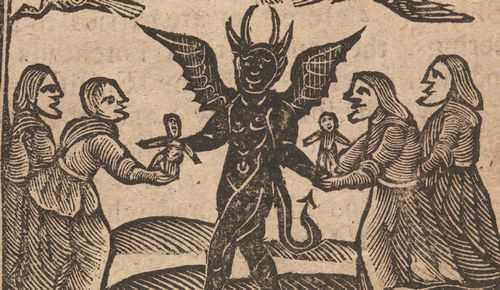 The belief in witches, sorcerers and other people who were involved with demons and the devil was already in antiquity and the early Middle Ages. It was easiest to explain unusual things. But it was not until the High Middle Ages that the idea solidified and disturbed more and more people. Illnesses, bad harvests and other negative events were declared witchcraft and heresy. Even the ever-growing independence of women could only be true devil’s work. And that’s why the witch hunt came about – they wanted to keep up the old order and not give the devil any chance.

“Witch burning” – supposed sorcerers are tied with their necks to a stake, surrounded by straw, which is later burned. In the background you can see an already burning straw building. From: Bilder-Cautio, 1632, UB Bonn Source: Katalog friedrich Spee, Stadtbibliothek Trier 1991, p. 114

In the Middle Ages, the terrible persecution and killing of alleged witches began, but the witch hunt weddings began earlier in the Middle Ages and unfolded in the early modern period. It is important to mention that the witch-hunt was justified by the belief in God, but the church was never really officially involved. The church merely demanded that it deal with heretics, and that it also distanced itself from torture and violence.

The persecution of the witches in Europe lasted mainly from about 1300 to 1750. According to recent research, between 40,000 and 60,000 people were victims of witch-hunts in Europe. On German soil died in total about 25,000, in southern Germany alone about 9,000 people. About 80% of those executed were women, with regional differences.

An early estimate from the end of the 18th century, which has since been refuted, speaks of 9 million executed witches, the Nazis had picked up this number for propaganda purposes again.

End of the medieval witch trials in Europe

With the advent of the Enlightenment, people began to question the phenomena in nature. Advances in medicine have made it possible to explain diseases. It was understood that not supposed witches are responsible for suffering. On the one hand, Protestantism became more popular, but on the other hand, the Church and the people were so much superstitious that the witch-hunt and killing lasted another century.

The last witch trial in Germany took place in 1749 in Würzburg, the last execution in German-speaking countries was that of a 17-year-old maid 1782 in the Protestant canton of Glarus in Switzerland.

In the Grand Duchy of Poznan in 1793 a traditional execution of a witch took place.

In 1836 on the peninsula of Hela (Gdansk Bay) a supposed witch was subjected to a water test by fishermen and, as she did not want to go under, she was violently drowned.

Wikipedia does not agree with the last execution in Germany here: “One of the last women accused of witchcraft Anna Schnidenwind was executed on April 24, 1751 in Endingen am Kaiserstuhl. Presumably, the last witch execution took place on Reichsboden 1756 in Landshut. On April 4, 1775 Anna Schwegelin was made the last witch in Germany because of Teufelsbuhlschaft in the monastery Kempten in the Allgäu. However, the judgment of the prince-abbot Honorius von Schreckenstein, who was granted imperial and temporal jurisdiction by imperial privilege (Campidona sola judicat …), was not executed, as the prince-abbot ordered the reopening a few days before the execution. However, the case was not pursued further, so that Anna Schwegelin 1781 died a natural death in Kempten prison.

Even today, there is persecution and discrimination of alleged witches who allegedly use damage spells. Think for To voodoo in Latin America. In Africa, people are still being charged, mutilated and / or killed by witchcraft. Because of great famine and poverty, for example, in the Democratic Republic of the Congo, children are accused of sorcery by their own mothers in order not to have to care for them anymore. These so-called witch children (mainly in Kinshasa) are being abandoned or murdered because the mothers can no longer feed them. In some African states, there are even explicit criminal provisions against witchcraft.

The number of people persecuted for witchcraft since 1960 is likely to be higher than in pre-Enlightenment witch hunts.

This is part of a seminar paper. The sources for all parts of the work can be found under the corresponding page.