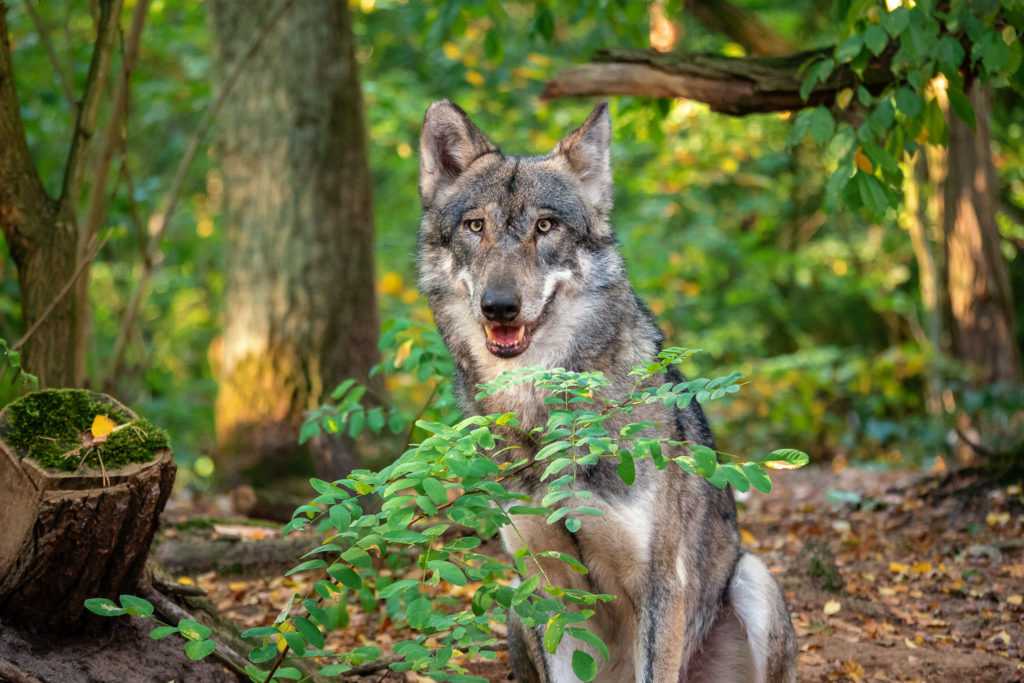 Wolves have been considered eradicated in Germany for a long time. But the shy four-legged animals are slowly returning to our homeland. In a wolf center in the Lower Saxony Dörverden you can learn a lot about the return of the wolves and experience the animals up close. In this article I tell you about our visit to Wolfcenter Dörverden and give you all the information you need for your trip.

Wolves are among the most fascinating animals for me. Already as a little boy these animals fascinated me and I dreamed of meeting wolves. Of course, I could not have imagined that only a few years later a pack would settle in Germany again.

Of course, the wolf not only triggers enthusiasm, but also arouses old fears. After all, it is a wild predator that should not be confused with a dog. In the public discussion on this topic, however, false information is often disseminated in order to exploit the emotionally charged mood for one‘s own purposes.

To face these problems, the Wolfcenter Dörverden has set itself the task of providing information on the behavior of wolves. There are several wolf groups in the center and there is an interesting exhibition in the main building of the complex.

Since Bina knows of course my sympathy for wolves, she has given me a two-day trip to the Wolfcenter for my birthday.

Full of anticipation, we arrived in Dörverden. Shortly after our arrival, a guided tour (included in the entrance fee), in which a member of staff explained a lot about the behavior of the wolves and answered the questions of the visitors, started. If the animals want, you can even howl with the wolves on such a tour. To do so, the bipeds must present and howl as a group. With a little luck, the inhabitants of the enclosure will respond to this howling. In our case, the European gray wolves joined in half-heartedly. Apparently, the pack had yet to cure his afternoon low. Finally we ran to the next enclosure.

“Meeting a wild wolf does not leave anyone cold. It touches something deep inside us, a place where we are still whole. “

(Elli H. Radinger in her Spiegel bestseller The Wisdom of Wolves *)

During the tour we visited three enclosures inhabited by wolves. Another enclosure where formerly Czechoslovak wolfhounds used to live is currently not used. However, the team is happy about the addition of two small puppies, so that soon four enclosures will be in operation again.

After the issue of herd protection was explained, we reached the last and perhaps most exciting stop of the tour: the feeding. At the same time I was allowed to throw the food into the enclosure of the wolves. It’s really interesting to see how the wolves target the food, jump through the air, collect the chunks of meat and finally choke the meat behind. I had the feeling that the wolves are developing a completely different view.

After about an hour, the tour ended, which was very enlightening and outlined a realistic picture of the wolf. I found it very good that although the importance of the wolf in our ecosystem is emphasized, the predator was not romantically glorified. 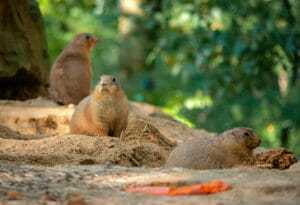 If you want to go to the Wolf Center with children, the little ones will not only be happy about the wolves. There is also a nice big playground for romping, a petting zoo with goats and sweet prairie dogs on the premises. The children will not be bored. During the summer season there is also a special guided tour for children on certain days. More information can be found below in the article at the opening times.

Staying with the wolves

After the tour we went back to our rental car and got out our luggage. Because we wanted to stay in the park. There are two possibilities for this:

We slept in a tipi during this visit. So we settled in the tent. Then we strolled a bit along the enclosure and finally grilled our dinner. As it got darker, we lit a campfire in front of our tepee and let the calm act on us. After sitting comfortably for a while, the wolves began to howl. What a fantastic moment! Listening to the wolves howling at the campfire – that’s what we had imagined – fantastic! But eventually it was quiet and it was time for us to sleep. 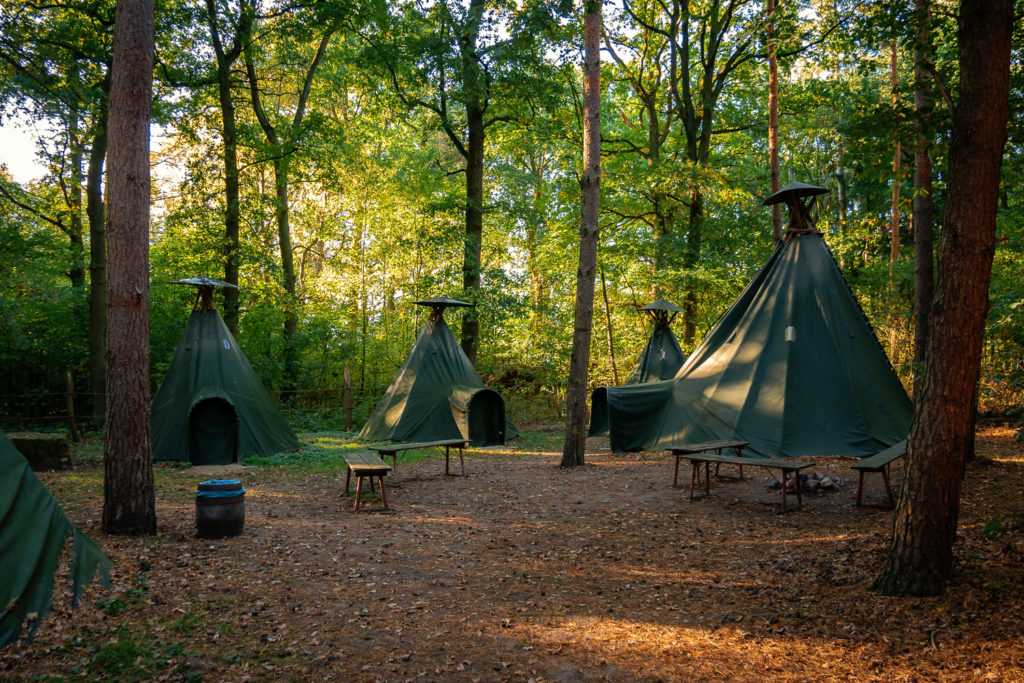 The tipi village in Wolfcenter

The second day in Dörverden

As we lay in our tepee in the morning, the wolves woke us again with their howling. At this time there were no visitors in the park and so really only the wolves could be heard.

We started the day with a rich breakfast in Wolfsrevier, the restaurant of the wolfcenter. The day we used to photograph the wolves. So that the metal bars of the enclosure do not ruin your pictures, you can rent a key for photo cloths, which gives you an unobstructed view of the wolves.

Later we visited the interactive permanent exhibition, which is very well prepared.

The absolute highlight of our visit to Dörverden was the direct encounter with two wolves. The Center currently has nine European Gray Wolves and two Hudson Bay Wolves. The Hudson Bay Wolves had to be reared by hand and that’s why they are used to direct human contact. I really wanted to take this opportunity and was able to talk to a colleague after a briefing in the enclosure of Dala and Kimo.

The two wolves were very interested and liked to be stroked. We spent half an hour with the animals, with Dala more interested in me than Kimo. I can not describe how beautiful that moment was.

Joyfully beaming, we left Wolf Center Dörverden in the evening and drove back home. In any case, many wonderful moments will be remembered and I can only recommend that you take a trip to the wolves in Dörverden. Further information can be found on the Wolfcenter Dörverden website at www.wolfcenter.de.

Well, is the Wolfcenter in Dörverden also an interesting destination for you? Do you still have questions? Then leave us a comment under this post!

Hey, I’m Francis – globetrotter, blogger and drone pilot. Since January 2015 I travel around the world with Bina. Always in the luggage is a camera drone, with which we capture the most beautiful places from the air. On our blog we share with you the best tips for your next trip. Do you still have questions about this article? Then write us in the comments!

Learn more about this topic

Discussions on the topic

Unfortunately, the reality looks a few miles from the Wolf Center different … confirmed Nahbegegnungen are everyday, torn sheep, now even a Shetland pony 11km away. The affected people and residents of the places where detectable and Official wolves in the place (!) See it differently here … has nothing to do with romance, Alaska and Co! And human shyness is alien-where did they learn that from …

Confirmed close encounters with foxes, rabbits and wild boars are also everyday – I see no reason why this is a problem per se. The wolf is part of our ecosystem. Rather, you have to learn to deal with this predator. Of course, the wolf also gets sheep if they are not sufficiently protected. In order to protect itself from such situations, the Wolfcenter performs important educational work and advises on how to protect yourself.

It’s not about romance and co.

On the subject of people-shy times differently asked: Why should not wolves know this? There are far more sightings of deer, wild boars and foxes than wolves. And if you really want to see a wolf in the wild, you usually have to bring a lot of stamina with it. Therefore, I think your statement is very daring, especially since many people do not even know that they live in a wolf area.

Yes, there are also animals that deviate from natural behavior. Sometimes these wolves were fed by humans. These phenomena must not be ignored. But the wolf is not as evil as he likes to be portrayed. And the existing problems can not be solved with such sweeping claims.

That must have been great and nice to read your enthusiasm here! LG