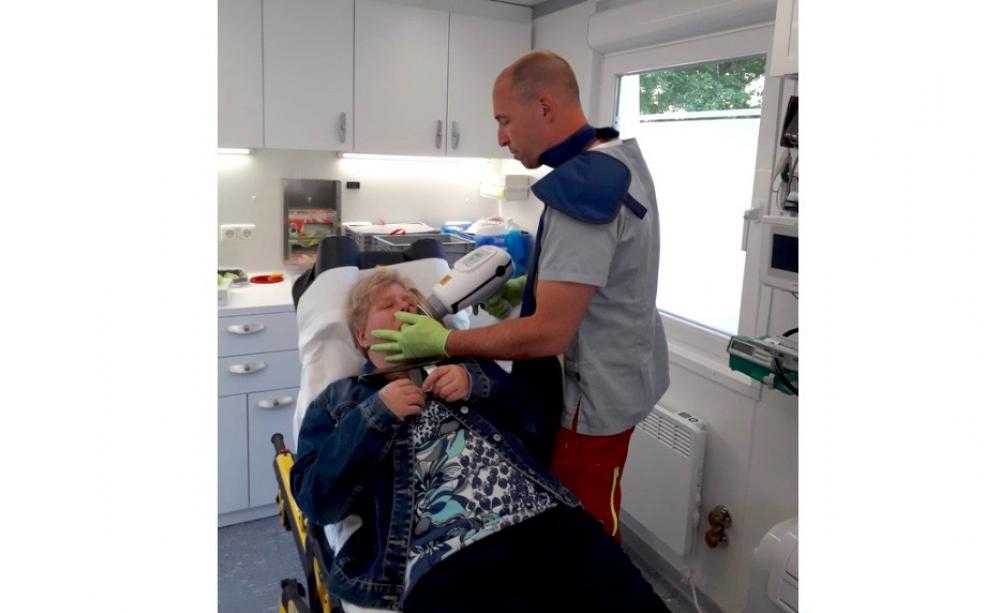 A mobile, handheld X-ray device? Is that right with things?? In this way or so, readers in the social media recently commented on the use of said device. It is used by Oral Surgeon Christoph Blum. He uses it in his dental mobile, He stops in front of retirement homes and facilities for people with disabilities to locally treat patients for whom transport is mentally and physically too strenuous. In an interview with dzw editor Evelyn Stolberg, he answers questions about his handling of the apparatus, which makes his working life enormously easier.

Dr. Blum, what hurdles you had to overcome before you got approval for the mobile, hand-held X-ray machine?
Dr. Christoph Blum: First of all, I was given a clear “no” because according to the radiation protection officer on the Landrat and according to the experts of the chambers there is no need to operate mobile handheld X-ray equipment in a practice. This would mean that, while there are CE-approved devices, they are not approved by the regulatory authorities. The University of Ulm MKG under the leadership of Prof. Geibel, however, in March 2018 a device like our registered for operation and received a permit.
On the basis of this approval, the Ministry and the SGD North had to first deal with my informal application and check whether a permit would be possible. After several hearings and discussions, it was concluded that there should be an on-the-spot examination of all parties involved, such as Ministerial Head of Department, two Expert Examiners of the Ministry, Director of Radiation Protection SGD North, industry representatives and practice team. It was found that behind the lead image no radiation is measurable and the image quality is very good in the resolution. It has also been established that equal and professional treatment is based inter alia on an X-ray and that mobilization and possible transport costs of certain patients are disproportionate for only one image. Therefore, the operation was approved subject to conditions after consultation with the Federal Ministry for the Environment.

What makes the device different in the handling of fixed ones?
Blum: The biggest difference is the ease of portability and operation by the clinician. The rays are the same and according to digital technology extremely low, also highly directional. The very short exposure times ensure a high image quality. In order to prevent possible radiation scattering and strain on the practitioner, a lead apron is prescribed for the practitioner despite the lead shield on the device. The obligate lead protection for the patient is equal to the usual practice. Due to the still new method and too little in-house knowledge of possible occurring rays, the user must also wear a film dosimeter under the lead apron and evaluate it monthly. So far all results are 0.0 μSv. Further, the application was limited to the most highly trained, that is, only the doctor with expertise may make the operation, not the staff, who usually do in practice, the X-ray.

Why does the use of mobile x-ray equipment make sense, for example in a dental mobile??
Blum: Many patients are immobile and must be transported for treatment. Thanks to the Zahnmobil, we have already been able to minimize this burden significantly. Nevertheless it happens again and again, that only by an X-ray a caries becomes visible, a cyst or apical osteitis is recognized or whose extent is clearly recognizable. Also, the preservation or non-preservation of the teeth is often clear after an X-ray. Since many patients are usually unable to consent, the diagnosis must first be completed in order to then coordinate a treatment plan with the caregiver. Only then can the procedure be carried out. Transporting an immobile, bedridden patient into the dental vehicle for just one image is also disproportionate and can be prevented by using a mobile, hand-held device on the nursing bed. On the one hand, tripod devices on castors are extremely bulky. On the other hand, industry and experts have also discovered that possible impacts during transport in the toothed mobile container would damage the glass tube.

Should the regulations be relaxed, so that even more colleagues get the opportunity to use such a device?
Blum: I am against relaxing regulations, but for a practical application of the existing legislation. In principle, there is no law against the use of mobile or handheld X-ray equipment. In our case, the experts and the ministry clearly recognized the practical benefits and applied the margin of discretion with clear rules. I hold a permit for the case of need as here very well and stand on the side of the authority that in practice rooms fixed equipment or tripod equipment are completely sufficient. If the results of radiation monitoring are still negative, it would be nice to be able to stop dosimetry.

How many devices like yours are in use worldwide?
Blum: According to Timo Kleinwächter from KaVo, around 40,000 KaVo NOMAD Pro2s were sold worldwide, most of them in the USA. In the United Kingdom about 1,000 units were sold and in the rest of Europe about 200. In Germany, a total of 15 devices on the market, which are probably various devices of the NOMAD family, which used for example for forensic purposes in the police and the Bundeswehr become.