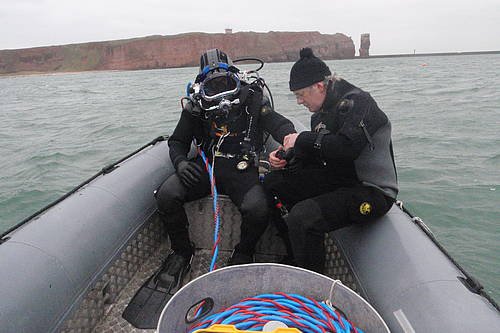 Tube diving is the alternative according to the rules of the professional or according to the guidelines of research diving, if dives become necessary, where the no-stop time may have to be exceeded. The legislator is of the opinion that this method can be used to achieve a particularly high level of security. The air supply comes from the surface, is controlled by additional personnel and also requires the provision of defined air reserves. The risk of the breathing gas supply running out during the decompression breaks is therefore minimal. The diver also has so much gas reserve with him that he can emerge with breathing gas even if the hose breaks.

Recently, more and more divers have been commissioned with scientific objectives on offshore plants (e.g. windmills at sea). It was surprising at first that the customer requested tube diving, although there was usually no compelling reason to do so due to the depths and times to be found. The research diving groups are therefore faced with the decision to comply with the client’s request and to use tube diving equipment (i.e. to to buy, to borrow and above all to practice with it) or not to accept these orders.

Hose dipping devices must comply with DIN 58 642. As a user, you are forced to use equipment that already meets this standard "in traffic" have been brought – it is hardly financially feasible to want to become a manufacturer yourself.

Colleagues from the Biological Institute Helgoland (BAH / AWI) now invited 2 instructors from the research diving center at the University of Rostock to get to know such a facility and maybe even try it out. Ultimately, it should one as Training company know what may need to be discussed or decided on. That is why the Rostockers (Andreas Frahm, IOW and Gerd Niedzwiedz, UniR) gratefully accepted the invitation and set off for Helgoland with their diving junk .

Getting to know and using the Kirby-Morgan mask (KMB 28 band mask) was the focus on the first day. This mask should not be confused with the well-known helmets from the same company. The KMB 28 is a full-face mask, which is, however, one size larger than the full-face masks used by other manufacturers at the FTZ. The KMB 28 is also pulled over the hood of the drysuit and closed at the back with a zipper. This traps a very large volume of air, so this mask must be firmly attached to the head to prevent it from slipping. A very stable rubber head spider with wide straps is used for this.

Unfortunately the design of the windscreen is relatively far in front of the face, so that the field of vision is more restricted than usual. All valves to be operated by the diver (on the regulator to set the breathing resistance, on the right side of the mask for setting the purge air and also on the right side of the mask for switching from hose to emergency air) must now be operated blind. You should already know whether to turn a valve to the left or to the right!

The operation of the other equipment should also be mastered as in sleep. For example, the observability of the gauge of the emergency compressed air bottle is very important: if the corresponding valve is rotated incorrectly, the accidentally breathed from the emergency bottle and not from the tube. Everyone can imagine the consequences of this for themselves.

A silicone mask encloses the mouth and nose. The usual pressure equalization (Valsalva with closed nose) is not possible – but the problem is already known from the old Dräger VM and also from the Interspiro VM available in the FTZ. A plunger is attached below the KMB mask window with which a nose wedge can be moved inside the mask. Happy is the one who can place his nose in the range of movement of this rubber part and can now manage the pressure equalization. Otherwise, only slow immersion and swallowing help.

The combination of the KMB with a wired telephone facility is of course very pleasant, because communication is important for more complicated diving work. The volume is also set on the surface for the diver. The fact that the breathing sounds are continuously audible is advantageous for securing the diver.

In order to avoid tensile forces of the hose on the mask, the diver puts on a so-called harness, in which a strain relief of the hose is crocheted.

In principle, this would describe the equipment.

The dive itself is done in the usual manner with fins and in a balanced state. The increased hydrodynamic resistance of the hose appears to be getting used to, which is particularly unpleasant when there is a flow.

According to the colleagues from the BAH, the system consisting of KMB 28, 80m air hose and communication system costs about 10 TEuro. It should not go unmentioned that, of course, this system also needs regular maintenance that several hundred euros a year must be raised.

Conclusion: A very educational business trip with many eye-opening effects. However, there is still an unanswered question as to where the real advantage of using such a hose immersion system lies, for example, if biological off-water sampling is to be carried out at an offshore wind turbine. We think that using this tube immersion system takes some getting used to and can only descend training desperately before it "sharpen" Recommend use. Of course, the mask should also be tried to see whether there is still enough room to breathe and whether the pressure equalization can be carried out without any problems – tests that are carried out in the "Selbstversuch" have not yet run satisfactorily.

In this context, the question naturally arises as to what alternatives there are to the KMB 28 for tube diving. It is possible that the switchover unit (see Figure 2: Hose / emergency breathing) can also be attached to other full-face masks, perhaps even to those on the FTZ or IOW. In addition to the price attractiveness, the existing experience with these masks would be a huge advantage. And: a wireless phone for the Interspiro or Poseidon VM is already available. We have to have a look there .

In any case, I would like to thank the colleagues in the scientific diving center of the Alfred Wegener Institute Bremerhaven, Biol. Anstalt Helgoland, for the chance to use the facility.

Detailed information about the KMB-28 here:

The company Kirby-Morgan itself offers a mask (M-48 Supermask), which is also suitable for tube diving, is financially much cheaper and can also be equipped with an alternative regulator. that would be really an interesting (re) form of tube-fed research diving.