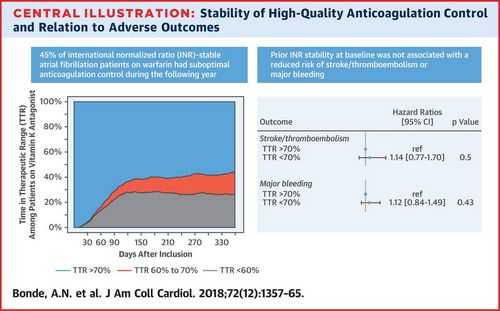 For whom are the new substances suitable?

Atrial fibrillation (AF) is the most common cardiac arrhythmia, especially in old age. The prevalence increases continuously with age and number of comorbidities. Although VHF is an independent disease entity, it is often an expression of another underlying (heart) disease. The first is arterial hypertension, followed by valvular and cardiac insufficiency. The more comorbidities present, the more likely the occurrence of VHF. VHF is responsible for around one fifth of all strokes (Figure 1).

With the oral anticoagulants, Marcumar® and warfarin, highly-effective anti-stroke prophylaxis agents are available for atrial fibrillation (64% risk reduction for stroke occurrence with a number needed to treat of only 37) [1]. However, in the outpatient sector, only around 60% of the patients to whom it is indicated are anticoagulated at all, of which only around 50% are regularly in the therapeutic area [2]. In all adversities in everyday practice (logistics, interaction with drugs, compliance, errors in the information transfer) there is a need for optimization.

For some time, new oral anticoagulants (rivaroxaban, dabigatran and apixaban) have been on the market as alternatives to Marcumar®. According to the manufacturer, the advantages in a fixed dose, once or twice, the absence of (laboratory) controls and a good safety profile similar or better than the Marcumars® / warfarin [5, 6, 7]. With dabigatran (Pradaxa®), a direct thrombin inhibitor, and rivaroxaban (Xarelto®) and apixaban (Eliquis®), both inhibitors of factor Xa, three new medicines are available for the prevention of cardioembolic disease in non-valvular atrial fibrillation.

Recently, the Drug Commission of the German Medical Association (AkdÄ) has issued a statement on the new anticoagulants [6], in which some critical aspects are presented. In the RE-LY study, the patient groups were not blinded when compared to dabigatran / warfarin, which may lead to bias in the results. When recruiting certain groups of patients, for. B. multimorbid patients, patients older than 75 years, excluded, so that the study results can not be transferred to patients in our daily practice.

The quality of the INR attitude in the studies was relatively poor and does not reflect the good care reality in Germany. Rather, subgroup analyzes have shown that in patients with a good INR> 70% in the therapeutic range) the small benefits of the new oral anticoagulants are even abolished. Because of the duration of the study, no conclusions can be drawn on the long-term safety, which is, however, due to the nature of the admission studies.

On the positive side of the new oral anticoagulants it is emphasized that controls of the anticoagulant effect are not necessary. Nevertheless, regular monitoring of renal function during the course and testing for clinical evidence of bleeding is recommended.

If, on the other hand, you know that renal function may be impaired during treatment or aging or as a result of acute intercurrent disease, then this advantage of not using controls in our daily practice is much lower.

However, renal function has a second important aspect for our reality of care. All new oral anticoagulants are being renally eliminated to varying degrees. The short half-life (up to a maximum of 14 hours) is cited as a good argument for the controllability of the drugs. After discontinuation of the tablet, surgery / surgery is possible the next day. However, this time is extended to up to four days in patients with impaired renal function and high risk of bleeding (Table 1)..

Currently there is no antidote available, so that at the moment it is not possible to provide uniform information on how to deal with emergencies or bleeding. Also, the reference to the dialysability is not very effective: Who likes to dialysed z. B. a polytraumatized accident victim?

Last but not least: the costs! With all the sympathy for relieving the logistics of the practice by the omission of regular INR controls, completing the laboratory requirements, ordering patients or telephone contact to set the further dosage, etc. – the therapy is at least 20 times more expensive!

The use of new oral anticoagulants is critical in: