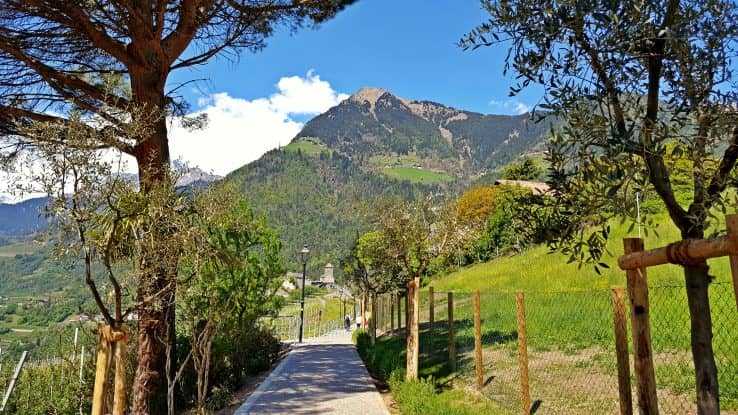 Mountain tour on the magnificent panoramic mountain over Meran

The actual plan for this mountain hike was to hike to the famous Spronser Lakes. You just have to see this beautiful high mountain lake plate live. But unfortunately we were Early May still too early tuned.
“At this time of the year, the lakes are still frozen and over 2,000 meters of altitude is still up to a meter of snow.”, clarified the dear senior boss Christoph Hehl of the Hotel Hofbrunn. (The hotel is a real insider tip!)

And he was right! In his experience, it’s worth it only from mid-July to the Spronser lakes ascend. He recommended the Mutspitze, which lies just before the lakes on the snow-free south side and is a magnificent mountain. Thanks for this wonderful recommendation!

The ascent to the Mutspitze

Let’s go to the parking lot of Hochmuterbahn in Dorf Tirol. Our recommendation is to take the train up to the Muthöfen at 1,400 meters. These first 750 meters can save you, because you still have plenty of opportunity to stretch your legs up. After all, it’s almost 2,300 meters high.

The Ups and downs cost (in May 2016) 10 Euro (with guest card 9 euros), which compared to many other cable cars, for example. in Austria or Bavaria is really super fair. Current price information can be found here: https://www.seilbahn-hochmuth.it/

In the morning, the train goes up every 5 minutes. During the driveway you have a wonderful view of the Burggrafenamt around Meran and far into the Vinschgau. In addition, you drive very close to the Castle of Tyrol and get to see it from a vantage point, which is not possible on the ground. (see photo) 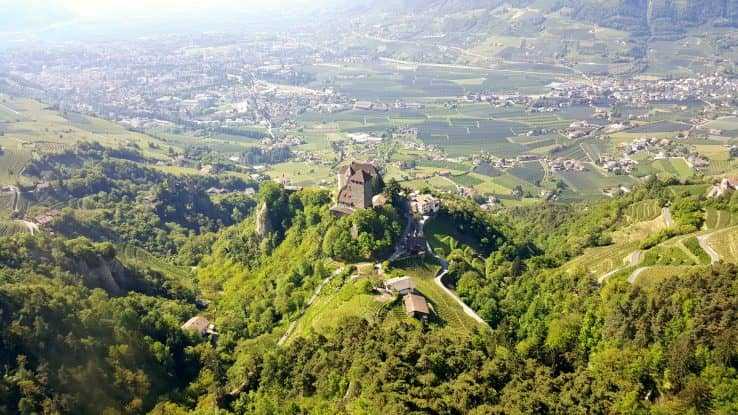 Hochmuterbahn – View of Castle Tyrol during the driveway 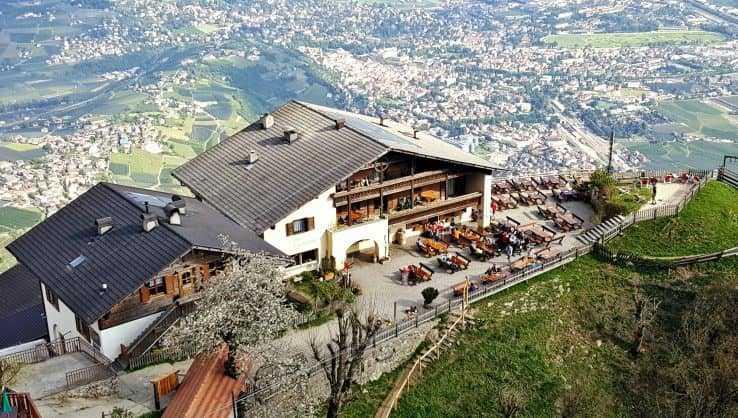 From the mountain station follow the short path uphill above Muthöfe Gasthaus “Steinegg” (many products of own production!).
There make sure that you do not turn left past the Hans-Frieden-Weg direction Leiteralm, but the signs of Route 22 follows. Here you pass the Gasthaus Steinegg nämlicher left hand (ie right past the inn &# 128521; ) and follow the Meraner Höhenweg in the direction of north-east. 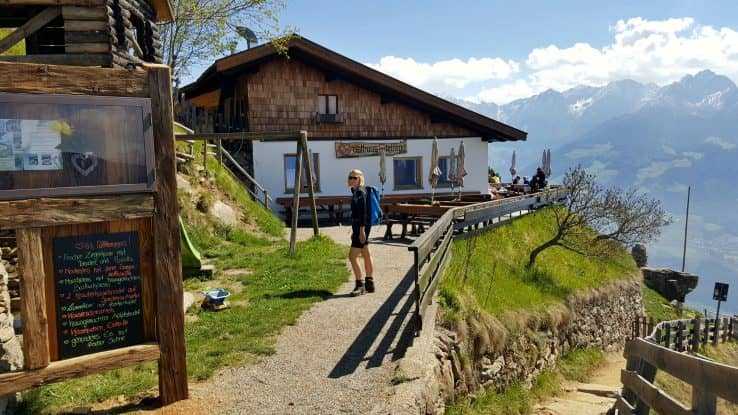 Gasthaus Steinegg on the Meraner Höhenweg above the Muthöfen

After about an hour over mostly shady and not too difficult way one arrives then to Gasthaus Mutkopf at 1,684 meters. 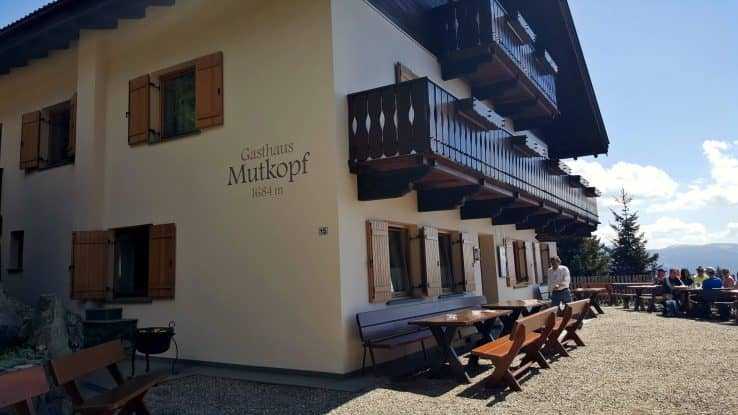 Gasthaus Mutkopf – reached after about one hour

We took a short snack there and shared a Marend plate. (See photo). The Kaminwurzn and the oven-fresh Vinschgerl were legendary. Absolutely try!

The hosts were very nice and have taken care of every guest. And of course, there is a gavel from the terrace again. Local people recognize from there, e.g. the castle Trautmannsdorff, which became known by the fact that Empress Sissi stayed there to cure. Also a very nice destination, if you spend a few days in Merano.

Left of the Gasthaus Mutkopf, behind the small refuge the path (Way 23) continue upwards. The sign says “1h: 50min” to Mutspitze. The innkeeper said “I’m up in oana hours”. After an hour, we are very sure that he must have fooled. &# 128521;

The path is still a few minutes short and partially shady in the forest, but then significantly more than an hour on free and quite steep grass back of the Mutkamms (full sun) to the summit. (see photos) 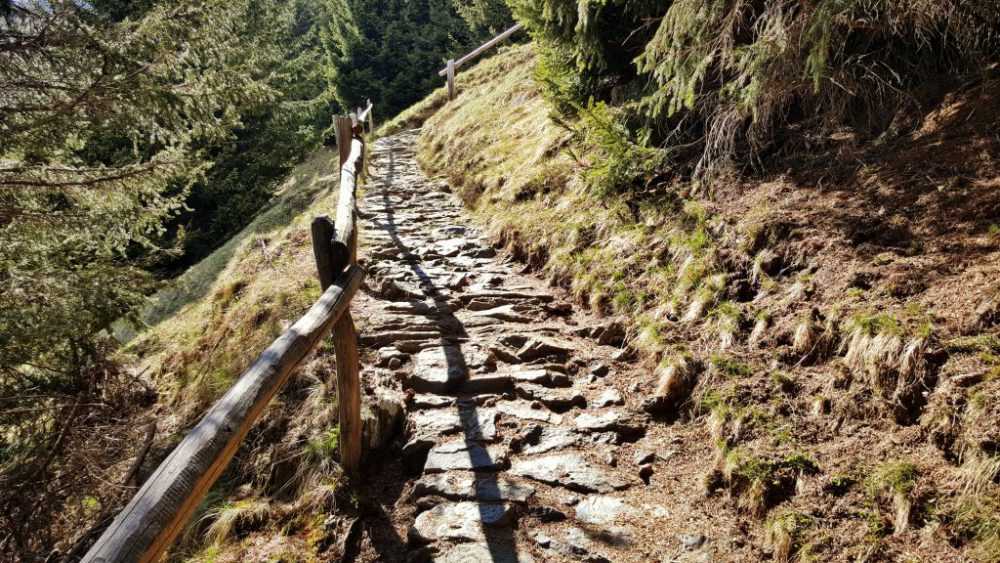 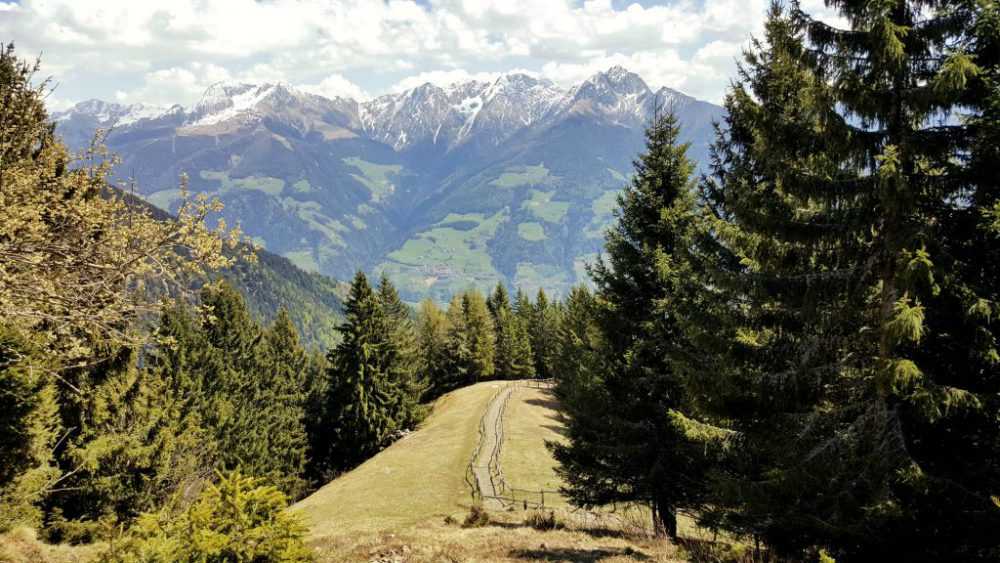 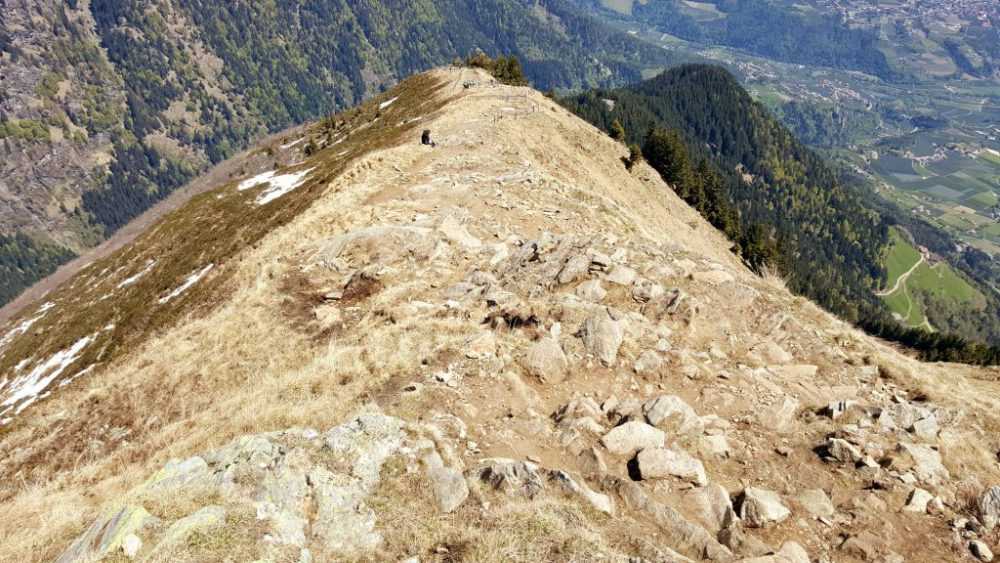 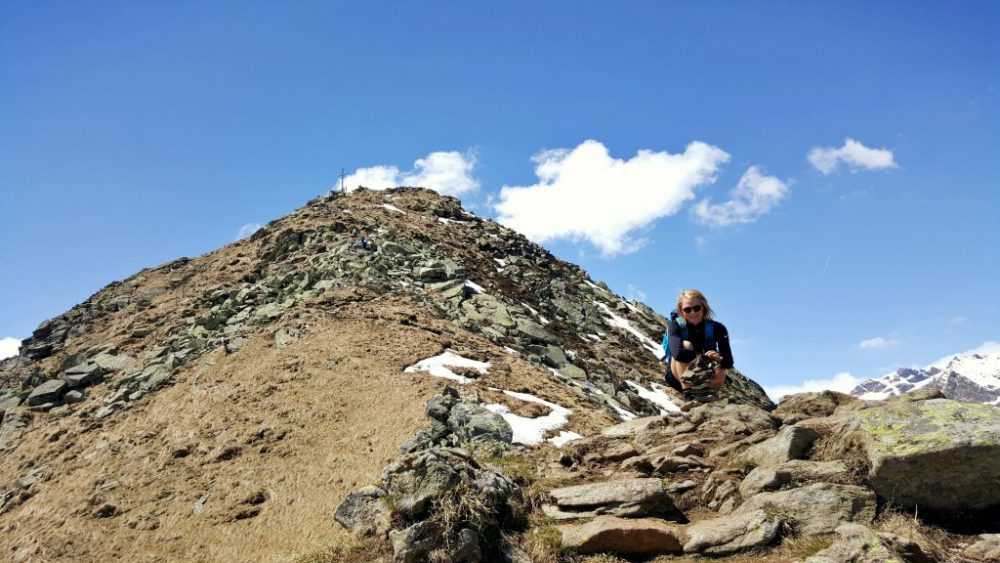 But you do not walk on grass or earth. The whole way is “paved” with small boulders, which makes walking quite exhausting. Well, half of the way is probably flanked with a wooden railing, so you can hold on to the permanent kinking at least. &# 128521; For children and sandals wearers the way is therefore rather inappropriate. The last meters then lead over clunky rocks, but do not require climbing skills. (see photo). 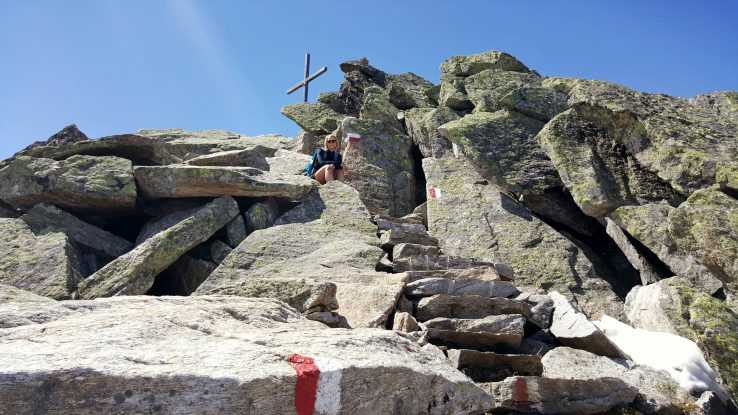 Big rocks in the last meters

After good one hour and 45 minutes we reached the summit cross.

The view from the Mutspitze

Already during the ascent one does not get out of sight. Until Mutkopfhaus you can see nice down to Merano and the surrounding villages. From the Mutkopfhaus accompanies one right hand the chain from Schwalbenseite and Schönleit.

At the summit itself you can see north-east the Ötztal Alps. North-west (direction 2 o’clock) you can the Spronser Lakes guess behind the Rötlspitz. Behind it are actually all the famous peaks of the Texel Group: Tschigat (3,000m), Lodner (3,228m) and Hohe Weiße (3,278m) and their names.

To the south lies a Meran and the Adige Valley to Bolzano at your feet. In the background, in good weather, the Dolomites out. To the right of this (in the Vinschgau) you can see peaks like the Hochwarth (2,608m), Rontscher Berg (2,711m) or the striking Hasenöhrl (3,257m) and even further in the southwest the Zufrittspitze (3,439m) to behind ortler, the highest mountain in South Tyrol at 3,905 meters. 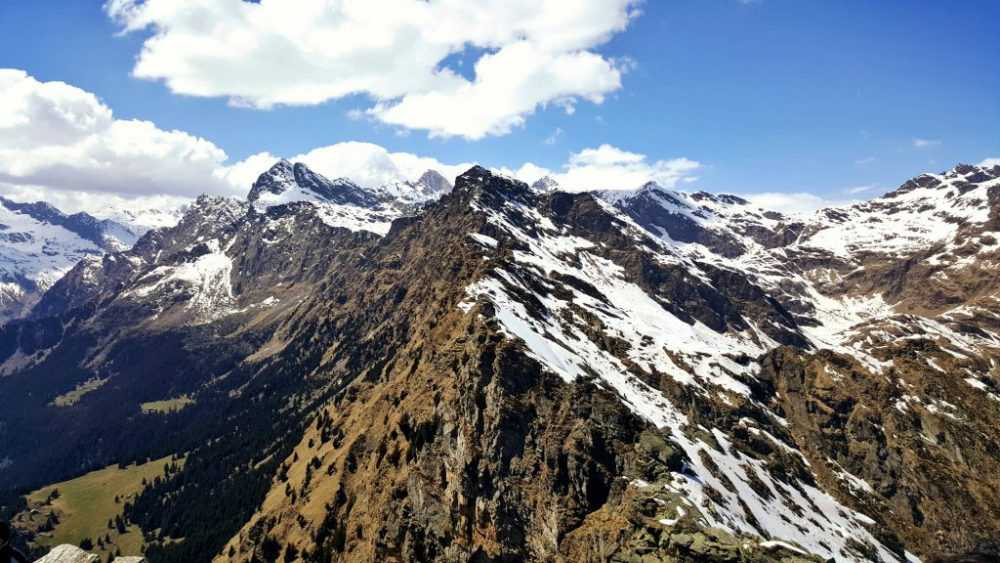 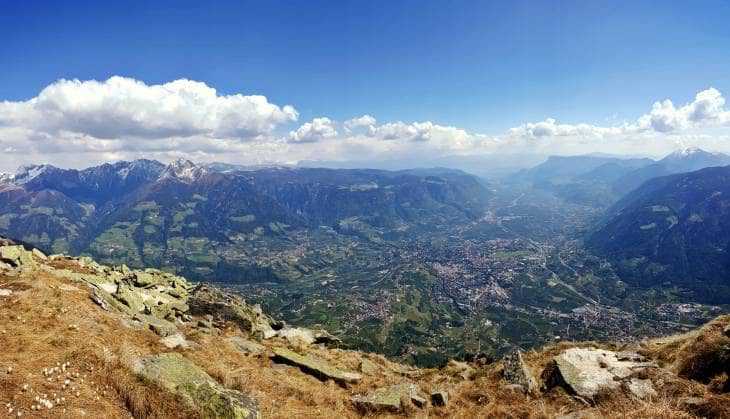 The descent to Dorf Tirol

The descent takes place along the ascent path, which takes almost as long as the ascent to the Mutkopfhaus (due to the described way-condition). From there it is twice as fast as on the way there, because the way there is very easy.

VARIANT (at the earliest in mid-June)

During the descent, mountain hikers and hikers, who are particularly eager to hike, have the opportunity to reach the summit of the Taufenscharte (described here at Bergfex.it), from where they can return via the Leiteralm and the Hans-Frieden-Weg to the starting point at the Hochmuth mountain station. We would have liked to choose this route, but there was just a lot of snow left.

The hike is recommended from the beginning of May. Even then you cross a few small snow fields from 2,000 meters.

All in all, it’s a beautiful day trip that requires a bit of surefootedness and mediocre condition. There will hardly be such a beautiful mountain in the region. That’s why the locals visit him so much. Nevertheless, the summit is not overcrowded and you can look for a nice place to enjoy the view and mountain air in peace.

Do you need new walking shoes by chance? Then maybe our hiking shoe buying advice will help you!