So that the kids are busy and the Children’s birthday is as entertaining as possible, one or the other game should not be missing. You don’t always have the opportunity to celebrate your birthday outdoors or have enough space to romp around in the house. But celebrations and games are also good in a limited space. Below we show you ten fun and popular children’s birthday games that can easily be played indoors in the apartment. 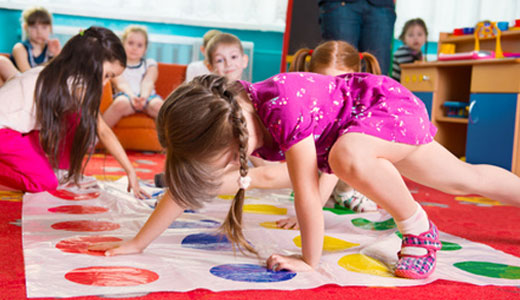 Murder in the dark

For this children’s birthday game, a piece of paper and music is required for each child. "Murder" is on one piece of paper, "detective" is on another and the word "dancer" is on the other pieces of paper. Now all the children draw a note and they can read what role they have. Nobody is allowed to reveal his role to another child. The apartment or room is now darkened somewhat inside and the detective leaves the room. The music plays and the other players dance. The killer dances close to another player and he gently pinches the other player. The pinched cries out loud and he falls to the ground.

The detective rushes into the room and he sees the child lying on the floor. He now begins his questioning of the people who are at the crime scene, what they have to do at the crime scene. Each dancer tells him his alibi and then a second interview begins. Every child tells the same story again. However, the murderer is now telling a different version and the detective needs to recognize who the murderer was. Now the "murder" has been solved and a new round of the game can begin with newly assigned roles.

For this game a chair or pillow and a keychain are required per child. The children form a circle with the chairs or pillows and a child now stands in the middle. It is the key king who holds a keychain in his hand. The key king goes to a child, whom he greets with “Hello”. Then the next player goes to the other children and greets them too. This continues until all the little guests of the birthday party are in a circle on the way and no one is sitting. The key king then drops his keychain and each of the little party guests now sits down on any chair at lightning speed. The child who stands last is the new key king.

Ringlein, Ringlein … you have to hike

A ring (finger ring, key ring or similar) is required for this children’s birthday game. The other players stand or sit in a circle and hold their closed hands in front of them. A child receives the ring, which he holds in the closed hands. Now he goes from one guest of the birthday to the other and puts his closed hands over the child’s hands. He secretly lets the ring fall into the hands of any child. During the game, all the children sing the verse “Ringlein, Ringlein… you have to hike from one place to another. Oh, how beautiful, how beautiful, please don’t let the ring see. ”The child who passed the ring on to the child asks some child where the ring is now. If it guesses, it is your turn and now let the ring wander. If it guesses wrong, it is your turn to whom the ring went to.

Only music is required for this game. All guests of the children’s birthday dance through the apartment to the music. The game master plays the music and when it is stopped, all dancers stand petrified like a statue. When the music continues, the dance continues. To make the game harder, those who are still shaking after stopping the music, i.e. who are not completely petrified, have to leave.

This game for children’s birthday is a lively and fun circle game that requires quick reactions. Chairs are needed for this. The number is one less than the other players.
All children sit in the circle of chairs and one child stands in the middle of the circle. This goes to the teammate and asks “Do you like your place?”. There are 3 ways to answer this game: Either not at all and all players now switch places.

At the children’s birthday game "Flüsterpost", the classic for indoors, all children sit in a circle. The game master thinks of a simple word that he whispers in the child’s ear next to him. Then he whispers the word he has heard into the neighbor’s ear. What is heard is said more and more. The last child in the group now utter the word that it understood. Now the game master can check if it is the right word he said initially or he says the right word. If the children’s birthday game succeeds with simple words, difficult words or even sentences can be sent.

For this game a paper cup and small delicacies in the double version are required. The game master turns the paper cup with the sweets upside down on the table without the children’s birthday guests being able to watch. The same sweets are under two paper cups. These paper cups should not stand side by side. Now the teammates are brought and they allowed to Always lift two cups in turn and look underneath. If a child finds a pair of sweets, they can eat the sweets.

Balloons and music are needed for this birthday game, which can be played wonderfully both outside and inside the apartment. The children now go together as couples, with each couple receiving an inflated balloon. The couple face each other and try to hold the balloon with their foreheads. Your hands are on your back. The game master now lets the music run and the couples dance to it. In the meantime, the balloon must not fall on the floor. If this does happen, the couple will be eliminated. The couple who are the last to carry the balloon between them have won.

The mummy and the pharaoh

This fun game requires multiple rolls of toilet paper. The children are selected in pairs and each pair consists of mummy and pharaoh. From the start signal of the game leader, the pharaoh wraps the mummy as quickly as possible from bottom to top in the toilet paper without a gap (except for mouth and nose for breathing). Whoever is the quickest to wrap has won the game. All children are then photographed as a funny memory so that they can enjoy this great game later.

Two children take part in this fun children’s birthday game. One of them has the job of not laughing for the next few minutes. The child should just look indifferent and with a serious face. The active child now tries to make the opponent laugh with funny facial features or comments. Tickling or other touches are not allowed. All other party guests who are not currently participating will also have a great time as spectators. This is a game for children’s birthday that always ensures a good mood and a lot of fun.

10 fun games for kids birthday that are outside in the garden or can be played in the park. Read more →