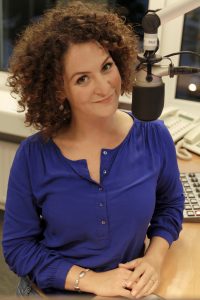 Workplace: Hanover and the Holzminden-Höxter region

Growing up in the heart of Holzminden:

Melike is a veteran of Holzminden. Instead of going to kindergarten, she spent most of her time in her parents’ tailoring shop right in the city center. Her parents’ house was in Karlstrasse, so it’s no wonder that she still lives in the heart of the city today: "I love living here in the city center, it’s just my home," says the 32-year-old.

In her school days it quickly became clear: Talking and writing are Melike’s thing. Her strengths were clearly in the languages ​​and she was very curious about it, so it is not surprising that she works as a freelance journalist and radio host today. However, it did not take this route directly. After graduating from high school at Campe-Gymnasium years In 2005, the 32-year-old initially completed an apprenticeship as an industrial clerk at Symrise.

"The training there was great, but actually I always wanted to be on the radio," said the young woman. After various internships, including at the Göttingen city radio and the daily newspaper Holzminden, she was surprisingly drawn to Bavaria. “At that time I applied for training as a radio host all over Germany and it became Ansbach in beautiful Middle Franconia,” she explains. For six years Ansbach became her adopted home: "I learned a lot, also about myself, I got to know great people with whom I still have contact today." Of course, she still goes to Ansbach from time to time, to visit friends and work colleagues.

The radio presenter has been back in Holzminden, in the heart of the city, where she would like to stay for around two years. First she worked at Radio Hochstift in Paderborn and then moved to Radio ffn in Hanover. In addition, Melike works as a freelance journalist in sound, text and images, primarily in the Holzminden and Höxter area, including at Weser-Ith-News, but also for companies and magazines. Finding stories, researching, conducting interviews – that’s what she loves best. The journalist interviewed in her own series of articles "For a coffee with …" known Personalities and interesting actors from our area. Click here for Melike’s series of articles "On a coffee with …": http://www.holzminden-news.de/auf-einen-kaffee-mit

The wild Hasselbach, which flows from the Solling to Holzminden, the sky ladder at Boffzen and everything that is around the Weser. The 32-year-old mentions the new Weserkai, the harbor bar and the long walk behind the gravel works. “Because you can just pause there and see how beautiful we are here Life“, She summarizes. To underline this, she lists bars and restaurants. Because she loves to talk to people, preferably with a white wine. You can feel how much Melike likes to live here and that, as she also emphasizes, she has no regrets to have come back here.

The 32-year-old also finds peace and relaxation in reading. There is no prominent genre, everything from historical to modern is included. Since reading can make you hungry at some point, cooking as a hobby is almost a logical connection. "Something between Italian and Turkish", Melike locates her cooking style. And it tastes great! Thanks to the great recipe for their eggplant stew, we were able to convince ourselves of it.