Information about the stork train

In August, restlessness spreads among the storks: The young storks make more and more trips into the surroundings of the nest and soon disappear. Short time later, parents and squabs went independently of each other on the long way to Africa. 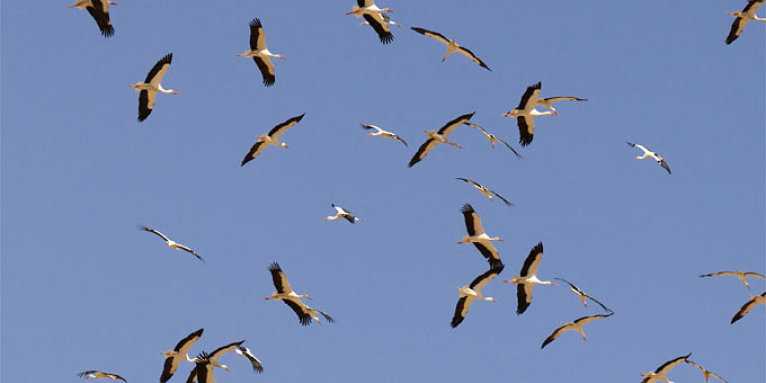 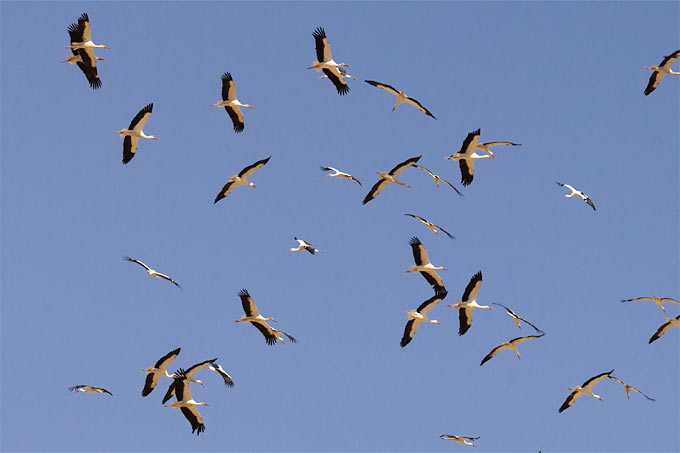 The stork migration developed over many millennia as a behavioural adaptation to the seasonally changing climatic conditions in Europe and Africa. It is not so much the cold as the winter food shortage that requires the long migration to Africa.

The enormous distances that storks cover on their way to Africa and back to Europe could never be covered by active and exhausting rowing. Similar to gliders, they therefore use warm updrafts, which allow them to fly with energy-saving gliders. Such thermals form in sufficient strength only over larger areas of land. They occur when the sun warms the ground and gives off the heat to the air near the ground.

Sailing in the updraftThis creates a light updraft which the storks use to screw up into the air to save energy. Then they glide to the foot of the next thermal, where they can again be carried to great heights. Since this important buoyancy cannot occur over large areas of water, the storks follow a route on their flight to Africa that runs largely over land. The Bosphorus between Europe and Asia is therefore a bottleneck for the so-called East Pullers. The West Pullers use the narrow Mediterranean strait near Gibraltar.

Storks are true frequent flyers on their long-haul flights: in the two to four train months they cover an average of 150 to 300 kilometres per day. 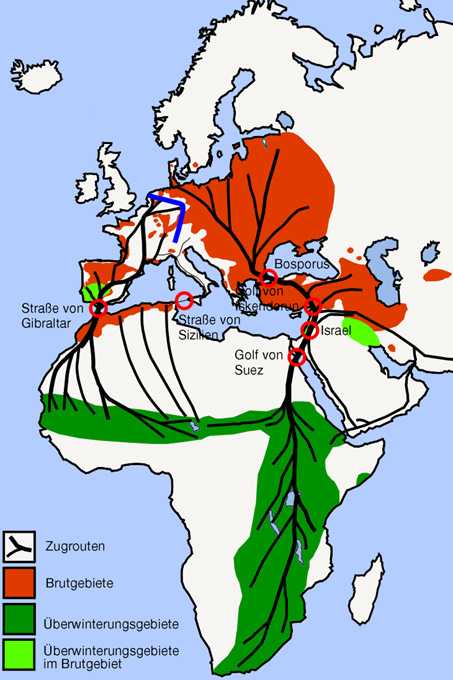 The migratory routes of the white storks

Almost 75 percent of the German white storks choose the eastern route for their train to the wintering areas, which leads them via the Bosporus in Turkey to the Middle East, first to Sudan and then on to Tanzania and even South Africa. They often cover distances of more than 10,000 kilometres. Every year about 500,000 storks follow this route from the Bosporus via Central Anatolia to Iskenderun on the Mediterranean coast.

Turkey was and still is an important resting place for the migrating storks. Although important wetlands were drained in the seventies, the storks still find good resting and feeding places to gather strength for the further stages. In addition, Turkey is one of the countries in which the stork, as a “Mecca pilgrim”, enjoys the traditional protection of the mostly Islamic population.

The transit through Israel, Palestine and Jordan is probably the best explored stage of the train route. The storks migrate along the Jordan in large troops and sometimes pose a threat to air traffic: Even today, there are still collisions between aircraft and storks. After crossing the Sinai peninsula, the storks fly over the Gulf of Suez and then follow the course of the Nile to the Sudanese border.

Westzieher more and more rarely in AfricaThe storks of southwest Germany take the western Zugroute over Gibraltar and the Sahara together with its Artgenossen from France, Spain and Switzerland in order to spend the winter in the west-African Sahelzone between Senegal and Chad. In the last few years, however, more and more storks have become used to moving on. They stay in southern Spain, where they also find sufficient food on rubbish tips during the winter months.

The observation of their migratory routes and movements documents the exact migratory behaviour of the birds. In this way, sources of danger along migratory routes can be identified and concrete protective measures can be promoted and demanded across national borders. As long-distance haulers, storks are exposed to an abundance of civilization-related hazards such as electric overhead lines, intensive hunting, poisoning, and the increasing loss of suitable resting areas. If the causes of hazards become immediately visible, a lot of positive things can sometimes be achieved on site with small means – not only for the stork, but also for many other migratory species.

Albertus Magnus (1193-1280) still believed that the storks would spend the winter sleeping in the water. One thing had long been clear: storks simply avoid our winter cold and move away. But where to? A German countess caused a sensation by marking a stork with a silver medallion. This stork was captured in 1846 in Palestine and could be identified by the jewellery.

The mystery was finally solved when the Danish teacher Mortensen began the systematic rituals at the end of the 19th century. 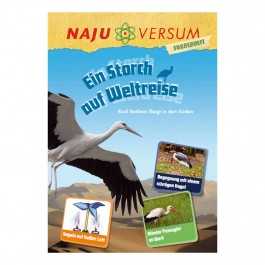 NAJUversum: A stork on a world tour

Accompany the stork on his adventurous journey to Africa. Discover the world from above. Learn more about the stork and the many countries it sails across. Together you will get fat through [. ] more → 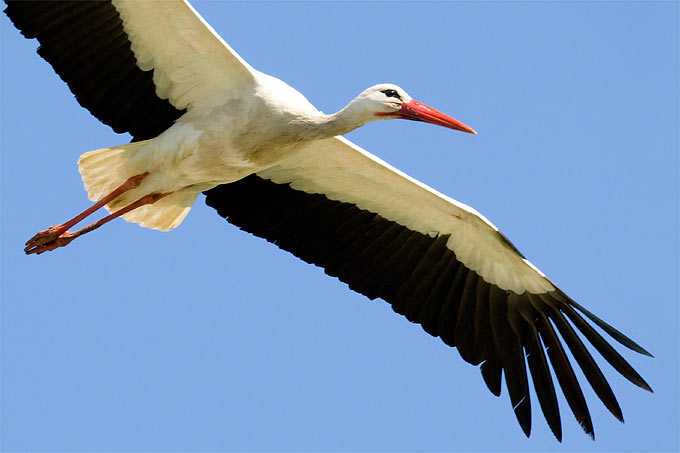 NABU has equipped white storks with satellite transmitters. This enables them to follow their journey to the south live. A map shows where the birds are and in the diary NABU stork expert Kai Thomsen reports on the events on the train. more → 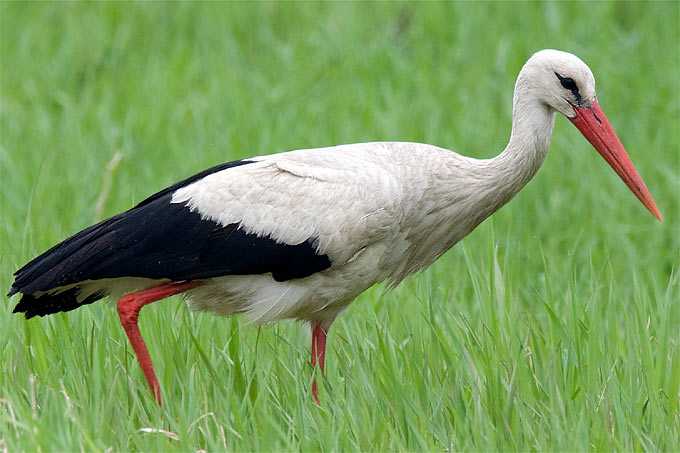 A large part of the time we spend on public relations is spent answering questions from interested nature lovers. Some answers can be found here! more → 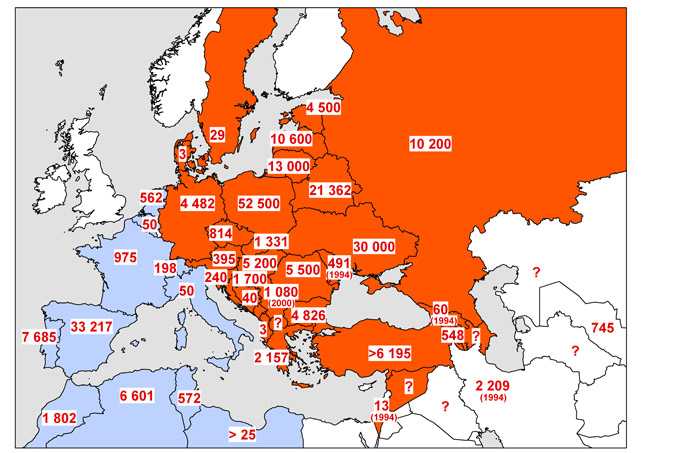 The International White Stork Census was a priority project in 2004/2005 and 2013/2014. The results of the census are of great importance and enable the elaboration of an effective international strategy for white stork protection. more →