For the second week in a row, Apple has featured the new educational app for children “The Human Body”, which is available for the iPad and iPhone at a price of € 2.69. We took a close look at the app and dare to compare it with the previous top dog in this sector: This is my body – another kids app on the subject.

Many of you will already know or have bought the app "This is my body – anatomy for children", after all this app has been put into the spotlight by Apple with an above average frequency. Basically, the comparison can be shortened in advance to the following distinction: This is my body offers many language instructions that your children take by the hand when discovering the body. 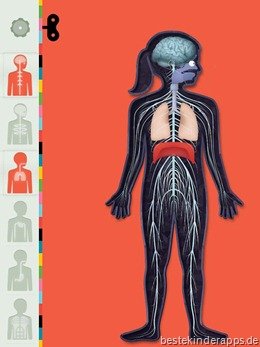 A Narrator and explanations are missing in “The Human Body”, on the other hand, completely and so it’s not just small children who stand in front of the mountain like the ox. However, the app quickly arouses children’s interest. Once the app concept is understood, the children quickly slip into the role of explorers and biologists. And their curiosity is actually always rewarded because they are really waiting worth seeing insights into the human body on the app users of all ages.

The body is divided into different areas or cycles. So you can with that X-ray vision just look at the digestive system or just breathing. Since we can hardly represent all facets of this app, let’s take a look at breathing as an example. 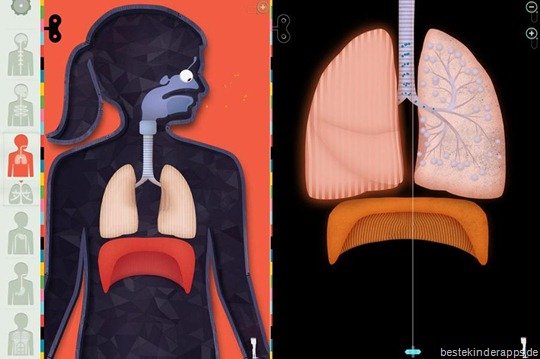 The lungs and the dwarf skin can be zoomed in freely at first. By the way, all areas of the app have realistic sounds and fascinating animations. The lungs can be viewed in even greater detail in a single view. Anyone who then fades in and studies the bloodstream will get a greater understanding of the human body even without linguistic explanations. 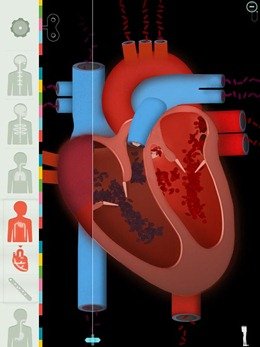 An inconspicuous pair of legs can be found in one of the lower corners. If the children press on this in succession at a faster pace, they can get the subject’s body to run. In this way, the effect of physical activity on the blood circulation and breathing can be realistically observed. Really interesting!

The app “The human body” is particularly suitable for joint discovery with the parents, because many questions will arise very quickly. Depending on the age of the children, help with navigation within the app may be necessary, or someone who moderates the sighting and keeps an overview. The app definitely does not fulfill this task. If you like this point important is, we recommend “my body”.

We see a huge potential for the app in education. The app is almost predestined for Teachers in class to be used, provided the necessary technical requirements have been created. With us, the app is in any case in our new category "Apps for school and teachers“Prescribe (in preparation).

Perhaps to compensate for the missing explanations and linguistic information, the app has been given a question-answer feature.

You can find it here official app trailer, which, however, presents preschoolers as a target group.

The app store has good and bad reviews for the new body app. We are not surprised by the disappointed reviews. Since Apple usually puts the apps in the spotlight with “Our tip” without comment, users can only guess who the tip is aimed at.

We only recommend the app for children from elementary school age who have already shown an interest in physical phenomena. For preschool, however, we would rather say "This is my body guess". In our opinion, the two apps complement each other wonderfully. Start with “This is my body” and deepen it with “The human body”. 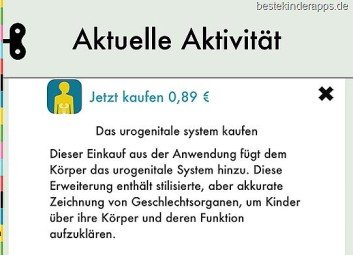 Recently, an extension via in-app purchase has been offered in the parents’ area. The urogenital system was probably too delicate for the developers to start the app. We haven’t tested this in-app extension, but it appears to contain "stylized but accurate drawings of genital organs to educate children about their bodies and functions".

In view of the very different reviews in the App Store, we suspect that opinions about this app are due to the new extension even more will diverge, both in terms of content and in terms of price policy.

In any case, we are not happy about subsequent in-app purchases in purchase apps – other developers also consider adding small extensions to their apps free of charge. We are excited to see whether the content will continue to be paid for in the future.