Improving the compatibility of service and family – this is the aim of the Federal Defense Minister. Now Ursula von der Leyen (CDU) has with the "Campus chick" the Bundeswehr’s first daycare center opens. However, there can be no question of a daycare offensive. 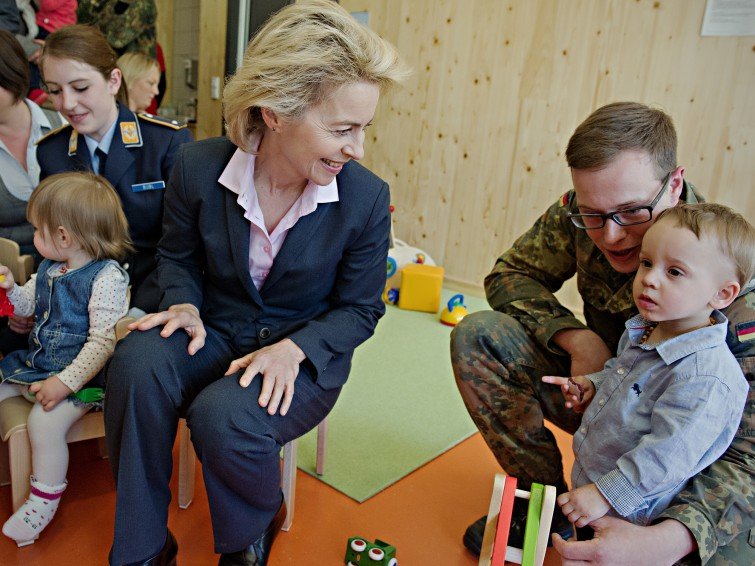 Ursula von der Leyen this morning on the campus of the Bundeswehr University in Neubiberg. The Federal Defense Minister, herself a mother of seven children, reveals a sign that says "Campus Chick".

"It sends out the signal that we welcome men and women who are ready to take responsibility for their lives, but also for the lives of others. For example, the lives of their children who they want to accompany."

This is not easy for students. Bundeswehr students in Hamburg and Munich have also suffered so far. While there will still be no crèche at the Bundeswehr University in Hamburg, the Bundeswehr has now created 36 daycare places at Munich University. Finally, student and soldier Janina Klima says:

"I know that when I decided on the Bundeswehr at the time, that was a big point: How do I do this if I want to start a family and have family planning at some point? And I think that’s a big step in the right direction."

"Of course, that also relieves the burden. If you’re just fresh into college come and have your hands full, then it’s best if you can drop the kids off right there, I say. In quotes."

"It is very practical because our schedule is not full of time, i.e. from morning to evening. But that there is always time in between, during the day. So that you can get your child. This is a huge advantage over crèches that are abroad. Where to get the child from In the morning until evening."

At the official inauguration today on the university campus, the Federal Minister of Defense stood in the flash of lightning. However, Michael Brauns, the spokesman for the Bundeswehr University, points out:

"This crèche was planned many years ago. The initiator was and is our President Professor Niehuss. She had tackled this eight years ago when she took office here."

Requirement for daycare places at least twice as high

"I am the university’s equal opportunities representative. And I was part of the committee that even helped open the daycare. For example, we selected the porter, the Johanniter. I currently also have a child in kindergarten. That’s why I got involved in getting a crèche too. Now we are really proud."

Heidi Jören already suspects that the need for daycare places at the Bundeswehr University is at least twice as high as the previous offer. Of the 3000 students, around 300 are parents of small children. More than at other universities. Therefore the space of the "Campus Chick"-Crib to be expanded quickly:

There is one main reason why the Bundeswehr is spending almost 23 million euros this year to make the Bundeswehr more family-friendly: the troops urgently need personnel. Due to the elimination of conscription, fewer and fewer young people are interested in life in the barracks. A good balance between family and work is an important location advantage, says non-commissioned officer and mother Julia Denner:

"The good thing about the Bundeswehr is that you can stay at home for three years and have no major disadvantages. I was reinstated close to the site, i.e. in Munich. And I was lucky enough to get a place here for my child. And was also transferred to the university so that I can do my child service."

However, the Bundeswehr is not planning a large, nationwide offensive for crèches. In the next few months there will still be daycare openings in two Bundeswehr hospitals. Then it’s over again.