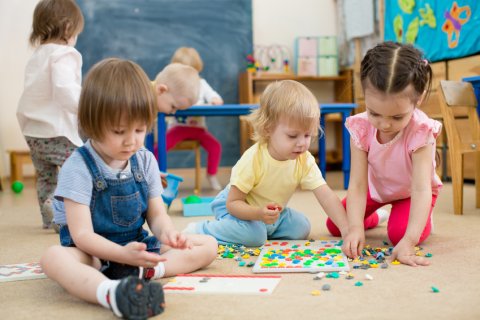 Since August 1, 2013, all children from the age of 1 to 3 have a legal right to a childcare place. With this in mind, the federal and state governments had already agreed in 2007 to provide childcare in daycare centers and daycare for children of up to 35% of children under the age of three by 2013.

Hessen has clearly exceeded this target rate. As of August 1, 2013, childcare places were available for 36.3% of children under the age of three. The expansion is progressing rapidly.

Since 2007, the State of Hesse has been funding the operating costs of the U3 facilities on the basis of the children looked after with considerable funds. After the entry into force of the Hessian Child Promotion Act (HessKiföG) on January 1, 2014, the state funding of operating costs takes place in accordance with the Hessian Child and Youth Welfare Code (HKJGB, there § 32)

In addition, the federal government and the state of Hesse have provided investment funds for the U3 expansion:

Both the creation of new as well as the maintenance of endangered childcare offers for children up to the start of school are promoted. However, there is no legal claim to the funding. The necessary investments for

For measures starting from 1. January 2018 may also due to the Supplementary Directive. a. Measures for children with disabilities, the acquisition of construction vehicles or similar for day care centers for the forest as well as the conversion or expansion of an outdoor area belonging to the day care center are also promoted.

Funding is provided by means of maximum share funding with no more than 90% of the eligible costs per measure. The exact funding requirements are set out in the supplementary guideline dated February 11, 2019 (State Gazette of the State of Hesse No. 10 dated March 4, 2019, p. 226) and in the explanations for the investment programs, which are set out on the website of the Kassel regional council.

1. for projects with which new childcare options are created for children up to the start of school in daycare facilities or childcare services that are endangered in the existing structure:

2. Day care workers and employers of permanent day care workers submit their applications for funding to the local public youth welfare agency.
The regional council in Kassel approves the donations to the youth welfare offices, which they then pass on to the respective applicants.