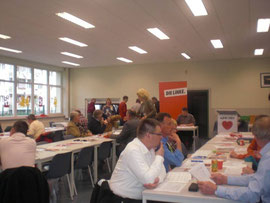 The auditorium hall in primary school Stassfurt Nord was well filled on Saturday morning. The spokesman for the local association DIE LINKE. Staßfurt, Siegfried Mahlfeld, welcomed the voting members of his party and also numerous non-party candidates to the 2014 local elections. In particular, three of the party’s nine members, who also became list candidates, were greeted by the assembly. But first the meeting was constituted under the direction of Klaus Magenheimer. Rules of procedure and electoral regulations, as well as the determination of the committees, proceeded rapidly. In the speech by the spokesman Siegfried Mahlfelds, there were many words of praise for the work of the current city council group and the LEFTEN council representatives. The councils’ commitment to maintaining the Staßfurt hospital, the clear positioning against the The construction of the planned biogas plant, the close cooperation with the city seniors’ advisory council, the group’s solidarity fund for securing social and cultural projects, the commitment to World Peace Day, the political table, the old town festival and the Salzland festival were all mentioned. And last but not least, the group’s clear commitment to preserving the municipal Daycare and schools named Mahlfeld as LEFT topics. Mahlfeld appealed to the new candidates to continue on this committed and clear path.

The accountability report of the parliamentary group leader, Klaus Magenheimer, showed that the parliamentary group does material work and is disputable. The faction work was not accompanied by any public scandals. The opinion formation was fair in heated discussions. The focus of the parliamentary group was on rescuing the municipal housing association from the sale, dealing more intensively with the topics of economic promotion, steady social policy to secure child and youth work and the offers in the area of ​​culture and sport. This was not always easy, according to Magenheimer, since the federal and state governments are always imposing new savings constraints. But here, too, DIE LINKE has clearly registered a protest.

Ralf-P. Schmidt introduced the election program. "We with a heart for Staßfurt" is the slogan of the Staßfurt LINKEN 2014. It quickly became clear that this means committed policy for the fellow campaigners, which of course also includes expertise and competence. And the goal was formulated very self-confidently to want to move into the city council of Staßfurt as the strongest force. The electoral program clearly formulates a policy offer to voters to participate. More citizen participation, more participation by parents’ boards and more rights for local councils are the maxims of action of the LINKEN in Staßfurt. It is about a policy for those living here. This affects day care, school, playground, benches, library, swimming pool, zoo, theater and workplaces alike. According to Schmidt, the ideas of the CDU / SPD council groups to end a municipal kindergarten offer or the SPD idea – reduction of the subsidy for the youth club "Glass House" – are the wrong signals. This is how Schmidt insures: DIE LINKE is a guarantee for cultural, social and sports offers in Staßfurt, a well-considered decision-making on the subject of citizen burden and a motor for more citizen participation and the further progress towards inclusion and equal rights.

The list of candidates was quick. Each applicant used their introduction time and the list could be determined in an orderly manner. As a result, Ralf-P. Schmidt topped the open list of the LEFT with 23 candidates for the City Council of Staßfurt. He is pleased that well-established politicians, but also new faces that present seniors, young people and club life are represented.

City Council of the City of Staßfurt