Discussion about the location for the new kindergarten (Hag playground or not?)

At the end of last year – partly due to the demonstration of many Mühltaler – the playground on the Hag as a location for the new kindergarten was excluded from the municipal council. Instead, they chose the Pfaffenberg.

Now that a soil survey has shown increased levels of nickel and chromium on the Pfaffenberg, the location would be associated with higher building costs than originally planned. The question is also asked whether the public will accept this space as a location even if it has been properly renovated. Therefore, the Hag playground is now under discussion again, along with four other new options:

More information can be found in the new Council and Citizen Information System under the information for the next meeting of the Building Committee on February 9th, 2017, 7:30 p.m. The construction of three Ober-Ramstadt wind turbines within sight of the community of Mühltal ("Windpark Silberberg") will also be discussed there.

Impressions of the DEMO for a family-friendly Mühltal

On December 17th, 2016 the DEMO for a family-friendly Mühltal took place in Nieder-Ramstadt. Numerous parents, children and other citizens of Mühltal moved together from the playground in the Hag to the Mühltal town hall in order to indicate a necessary turnaround in Mühltal family policy. Topics were in particular the development of the HAG playground planned by the municipality as well as the extreme increases in fees for childcare in the room. Community representatives from various parties also took part in the successful campaign. Here are some impressions:

The television was there too. At http://hessenschau.de/tv-sendung/video-26090.html you can watch the two and a half minute contribution »Parents in Mühltal demand better kindergartens«.

Report in the Darmstadt Echo

The Darmstadt Echo also reported in its online edition on December 19, 2016 about the DEMO in Mühltal. The full article can be found at http://www.echo-online.de/lokales/darmstadt-dieburg/muehltal/index.htm be seen.

DEMO for a family-friendly Mühltal 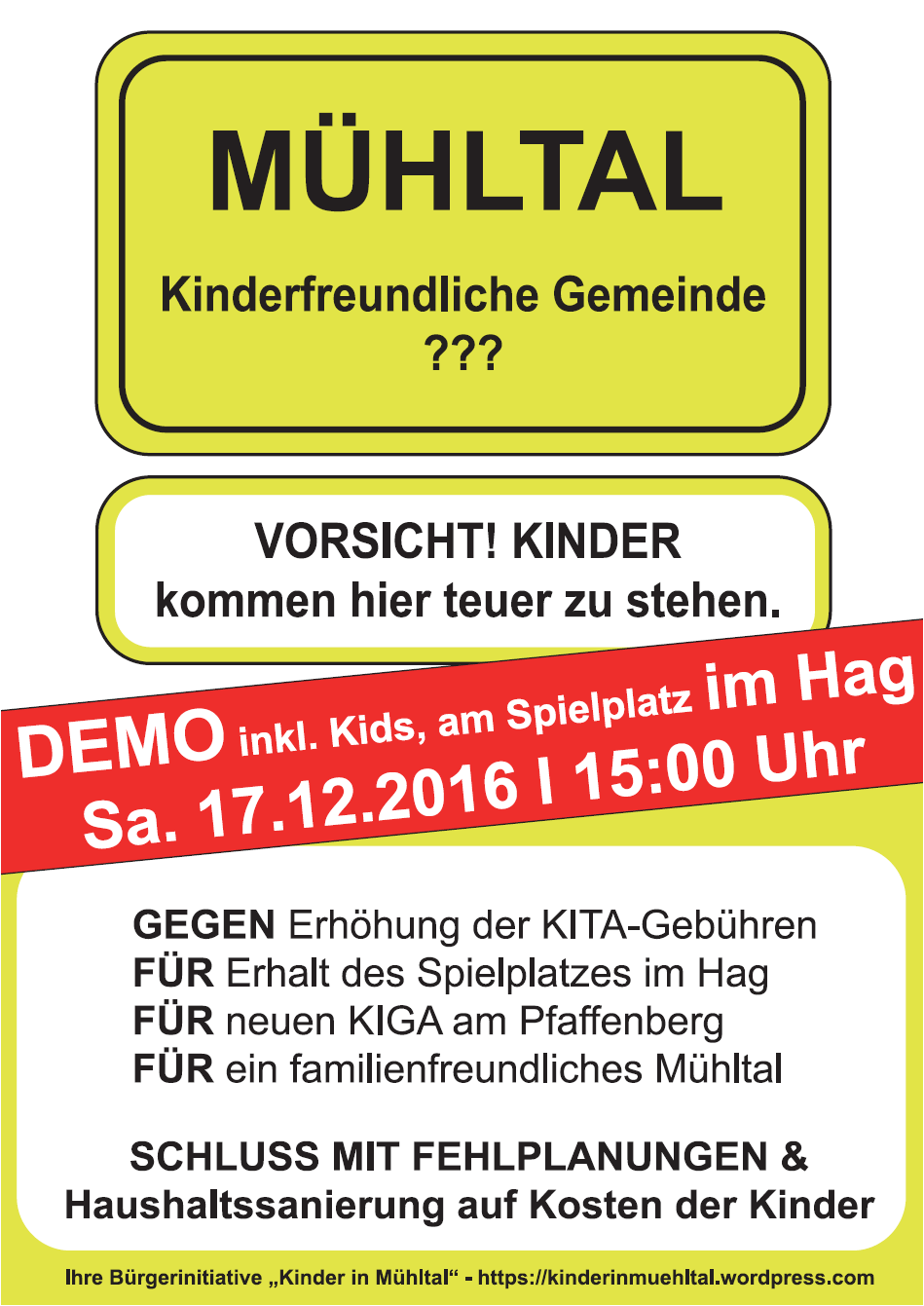 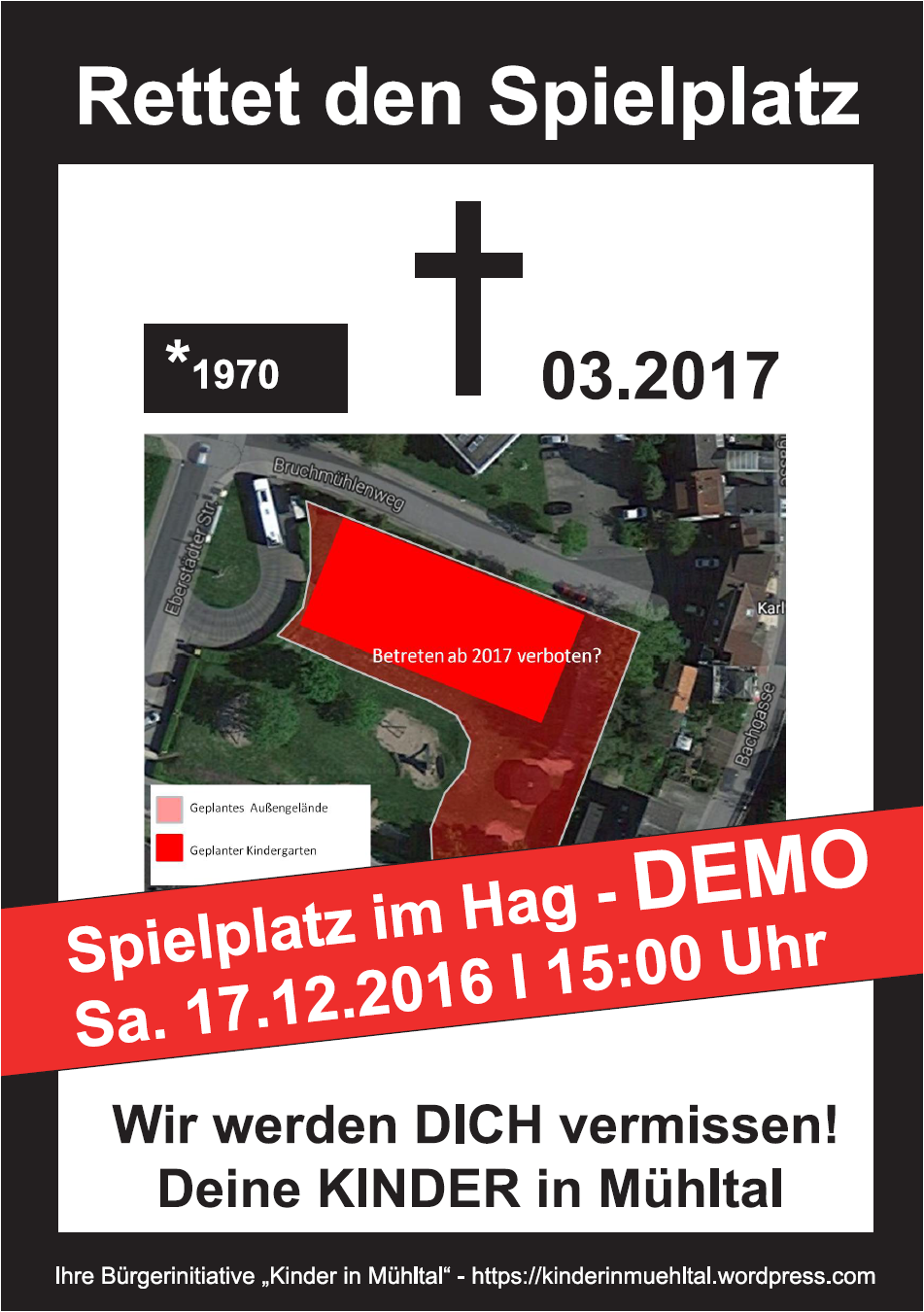 New kindergarten is to be built on the “Hag playground”

The originally next to the gym on Pfaffenberg for three years Planned transition kindergarten should now be replaced by a long-term solution in wooden modular construction. This is a very gratifying development for the children. However, according to current planning, the building is to be erected on the football field of the “Am Hag” playground. Large areas of the playground are planned as outdoor areas for the kindergarten. This would make only a very small area accessible to the public, which is neither suitable for large children to play football nor for small children. We as parents hold this solution for very unfortunate because it eliminates the only playground in Nieder-Ramstadt that is suitable for different age groups. In the sense of a comprehensive family policy, this cannot be the goal of the Mühltal community.

The dates of the public meetings at which the topic will be discussed in the coming days can be found here:

Next Tuesday, the municipal council will vote on the establishment of a makeshift kindergarten. We look forward to great interest! More information is available here: