The Olydorfspatzen student daycare center is located in the Olympic Village. The Olympic Village was built in 1972 for the Olympiad built in Munich. At that time the athletes lived in the bungalows. Today mainly students live there. The Olympic Park is in the immediate vicinity and can be easily reached on foot. In the complex of the Olympic Village there is a shopping street with bakeries, supermarket, doctors, pharmacies, a post office and restaurants. There is an atmosphere reminiscent of a village. There is a good infrastructure and the surroundings are idyllic due to the Olympic Park. The U3 line (Olympiazentrum stop) is one of the central Munich underground lines. The LMU can be reached with the U3 in just a few minutes. There are also good transport links to the other Munich universities and universities. The predominant catchment area is the north of Munich, all other parts of the city and families who live in the Olympic Village and thus in the immediate vicinity of the crèche.

Rooms of the facility

The rooms of the facility are located on the ground floor of the old canteen, in the university building with a counseling center, library and administration. The rooms were relocated in October 2012. Due to the modern design and spacious glass fronts, the rooms appear bright and appealing. Each group has its own group room, relaxation room and bathroom. The cloakrooms of the two groups are located in the hallway, which is used as an additional play area for the children. In addition to the office, which is also used for team meetings and discussions with parents, there is also a kitchen, a material room, a washroom with a staff toilet and a storage room, which can also be used as a storage space for strollers serves. The facility includes a garden, which forms the end of the bungalows a few meters from the crib. This has a climbing tower with slide, Green space and a sandpit with a water pump.

Who can bring their child to the facility

We look after children of parents who study at a university supervised by the Munich Student Union, as well as children of employees of the sponsoring association Stud. Eltern-Kind-Initiatives e.V. or the Studentenwerk who have their place of residence in Munich.

Detailed information about the facility

For detailed information regarding the facility we have deposited the conception and daycare order here.

Are you curious? Then visit our information events page and get to know our facility on site. 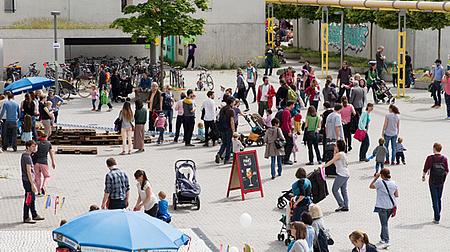 How do I finance my studies with a child??