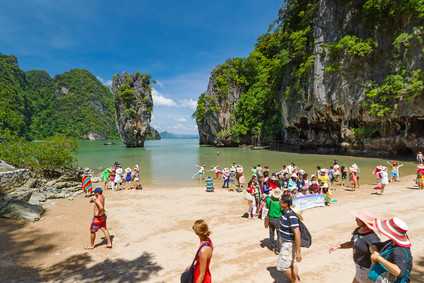 Where James Bond himself is headed

The coast of the Andaman Sea and the countless small and large islands off its coast have developed into one of the top destinations in Thailand in recent years. Millions of holidaymakers travel every year during the high season from the end of November to March to the region to spend a dream holiday on Phuket, the Koh Phi Phi Islands or Khao Lak with bathing fun and diving opportunities in mass.

The Ao Phang Nga Marine National Park, also better known as the Bay of Phang Nga, is an extremely popular destination for Thailand holidaymakers. The park covers an area of almost 400 km² and consists of four fifths of water. The rest consists of 42 islands, mangrove forests and rugged limestone cliffs on the coast, which form bizarre formations and are popular with climbers and photographers alike.

Only 45 minutes from Phuket and just under 1 ½ hours by minibus or van from Krabi, the bay of Phang Nga attracts thousands of visitors, which of course can lead to photos being difficult to take without other tourists in the background. We will tell you which tours are worthwhile and when it is best to be on the road to explore this uniquely beautiful area in peace and quiet!

Sights in the bay of Phang Nga

Of course, the bay of Phang Nga is best known for its “appearances” in the famous James Bond film series: Not only was the little rock pin Khao Ta-Pu used for some scenes in the movie “The Man with the Golden Colt”, but at the end of the movie it was even blown up – thanks to some resourceful special effects – with a lot of noise. Today the little rock attracts the visitors in droves – and that’s to be understood literally. Especially in the high season, dozens of boats come in every day so that tourists can pick up the rock from all directions. So if you want to take a shot with non-waving tourists in the background, you should either try to show up as early as possible or stop by in the late afternoon. In the sunset, the rock looks especially pretty!

Actually the rock needle was a part of the island of Khao Phing Kan, but it broke off a long time ago. The island rises steeply over 300 meters and is perforated by caves, grottos and craggy cliffs, to which the plants cling elegantly and with all their might. 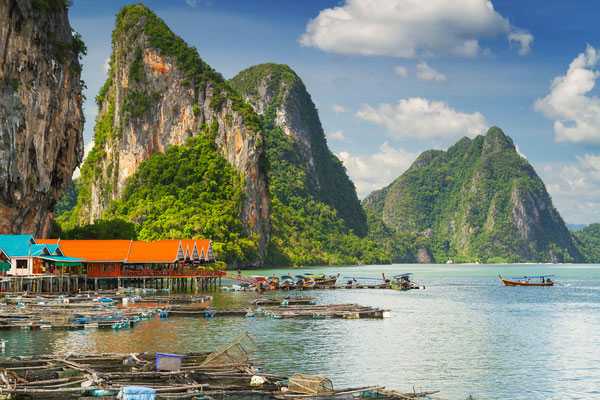 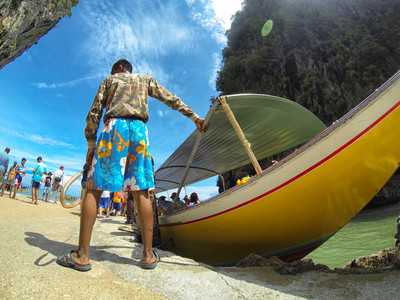 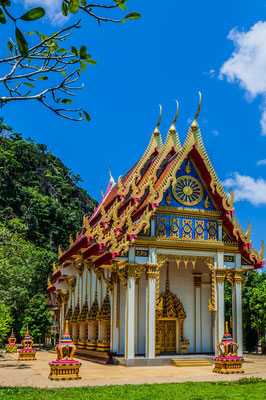 If you come from Phuket or Khao Lak, a tour with the longboat is worthwhile in any case: first, you are driven by minibus or van into the heart of the mangrove forests, where you board the longboat at a small jetty. From here we start into the thicket of mangroves – a mysterious and fascinating world where you can observe numerous animals. The fauna ranges from small lizards to various species of snakes, from colourful butterflies to flying foxes. The mangroves manage to surprise their visitors again and again.

Once through the mangrove forests, suddenly the bay of Phang Nga opens in front of you and this is really a breathtaking sight. The steep cliffs, the clear water – the best thing to do now is to change to a kayak and explore the different small islands under guidance.

But there are especially private tours available, where one is only on the way with one or two kayaks and can moor almost anywhere one wants. Experienced tour guides know the most beautiful caves and grottos, in which one can dive into this mysterious world that rightfully made the Phang Nga Marine National Park a UNESCO World Heritage Site.

One of the insider tips of the national park is and remains the island Koh Hong; until now, it has not been flooded by the tourists and there is a very special reason for this. In Thai, Hong means “room” or “room” and this has to be taken literally. Every day – but only in a period of half an hour – one can swim through or wade through a narrow crevice in the rock and reach a grotto surrounded by rock walls, which is however open towards the top. A dreamlike beach in the midst of this unreal environment is just waiting for you to relax and forget all your worries.

Last but not least there is the small fishing village Koh Panyi (also written Ko Panyee). The fishermen, who settled here at that time, came from Malaysia and were not allowed to own their own land as non-sharks. Therefore the villagers built their huts completely on stilts in the bay! Today almost 1500 people live here, still (almost) the same as then. Only a mosque and a freshwater well have been built on land in the meantime. Koh Panyi has another curiosity: a football field on the water! And the young soccer players have become so successful that they belong to one of the best Thai youth soccer teams – even if they play on paved ground today.

Arrival Phang Nga Bay – How to get there?

Phang Nga Bay is located in the province of the same name. From Phuket you can either take a minivan or a minibus to reach the bay in 45 minutes. From Khao Lak, the largest town in Phang Nga province, it takes about one hour and thirty minutes.

The best travel time is, as almost everywhere at the Andaman Sea, from the end of November to March – however, the Phang Nga Bay is relatively protected, so that the waves do not rise higher than one meter in April or May. Those who can live with the risk that one or the other excursion might be cancelled due to rough weather can also come here in the low season – especially in August. By the way, then, one is not only rewarded with cheaper prices when booking the hotel, but also with clearly less crowds at the sightseeings of the bay of Phang Nga.