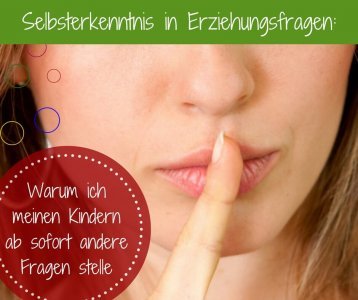 I think it’s really important to take your children seriously, to involve them, to ask them questions, to discuss with them. All of that. But it seems like the questioning has gotten a bit out of hand lately. And not just with me! "Many mothers constantly ask questions to their children, even though they actually want to make statements," observed the graduate social pedagogue Sandra Klötzer from the Kulmbacher multi-generational house and luckily made me aware of an important topic. Specific examples of questions that shouldn’t be questions are these:

The “problem”: the child answers

"Anyone who asks questions must first think about how to deal with the answer," said the expert. And she is right. When I say to my child: “Are we going to pick up your sister from kindergarten?” And it says “no”. Then what do I do? Is it an option to stay at home? Do I really want to let my child make this decision? It can’t weigh it up yet. It only knows itself and its own needs.

Many questions for children are asked purely rhetorically. And that’s sad. "If you want something, you should clearly formulate this wish and not pack it as a question," says Sandra Klötzer. We expect the same from our children – that they formulate what they want and not just ask what others want. If everyone said what they want, you can still agree. Or fight the conflict.

Asking a question and then not taking the expressed will seriously, I find that pretty disrespectful to the child. Persuade a child when asked a question … something like this: "Come on, then you can play with your sister", or "Then we’ll get some ice cream on the way." Or whatever. We want to create a feeling of togetherness and a shared experience. But in the end – to put it bluntly – we are forcing our children on our will and talking to him that his will is wrong. And something else:

How should a child give an answer to a question that goes beyond the child’s horizon in its complexity? Is it not rather that questions, the scope of which it does not yet understand, are simply forced to say something? “Many parents are afraid of the conflict – but in the end it is the case that children with the a lot of Questions are simply overwhelmed, ”said Klötzer. And then there is no energy left for the questions that really concern them.

That applies to the question after this Pick up the sister. This is clearly a question that a child cannot answer. He is asked to answer, the consequences of which he is unable to understand. Kindergarten may be closing, his sister wants to be picked up or whatever. That’s not a question. That is a statement. "We’ll pick up your sister from kindergarten." Actually, you should start a few minutes earlier. No matter whether you go home or leave or whenever: “You can still play it to the end. But in a few minutes we’ll be going to pick up your sister. ”For example. Then the child can still say that it does not want to. That is his right. But as a mother, I also made my point clear. And then you can discuss, assert yourself or whatever. Everyone has their own ideas about the amount of authority that is right. I don’t want to get involved. But it remains: the child learns that there are different views on one level. And that is valuable.

Questions remain important to me!

Yes, I still think it’s important to ask his children a lot. But now I try (even more) to ask the right questions and especially only to ask them when I really want to know something. And I want to make sure that there are honest options instead of just hypocritical ones. Because I owe this honesty to my child. Only if I am honest do I take my child seriously.