Choosing police as a scavenger hunt, I had this brilliant idea. Not yet. A very good friend came on this scavenger hunt and held it on the children’s birthday party. The kids loved it. I am happy to pass on the game ideas for the police scavenger hunt. Let’s turn on the blue lights!

A scavenger hunt under the motto police inspires the children. Boys and girls. It started with the invitation to the children’s birthday party: it is printed on blue paper and provided with a police car. It contains an “official subpoena” for the police candidate test.

Scavenger hunt police: from 110 to a thousand!

Before the scavenger hunt, each child was given a clipboard with pen, parking ticket, ID card and hat. To get the title of chief sergeant, the children had to solve various tasks at the police scavenger hunt.

At this play station, the children had to do the following: One group had to write down the car numbers of ten red cars and the other group the license plates of ten blue cars as quickly as possible. After all, they were all potentially prohibited from stopping. That really doesn’t work!

– “Traffic ticket” (you print it out yourself on the computer)

During the paper chase, the children continued to search for new cases. But wait a minute. Which real police officer is walking all the time? Experienced crime scene seers know, how important a car for one Is investigator. 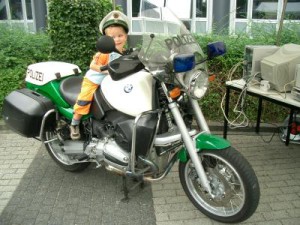 At our police scavenger hunt, the little ones are afloat.
photo (c) R. B. / pixelio.de

Even if the children would like to drive dad’s cars while scavenger hunt, they had to get by with a boby car. In contrast to a company car, this is much more agile when it comes to covert investigations and is therefore perfect for combating crime. Draws a “parcours” for the bobycar on the floor with chalk. The children have to do it. For those who want to go to the motorcycle relay, there is a tricycle.

Our police officers learn from this police scavenger hunt on children’s birthday that evil lurks everywhere. Party guests per se represent a great danger on the road. Some people drink more than is allowed. That’s why there is the next game

"Please blow into the tube!"

Here we form two groups and each group has to inflate and knot three balloons. Then a child sits on the balloon and bursts it. 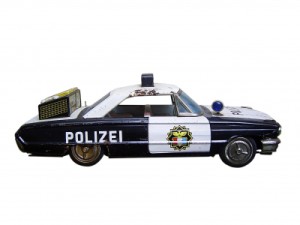 Anyone who believes that a prospective policeman doesn’t have to have anything in mind is extremely wrong! But on the contrary. Remembering details is essential to this job. That’s why our police have a paper chase

We continue on our police scavenger hunt. It is extremely important for a prospective police officer to draw a phantom picture.

You show a child a photo with a familiar face on it, such as the robber Hotzenplotz. Now this child has to describe to another what the Hotzenplotz looks like. This child is now drawing a phantom picture according to the information. The other children try to guess who it is.

At the end of the police treasure hunt, each child receives his certificate of appointment as chief sergeant and a small gift.