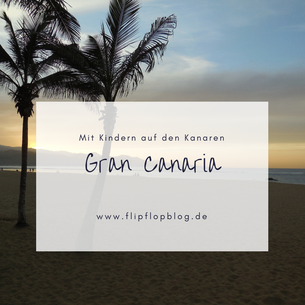 In Gran Canaria, many think first of all of the images of the endless dunes of Maspalomas, finally are these also the most photographed motif of the island. And as beautiful as the dunes are, many Gran Canaria holidaymakers really don’t see much more of this island, which offers such fantastic natural landscapes. And also the most beautiful city in the world Canaries with the Copacabana of Europe.

Gran Canaria should definitely not be underestimated, the island is perfect for a family vacation between the beach, the city and lots and lots of nature! 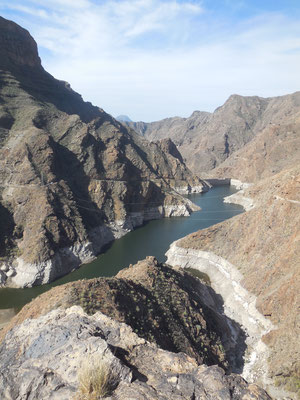 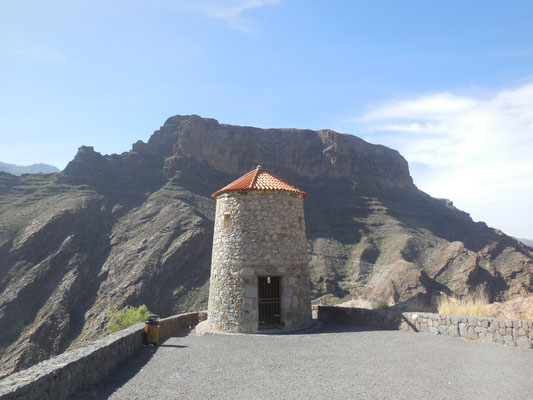 Our series is also about comparing the individual islands, showing the special features, but also similarities. As far as the climate, tourism and the landscape are concerned, we believe that Gran Canaria is comparable to Tenerife in many ways. The high mountains in the interior of the island, the green, more rainy north and the dry beaches in the south (and there also the large, built-up tourist centers). And yet, you guessed it, Gran Canaria is of course very different from Tenerife.

The landscape is more lovely and less rugged, but still spectacular, the interior of the island is populated and developed, there is agriculture and beautiful mountain villages. But read for yourself:

Gran Canaria is only the third largest of the Canary Islands after Tenerife and Fuerteventura, but it is still the island that gave its name to the entire archipelago. Gran Canaria is almost round and has a diameter of only 50 km. That doesn’t sound like much at first, but since the interior of the island is quite mountainous (up to almost 2000 meters high!), The distances across the island are not as short as you might think.

Similar to Tenerife, the mountains divide Gran Canaria into different climate zones. The north is significantly more rainy and therefore greener, the south is drier with significantly more hours of sunshine. Our holiday resort Puerto de Mogan (also called Little Venice, very cute) has a microclimate that has been recognized by UNESCO, supposedly one of the best in the world. Well then … J

Las Palmas de Gran Canaria: The capital of the Canary Islands offers a very pretty old town, the Vegueta. There is a Columbus Museum, nice plazas and a great shopping street to stroll around and with very nice tapas bars. And of course a worthwhile market hall, as it should be for Spanish cities. And, the jewel of Las Palmas, the beautiful city beach Playa de Las Canteras (see "beaches"). 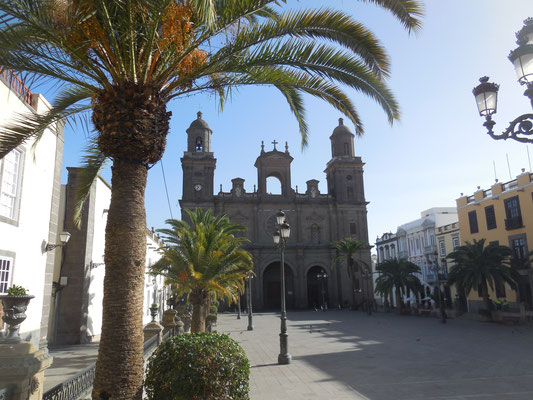 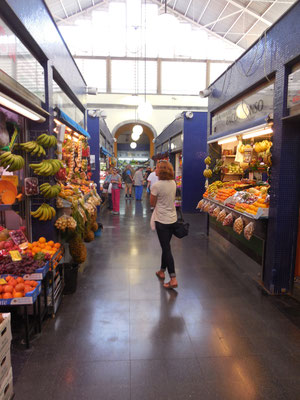 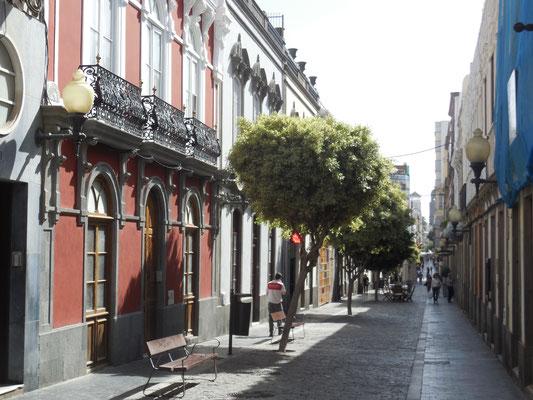 Tejeda: Gran Canaria’s interior, like on the other Canary Islands, is characterized by the mountain landscapes of extinct volcanoes. Here Gran Canaria is much nicer than Tenerife (and as Lanzarote or Fuerteventura anyway). There are many green valleys in the mountains, agriculture and picturesque mountain villages. Such as. Tejeda, the Mandeldorf. Almond trees grow around Tejeda while our visit in January bloomed splendidly. Tejeda lies at an altitude of 1000 m, the village with its white houses is terraced on the mountain slope, spectacularly framed by two high rock formations. It is not really surprising that Tejeda has already been voted the most beautiful village in Spain. The other highlight of Tejeda besides the spectacular look are almonds in every shape. Delicious almond biscuits, chocolates, almond cakes, almond butter, marzipan, almond liqueur…. If you like almonds, I can indulge in Tejeda! 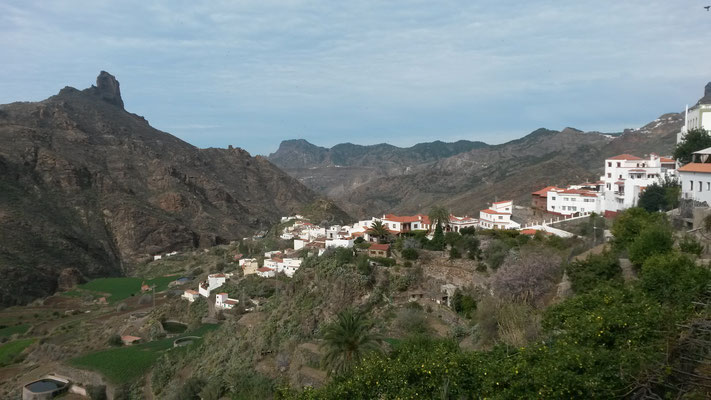 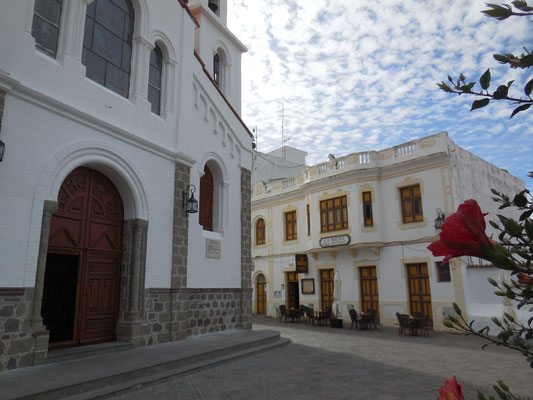 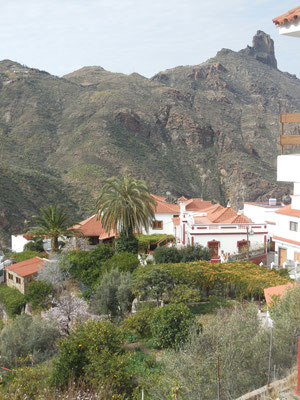 Cliff / Mirador del Balcón: On the west coast winds its way between La Aldea de San Nicolas to Agaeta Gran Canaria’s panoramic road. At the viewpoint Mirador del Balcón you have a grandiose view of the impressive cliffs, which were formed by wind and waves from the volcanic rock over millions of years. The road meanders spectacularly along the rock face. Another one of those places where you can understand why the Canary Islands are called "the Hawaii of Europe". 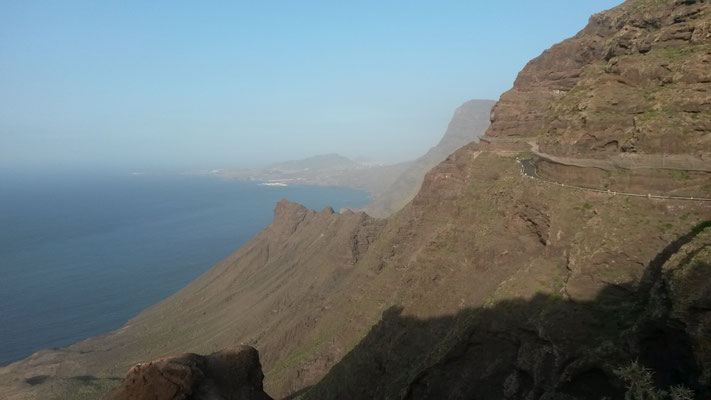 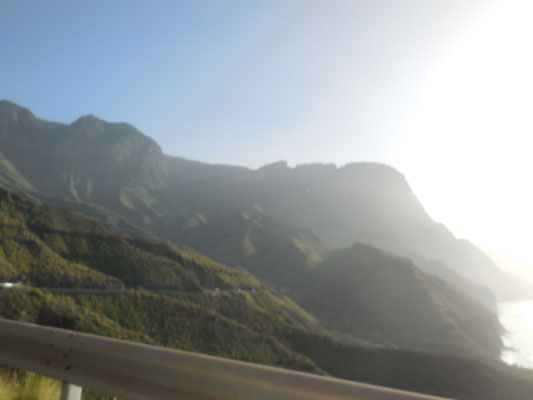 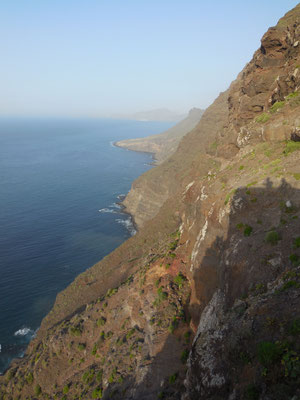 Barranco de la Aldea / Artenara: A spectacular road winds through a deep canyon, past reservoirs, orange trees and a cave village to Artenara, the highest island village. Here some residents still live in traditional troglodyte, that are hewn into the rock. There are often front porches in front of these apartments, so that it is not immediately apparent that they are cave apartments. The viewpoint at the La Cilla restaurant is recommended. Food and service are not that great, but the view is unique. The Mirador de Unamuno also offers a fantastic view. 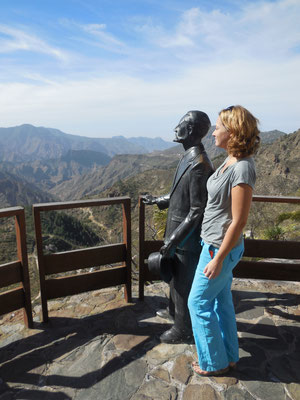 Valle de Agaete: a beautiful valley that rises 9 km from the sea to 1000 m. Not only do avocados, oranges, mangoes or papayas grow here, but also Europe’s only coffee grows here, which of course can also be tasted in Agaete.

Farmer’s market in Teror: Le >You also have to have goals for the next time.

Maspalomas Dunes: For many the epitome of Gran Canaria (which of course does not do the island justice!). Beach as far as the eye can see. Wandering dunes until

Dunes are protected and offer living space for a very special flora and fauna.

You can hike through the dunes and children can romp wonderfully, but you should definitely respect the cordoned off areas. The only official nudist area on the island can also be found in the dunes.

Generally they are Beaches on the southern tip really great, fine sand and almost endless. You can walk for hours on the beach. The coast there is too closed to us personally, but the beaches there are of course a dream, especially with children. 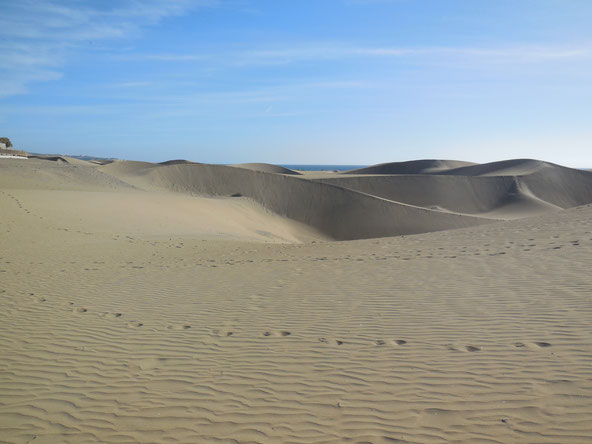 Playa de las Canteras: The 2 km long, golden city beach of Las Palmas is often called "Copacabana of Europe", the most beautiful city beach in Europe, one of the most beautiful in the world … There are many superlatives. It is undisputedly a really beautiful beach in a wide, curved bay, surrounded by hills. A wonderful, long promenade to stroll, drink cortato or sundowner, go out to eat or just push with a pram. Of course there are also a few tourists here, after all we are in Gran Canaria. But essentially, the beach belongs to the Canarios, the inhabitants of Las Palmas, who enjoy their free time swimming, sunbathing or doing sports, jogging on the promenade or simply spending the day off. A wonderfully lively and authentic atmosphere. 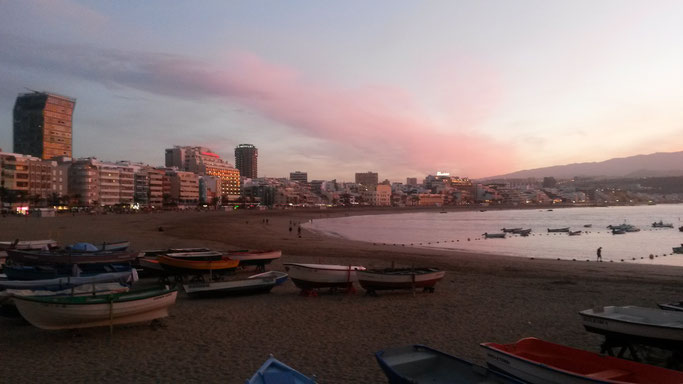 Windsurfing: As on almost all Canary Islands, Gran Canaria also offers good opportunities for water sports enthusiasts. It is not for nothing that the German windsurfing world champion Philip Köster grew up in Gran Canaria. The best way to windsurf is in the east of the island in front of Pozo Izquierdo.

hike: Gran Canaria is predestined for hiking, also due to its mild climate. The mountains in the middle of the island offer countless great hiking trails.

A “classic” and a short, easy hike, which can also be done with kids, is the hike from El Sao to the cave village of El Hornillo along a gorge in the middle of beautiful nature.

Whale watching and dolphin tours: Off the coast of Gran Canaria there are plenty of whales and dolphins, which you can take on a boat trip e.g. can view from Puerto Rico. A highlight for young and old!

from our accommodation in Puerto de Mogan to Las Palmas because we fell in love with the city. Fortunately, thanks to the well-developed coastal motorway, it went quickly. Here we would have loved to set up a permanent winter camp. 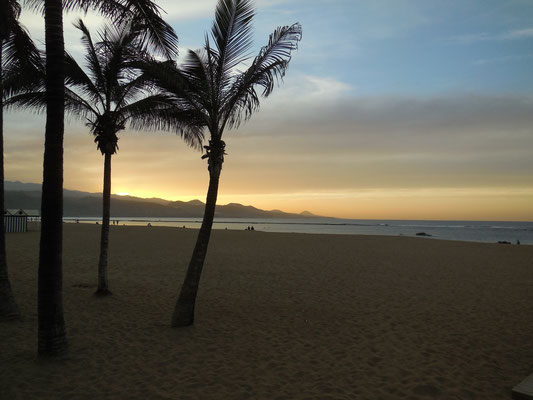 But we would also recommend our holiday resort Puerto de Mogan at any time: the wonderful climate, sunny and sheltered from the wind, the cute colorful alleys around the harbor, the small beach. It is also a place that is now only aimed at tourists, but much, much smaller and more charming than the castles in the south. 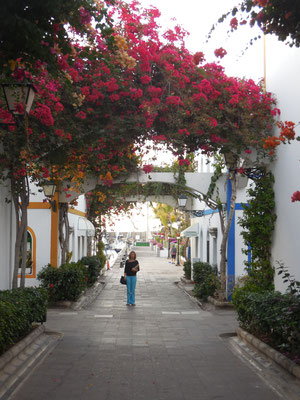 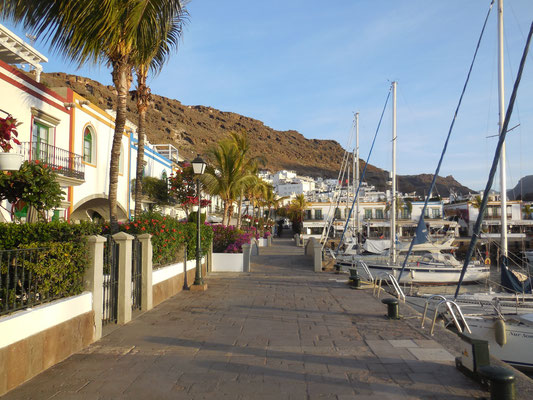 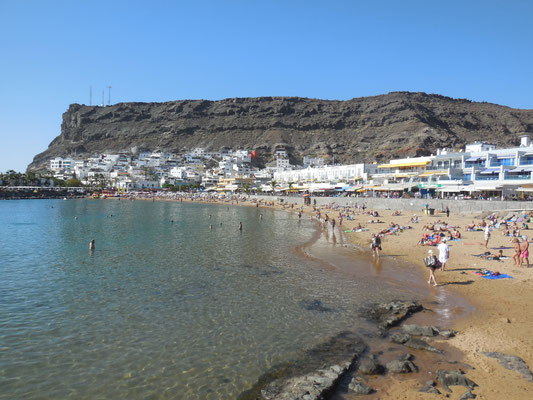 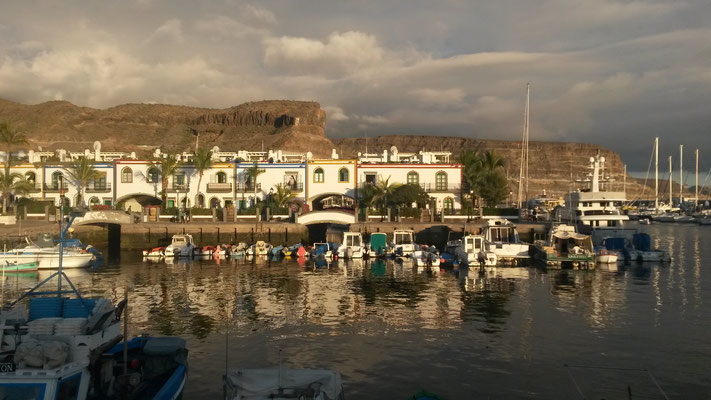 Even though many people think of beaches and dunes near Gran Canaria, we were most impressed by the island’s nature. Whether beautiful mountain villages, fertile valleys or countless hiking trails, that is what makes Gran Canaria special for us. The beaches in the south, especially the Maspalomas dunes, are undoubtedly impressive, but the mass tourism and architectural sins from the 1960s and 1970s are unfortunately also partly similar to those in Tenerife.

But these places of mass tourism only make up a really small part of the island. Gran Canaria also offers wonderful vacation spots away from the hustle and bustle, in the middle of nature or on quieter coastal sections. And the island is actually much too good for a pure beach vacation. Unfortunately, we were only there for a week so far, but we were traveling a lot. And still have a terribly long list for next time!