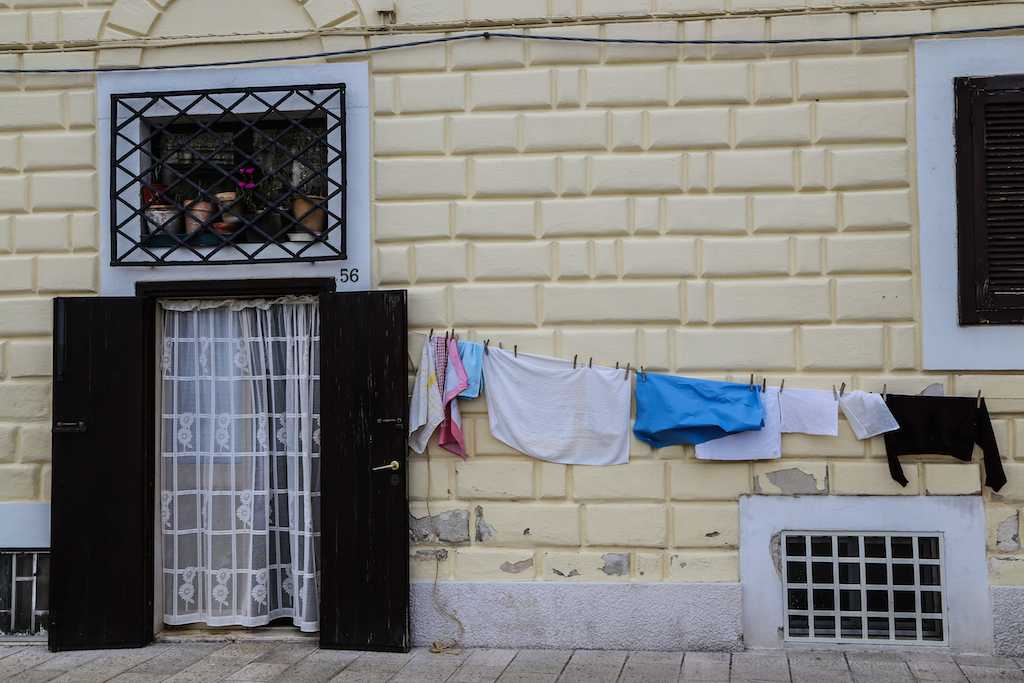 The sea, I have to go back to the sea. “… è possibile fermarci un attimo al mar?” Excitedly I look up from the mobile phone display, directly into Robertos face, which hangs over the backrest. He briefly pulls his eyebrows together, then laughs off screaming. “Mare,” he asks when he gets his breath back. “You want to go to sea?” There you go, it worked.

It is my fourth day in Apulia and in few hours my flight goes back to Germany. But I can’t leave without taking a last look at this turquoise blue, shining sea. Unfortunately I am today alone with Roberto on the way. He hardly speaks English and I only speak Spanish, which is not very popular in Italy. On the way back from the streets of Alberobello, I therefore thought about how I could make my wish clear to him. I still have a few hours until the departure from Bari, which is only a short drive away. And I don’t want to spend it at the airport, but at the sea. So I asked a friend in Germany for a translation via message – and just read the result aloud. Obviously with success.

Shortly after, the car is on its way to the coast. I lean back and let the film of the past days run in front of my inner eye. A good 72 hours ago I boarded a plane in Munich. Since then I have experienced such an incredible cascade of pictures, colors, moods, moments and impressions – as usually only on a journey of at least two weeks. I had never expected it when I set off at the invitation of the Puglia Tourism Authority. The program was crisp and short. A few villages, restaurants, wine, olive oil – just clichés. Taking some photos, capturing some film sequences, reporting live about the roadshow touring Northern Europe, a normal job. I have also been to Apulia. It was the summer of 1985, and I remember a classic beach holiday with my parents. Orange ice in hollowed out shells, windsurfing boards, sinkers as big as overseas rafts, deckchairs, parasols, withered grass, sunburn and lots of beaches. Summer holidays on the Mediterranean in the 80s.

Blue in all shades

How wrong I was. All this has nothing to do with the Puglia I have seen in the last days and hours. Nothing to do with the steeply sloping coasts, their rugged and incredibly picturesque rock slopes and chalk cliffs. Nothing with the sea, which can change within a few minutes from the whipping and foaming sea, to the turquoise green, lovely in the sun glittering, graceful. Nothing with the original, sleepy and at the same time lively places in Gargano, where every stone of the medieval cobblestone seems to tell a story. And nothing with the incredible hospitality and curiosity with which I was welcomed here.

I wanted to capture a few moments, scenes and experiences. In the end it has become such a staccato of unforgettable and beautiful pictures and moments that even today, two weeks later, while going through the photos, I can hardly arrange all the impressions. So I’m going to leave that and instead take you on a disorderly journey through all the shades of blue. Because if I had to summarize Apulia in one word, that would be “blue”. Dark blue and turquoise, azure and sky blue, green blue, petrol, cyan, night blue and aquamarine, cobalt blue and indigo – it seems that a scatterbrained painter has poured out his entire palette of blues directly over the Adriatic coast.

Just a few hours ago I arrived in Puglia. I quickly parked my bag in the hotel and immediately made my way towards the city centre. The weather is nasty and completely untypical for the season. A strong wind whips through the streets and at the quay wall the spray foams furiously against the concrete. What luck!

In the narrow alleys of the old town, there is practically no wind and again and again the sun looks out between the clouds. But apparently the weather has driven all the other tourists away. Almost alone I walk through the winding cobblestone streets of Bari Vecchia, on whose sides the houses seem to lean towards each other towards the sky. Laundry flutters in the wind, some boys chase past me with a football, a beggar waits in front of the church and wants to push the obligatory branch into my hand. Friendly, I lean back and walk on. At the square in front of the fish market I find a small café. After a Focaccia, the “cake” Baris, and an Espresso I arrived – in Apulia.