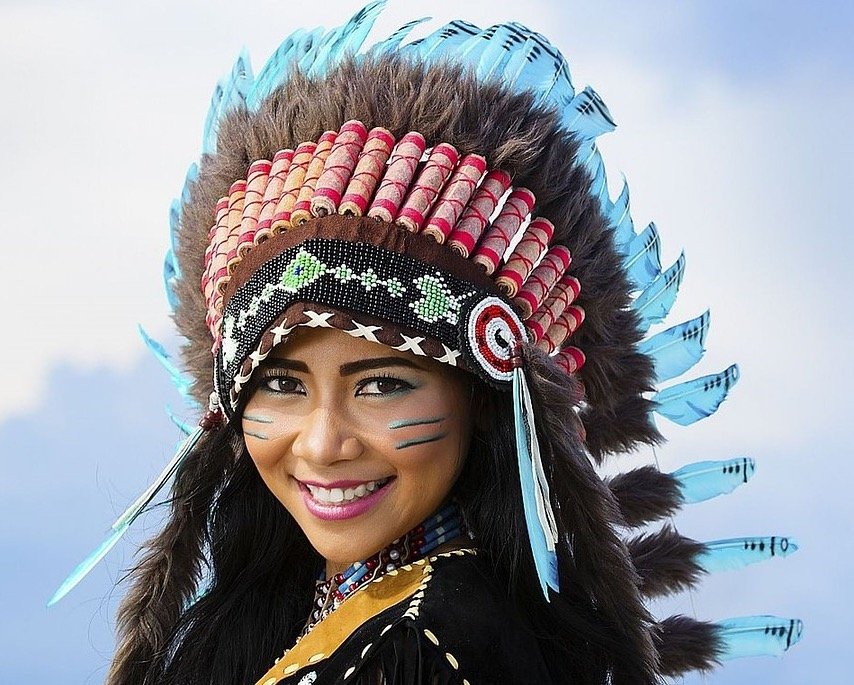 The Cheyenne called themselves Dzitslistas = people of our kind. In the Dakota language Cheyenne – people of another tongue. The Cheyenne belong to the Algonkin language family and once lived in Minnesota, where the Santee – Dakota were also located. In 1675, they left their Minnesot homeland and settled on the Missouri River. Here they lived in earth huts and pursued Acer construction. As before, they grew corn, beans and pumpkins. They also gave up their homeland and migrated to the prairie, where they devoted themselves to buffalo hunting. During their hikes through the prairie, there were repeated armed conflicts with the Assiniboin, Crow and Ute.

The Cheyenne became real prairies in the 19th century because of the huge herds of buffalo. Her pride almost bordered on arrogance, which was true of many plain tribes. The women also had no subordinate position. They had friendly relations with the Arapaho, with whom they also allied. The Cheyenne’s archenemies were the Tetons, Comanches, Kiowa – Apaches and the Kiowa. With these tribes, the Cheyenne came together more and more due to the spread of the horse and there were raids on both sides. In 1840, however, a peace commission was passed between the two parties and friendly relationships were established, which was also urgently required due to the white people advancing further and further west.

During this time, the Cheyenne was divided into two independent tribes, namely the Northern and Southern Cheyenne. The Northern Cheyenne lived in the area between the northern arm of the Platte River and the Yellowstone River, where the Tetons and Northern Arapaho also lived. For the Southern Cheyenne, the area between Colorado and Kansas, that is, between the south arm of the Platte River and the Arkansas River was your home. Both tribes kept in touch despite the separation.

The Southern Cheyenne and its allies, the Comanches Indians, Kiowa Indians, and Southern Arapaho, went on campaigns to Mexico. There were also heavy battles with the Apaches. The Southern Cheynne were involved in all the Plain Indian wars against the white invaders between 1860-1878. At first, the Cheyenne tolerated the cowboys who crossed their country with their herds of cattle. For this, the cowboys had to pay a toll, which was paid to me when some cattle were given to the Cheyenne. When the cowboys gradually took over Cheyenne land in Bezsitz, there were hard battles with the cowboys. Furthermore, the Cheyenne fiercely resisted the construction of the railway. The Northern and Southern Cheyenne also fought with the Sioux against the U.S. Army in the battle at Littel Big Horn to avenge their comrades-in-arms for the gruesome massacres of Colonel Chivington in 1864 and Colonel Custer in 1868.

After heavy losses to warriors, they had to give up the fight. the Northern and Southern Cheyenne were surrendered to Oklahoma Indian Territory. Under chief Dull Knife, a few hundred Northern Cheyenne brought to Kansas in 1878 because she with did not agree to the corruption of the Indian agents. They inflicted devastating defeats on a far superior US Army before they had to surrender. The survivors were located in southern Montana between Tongue and Littel Bighirn.

Membership in one of the Six Men’s Associations was voluntary, the leading of these associations were the Dog Soldiers as well as other Plain tribes. The Cheyenne attached great importance to their tradition and the regular rituals. So one assumes that it was the Cheyenne, the the Introduced ceremonies of the sun dance and cultivated it in its perfect atr. A so-called >>holy bundles > holy bundles >

1865>> Powder river expedition; Campaign against the Sioux Indians and Cheyenne by General Conners.

1866-68 >> Red Cloud’s War; Lakota and allied Cheyenne and Arapaho are fighting for the closure of the Bozeman Trail.

1874-75 >> Red River war; Campaigns against the Cheyenne, Comanches and Kiowa.

1876 >> Battle of the Little Bighorn. Cheyenne and her allies attack the 7th U.S. cavalry under the leadership of Custer, causing major disaster to the American military.