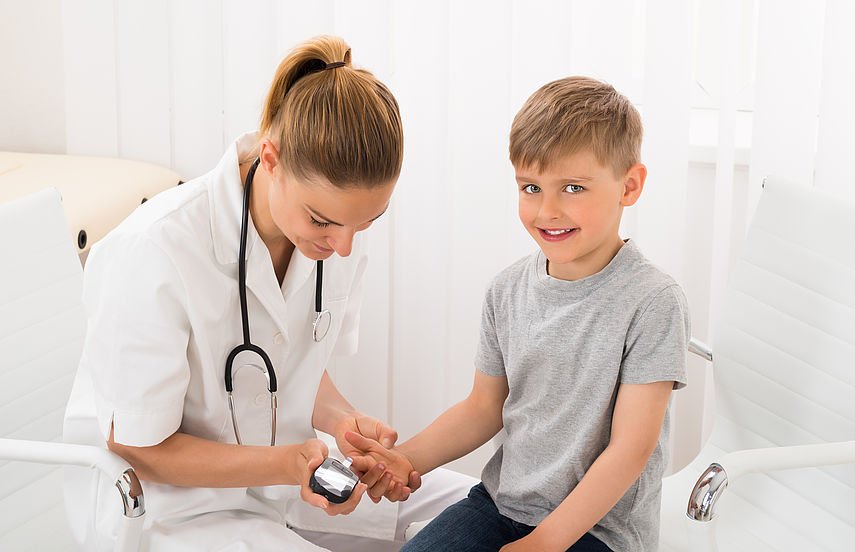 In total, around 3,000 children under the age of 15 are affected by diabetes in Austria, very often adolescents during puberty. The first signs are feeling thirsty, frequent urination, fatigue, tiredness as well as poor performance and concentration as well as cravings.

If the disease is not diagnosed in time, there is a risk of ketoacidosis, a severe metabolic derangement from which a life-threatening diabetic coma can develop without rapid medical help. Type 1 diabetes is an autoimmune disease in which the pancreas no longer produces insulin; the missing insulin must be replaced with medication throughout life.

In Austria Around 2,500 to 3,000 children and adolescents (up to 15 years) have diabetes. 95% of them are type 1 diabetics, which is why this form is also known as juvenile diabetes; in contrast, type 2 diabetes is often mistaken "adult-onset diabetes" called.

In Germany around 300 children develop diabetes every year, although boys are affected a little more often than girls. While the number of new types of diabetes type 2 remains constantly low, there has been a sharp increase in adolescent type 1 diabetes in recent years. Most frequently fall ill Children on the threshold of puberty, another disease peak is between the ages of 3 and 4.

Type 2 diabetes in children and adolescents

This is how type 1 diabetes develops in children

Type 1 diabetes mellitus is a chronic metabolic disorder and is one of the so-called autoimmune diseases. The body’s immune system attacks the insulin-producing beta cells of the pancreas, the resulting inflammatory reaction (insulitis) leads to the destruction of the beta cells over time, so that less and less insulin is formed. As a result, the glucose in the blood is increasingly poorly supplied to the body cells – which need it as a source of energy – and remains in the blood.

The reason for this immune system reaction is not known, the only thing that is clear is that genetics apparently plays an important role: children of a parent with type 1 diabetes are twice as likely to develop the disease. If both parents have type 1 diabetes, the chances of children developing diabetes are 25%.

The increased incidence of type 1 diabetes in adolescents suggests that other causes such as obesity, the older age at which women give birth to children, or excessive hygiene are also possible.

The first signs that your child may have diabetes are severe thirst and increased drinking, frequent urination, weight loss, fatigue, tiredness, poor performance and concentration, and cravings. Young children may rewet at night and often complain of headaches or stomach aches.

It becomes dangerous if these symptoms are not very pronounced (which can happen) and the disease is therefore not diagnosed in time. Then there is a risk of ketoacidosis, a severe metabolic derangement from which a life-threatening diabetic coma – a state of unconsciousness – can develop without rapid medical help. The signs are nausea, vomiting, weakness, the smell of acetone (smells like nail polish remover) in the air you breathe, hard breathing and tiredness.

Diabetes in children: risk of hypoglycemia

Hypoglycemia or low blood sugar is the most common complication that can occur in a type 1 diabetic. The sugar deficiency arises when an excessive dose of insulin has been injected, which can occur especially during physical activity such as sport – when the body has not been supplied with sufficient carbohydrates. The low blood sugar level leads to symptoms such as sweating, tremors, cravings or convulsions. If this occurs, the child should immediately eat foods or drinks containing sugar (preferably glucose, fruit juices are also suitable), otherwise there is a risk of loss of consciousness and risk to life.

If suspected, the doctor measures the sugar concentration in the urine. If this is over 180 mg / dl, this is a massive indication of diabetes. Then the child should be referred to a specialized diabetes center immediately.

The exact diagnosis is made in the laboratory. The criteria are the same for children and adults; The following blood glucose values ​​should be measured on at least 2 different days:

If it is not clear whether the child has type 1 or type 2 diabetes, the so-called C peptide can be measured – part of the hormone precursor proinsulin – which is released by the pancreas to the same extent as insulin , It is almost absent in type 1 children, and in type 2 children the C-peptide value is increased by the overproduction of insulin.

Therapy of diabetes in children

The first treatment after type 1 diabetes has been diagnosed in a child should be done in hospital – on the one hand because of the necessary metabolic adjustment, and on the other hand so that the patients and their parents can receive extensive training on how to deal with the disease. Most centers can only offer this service in a stationary setting. The duration of the hospital stay is also based on these criteria.

The treatment of experts, together with the family, is tailored to the specific needs, living conditions, individual needs and age of the child / adolescent.

Diabetes in children: tips for parents

The most important thing you, as parents, can do for your child is to follow exactly the measures that were taught to you in the course of the training in a diabetes center. Therefore, always discuss your questions or problems with the treating team. This affects the blood sugar measurement, which you have to do if your child is not yet old enough to do it himself, the detection of signs of hypoglycemia or the availability of sugary drinks or food (glucose or juice, possibly fruit or Cereal bars) in the event that your child’s blood sugar level drops.

Make your child independent so that he can soon take the necessary measures such as measuring (and logging in the diabetes passport) the blood sugar level and insulin injections independently.

Follow the instructions of the medical experts very carefully and conscientiously – however "do not put your child in cotton wool". Make sure that it is one if possible "normal" Leads life and does not become an outsider among peers.

Apart from that, the transfer of information is a very important criterion: inform those who look after and supervise your child – kindergarten teachers, teachers, child minders, etc. – about your child’s illness. Likewise, private friends and acquaintances should be at least sufficiently familiar with the disease that they can take the right measures in an emergency (especially with hypoglycemia).