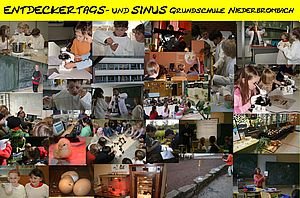 The pupils of the primary schools Niederbrombach, Neustadt, Brohl and Ellenz-Poltersdorf have been going on an exciting journey of discovery through the world of knowledge since the 2007/08 school year. Your schools are for the nationwide model project "Discover and support highly gifted children in primary school" have been selected. "These schools have presented a convincing concept of how above-average talented girls and boys can be specifically encouraged and supported in their development", said Doris Ahnen, Minister for Education, Science, Youth and Culture.

The Rhineland-Palatinate state government wants to recognize and promote talent early on through new forms of cooperation between daycare centers and primary schools. The discovery day schools should make an important contribution to this. Highly gifted children are offered special projects that take into account the interests of the pupils and go beyond the obligatory teaching content.

Our colleagues underwent intensive training on the subject of giftedness for 14 months. The attendance of numerous advanced training events, specialist conferences and extensive self-study formed the basis for the creation of a concept in which we show how above-average talented children from the primary schools and kindergartens of the school district, which are determined by a special selection process, are supported at our school. The inclusion of professors from the Trier University of Applied Sciences (Birkenfeld environmental campus), high school teachers, historians and experts from business and the arts in the Discovery Day is as much part of our concept as special forms of social-emotional learning. 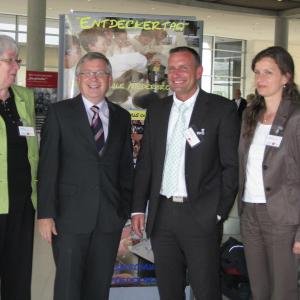 During his visit to the Niederbrombach primary school, the member of the Bundestag Fritz Rudolf Körper was impressed by the implementation of the “Discovery Day School” project for highly gifted children of primary and kindergarten age. Forty highly gifted girls and boys from the wider area are given a special all-day offer once a week with topics and tasks that go far beyond the spectrum of actual primary school teaching. The school in Niederbrombach has been one of five Rhineland-Palatinate schools since 2007, which are participating in the nationwide model project "Discovering and supporting highly gifted children in primary school". A total of 170 pupils attend normal normal school. However, Wednesday looks a little different as the "Discovery Day" for the highly gifted girls and boys. Here, according to the headmaster André Scherer, "research-based learning" is the focus. Among other things, the children work on the microscope, research independently on the Internet or use the school’s library to answer, for example, the question "Why do the leaves change color in autumn", or examine the crystals of "effervescent powder". Afterwards, a group will focus on “Japanese” on the schedule, which is very practical. Before the sports program "acrobatics" (with juggling, unicycling, etc.) it is necessary to solve tricky puzzles and challenging physical or mathematical relationships in the so-called "logic time". Since the school year 2008/2009, the newly established "researcher workshop" has enabled increased scientific work in the areas of physics, chemistry and technology. "Here the children have the opportunity to experiment independently and within the framework of an educational concept," says Scherer. "Our entire school benefits from the" Discovery Day School "project," says Ursula Meyer, class 4a teacher. Her colleague Ilka Brücher points out the importance of permanent further training for teachers. The Niederbrombach primary school is also supported by educational partnerships with the Göttenbach high school in Idar-Oberstein and the Birkenfeld environmental campus. "On primary school Niederbrombach is doing exemplary work. Equal opportunities and the promotion of highly gifted people in our education system are not contradictory, rather they complement each other and contribute to an increase in quality overall, ”says the assessment of the project by body. At the invitation of the member of the Bundestag, school principal Andre Scherer and his two colleagues Ursula Meyer and Ilka Brücher presented the project of his school in the Berlin Reichtagsgebäude. The motto of the nationwide conference was "Lead by example – Education for Sustainable Development".

Origin of the "Discovery Day" 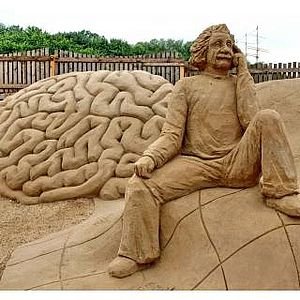 In Rhineland-Palatinate, the decision was initially made to set up their own classes for the highly gifted at high schools. The first highly gifted class started in Kaiserslautern in 2003. In the meantime, a high school in Mainz, Trier and Koblenz each offer their own gifted classes. Previously one had experience with gifted classes in the project "Promoting the gifted at high schools by reducing school time" – short: "BEGYS" – collected. Speyer started the first model test in 1991. There are currently a total of 13 "BEGYS"-Project classes in Rhineland-Palatinate.

For elementary school students, on the other hand, the so-called "explorers days" to the regular school formula plus additional funding. Highly gifted girls and boys are offered project work that goes beyond the regular subject matter. Since 2004, children from 13 primary schools and day care centers have been taught once a week at the Zweibrücken-Mittelbach primary school. Since autumn 2007, this model has also been used in Neustadt, Niederbrombach, Brohl and Ellenz-Poltersdorf. This offer is to be expanded to a total of ten locations.

An important aspect that should be considered during the “Discovery Days” is that highly gifted children do not represent a homogeneous group: each child can have very special focal points (in the verbal or mathematical area) that distinguish it from other highly gifted children. This is a real challenge for the supervising teachers. 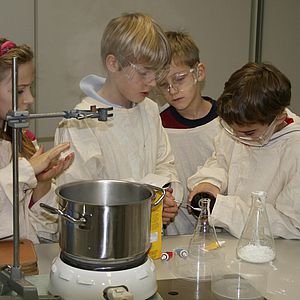 As part of our Discovery Day, we pay particular attention to the researcher learning, which focuses on the phenomena of animate and inanimate nature. It is not uncommon for the children to be able to make a direct connection to them, but which in the further course of our “research work” sometimes turn out to be very complex questions, and a high degree of cognitive, practical questions to answer, social and emotional skills are required. In this way, the current (bound) topic "Why do the leaves change color in autumn" opens up a number of different ways of tapping them.

While some of the girls and boys join together in small groups right after the start of the day of discovery and use the microscope to "examine" various leaves, other students prefer to research using the Internet or specialist literature. The children in the computer room soon recognized a connection between photosynthesis, stomata and discoloration of the leaves during the cold season. The "microscopy group", however, encounters a problem because the opaque leaves under the lens only appear as a black pattern. The idea of ​​a “varnish impression” spreads and soon all explorer children will be busy brushing the underside of the leaves with glue that can be removed after drying and viewed under the microscope.

In the next half hour, sketches of the stomata are made, the function of which is explained by the children with regard to the photosynthetic equation. The children also come across “old friends” who are responsible for the red coloring of the leaves: anthocyanins. The children got to know this as an indicator dye of red cabbage while exploring “acids and alkalis” in the days of discovery.

At the same time, Entdeckertagsgruppe 1, which includes not only kindergarten children, but also schoolchildren in the first and second grades, deals with the topic of "effervescent powder". After the various powder crystals have been carefully examined by the children and then separated according to size, shape and color, a taste test is carried out so that the young researchers can quickly determine the ingredients. These are then systematically dissolved in water to find out which ingredients are responsible for the prickling in the shower. After producing a successful mixture, the practical application takes the form of producing a "CO2 rocket".

A little later, the students of group 2 stand behind their tables in their discovery day room and greet their Japanese teacher with a loud “ohayô gozaimasu” (good morning) before each child (in Japanese) expresses their current state of mind. Afterwards, the girls and boys eagerly await the next picture card, which the teacher holds up, clearly visible to everyone, in order to enter the depicted object in a table with the Japanese characters Katakana, Hiragana, Kanji and Romaji. The Japanese names for bread, apples and mineral water are, however, still unknown to the children. For this reason, the Japanese teacher brought the food with her and distributed it to the children who asked for it in Japanese. Before the teacher starts the "Japanese" language offer for group 1, it ends on that day with the singing of two Japanese children’s songs for group 2.

After a break, the young discoverers of Group 2 devote themselves to topics that they are particularly interested in and about which they would like to learn more. The range of topics here ranges from Queen Louise of Prussia through ancient Rome to pirate women. For this purpose, the children visit the school’s own library, use the Internet for their research, telephone with experts outside of school or send fax inquiries to various institutions in order to receive useful information on “their subjects”. During this time, the pupils organize, collect and summarize the information collected and put it into a suitable form of presentation (e.g. Power Point presentation, spiral book, feature film, radio play). 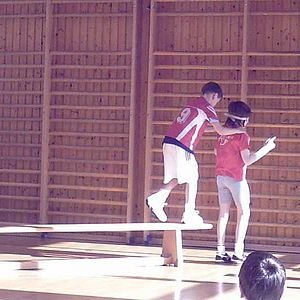 Before the children take advantage of the sports offer "acrobatics" (juggling, human pyramids, unicycling …), they are challenged in the so-called "logic time" to solve tricky puzzles and challenging (physical / mathematical) connections. To check whether it makes sense to cool a hot cup of coffee immediately after preparation, by adding cold milk, or to lower the temperature if you let the cup stand for a while and only then add cold milk, the Group discussed. After the group participants have different opinions, the situation is re-enacted by the girls and boys heating water and adding cold water to the two samples at different times. The result is just as surprising for the children as the fact that the weight of a water basin increases after a metal ball is held in with a string, but does not touch the bottom of the basin.

After lunch together and a half-hour break, which is used for reading, relaxing or entertaining, the children take part in one of the three (to four) afternoon projects. While the study and research times during the morning are offered for groups 1 and 2 for organizational reasons, the children take part in the afternoon projects in mixed groups. The “Discovery Day Orchestra” project thus forms an integral part of the Discovery Day. Under the direction of three musicians from the local music association, the children practice trumpet, saxophone, drums, clarinet, alto horn or trombone for performances during school parties and project days.

In two other projects, which are offered by colleagues from the neighboring grammar school, the girls and boys can convince themselves of the possibilities of "(new) media" or they can make extensive thoughts in the context of the project "Philosophizing with children".

So far, the afternoon offers have shown themselves as special "highlights", which are run at irregular intervals (approximately every 4-5 weeks) by the professors of the Trier University of Applied Sciences (Birkenfeld environmental campus). In detail, these were until the present time including: "Bionics", "Space", "9000 kilometers for a strawberry yoghurt", "Sound and noise", "Statistics", "Probability", "Weather and climate".