If only the young voters were allowed to vote, there would be no Brexit. Europe’s population is aging, the elderly are increasingly determining. The boys have to better promote their interests. A comment

If only the boys between the ages of 18 and 49 were allowed to vote in the UK this Thursday, there would have been these television pictures: people with blue and yellow European flags hug, politicians in Berlin and Brussels beam, a clear majority voted for “Remain” , the United Kingdom remains in the EU. But the referendum turned out differently. It was the old people who decided that. The boys in particular have to live with the consequences. Brexit is the victory of over 50s over the interests of the generations after them. Read more on sueddeutsche.de

Traffickers are unscrupulous criminals who put refugees at risk for their profit – so it is often said. They are held responsible for drowning people in the Mediterranean or suffocating them in trucks. But it does justice to the actions of the tugs?

A different picture was drawn at the event of the Bavarian Refugee Council in the Munich Kammerspiele, which was provocatively called the “International Tug and Smuggling Conference” (ISS). The conference participants drew up seven theses worth discussing. Read more on sueddeutsche.de

Can’t death in the Mediterranean be prevented? There are approaches to at least alleviate the problem.

The photo burned in: A little boy on the beach, lying on his stomach, half in the water, arms twisted. Aylan Kurdi, three years old, Syrian, died trying to cross from Turkey to Greece in a boat. One of 2,700 refugees and migrants who, according to the International Organization for Migration, have drowned in the Mediterranean alone since the beginning of the year; in the years 2000 to 2014 there were at least 22,400.

Most people react to such numbers, such pictures, concerned and passed out. What can the individual do? Angela Merkel, François Hollande and their colleagues in the government offices of the EU countries are also concerned and passed out; whoever listens to them has to nearly consider a natural law that refugees and migrants drown in the Mediterranean. The powerful in the EU would certainly have opportunities to prevent the death of many other Aylan Kurdis. Read more on sueddeutsche.de

German reporter Wolfgang Bauer accompanied Syrians on their way across the Mediterranean – and ended up in custody in Innsbruck. I have for my last butterfly-output spoken with Bauer, here is a long version of the butterfly text.

People lie shoulder to shoulder on the cold concrete floor of the Egyptian prison, men, women, children, the youngest five years old, the cries of the tortured come from the adjoining rooms. Wolfgang Bauer, 43, a journalist from the tranquil town of Reutlingen in southern Germany, is right in the middle. It is the end point of a journey that Europeans otherwise only know from stories. Nine days later, Bauer is deported from Egypt to Germany.

New asylum seekers are currently arriving in Europe every day, many thousands have drowned in the Mediterranean in recent years. We know the photos of crowded boats, coffins. We are discussing which state, which federal state, how many asylum seekers should receive, how they should be cared for. But what happens before these people land with us – how they get on their boats, how their journey goes, what dangers threaten them – hardly anyone knows.

Wolfgang Bauer, reporter for the German weekly newspaper Die Zeit, tried it out together with the Czech photographer Stanislav Krupar. Read More »

The Italian Navy saves 1900 people from the Mediterranean. The Austrian police pick up 57 Eritreans and one Syrian in a train and ship them via the Brenner Pass. There is an admission freeze in the Traiskirchen refugee camp due to alleged overload: just a few of dozens of reports on the subject of refugees that have sprinkled on us in recent weeks. It is easy to lose track of things. A guide.

Now the countries are again fighting over the distribution of asylum seekers. According to Krone, a record number of refugees came last Austria. Is that correct?

Not really. In the first half of 2014, 8395 people applied for asylum in Austria. That is less than at the beginning of the zero years, but more than from 2006 to 2011. In the past two years there have been about 17,500 applications each, about as many this year, too. Read More »

In the course of my EU election campaign reports, I asked the five top candidates from the parliamentary parties to answer three questions by email. I will compare the – sometimes quite telling – answers here again. 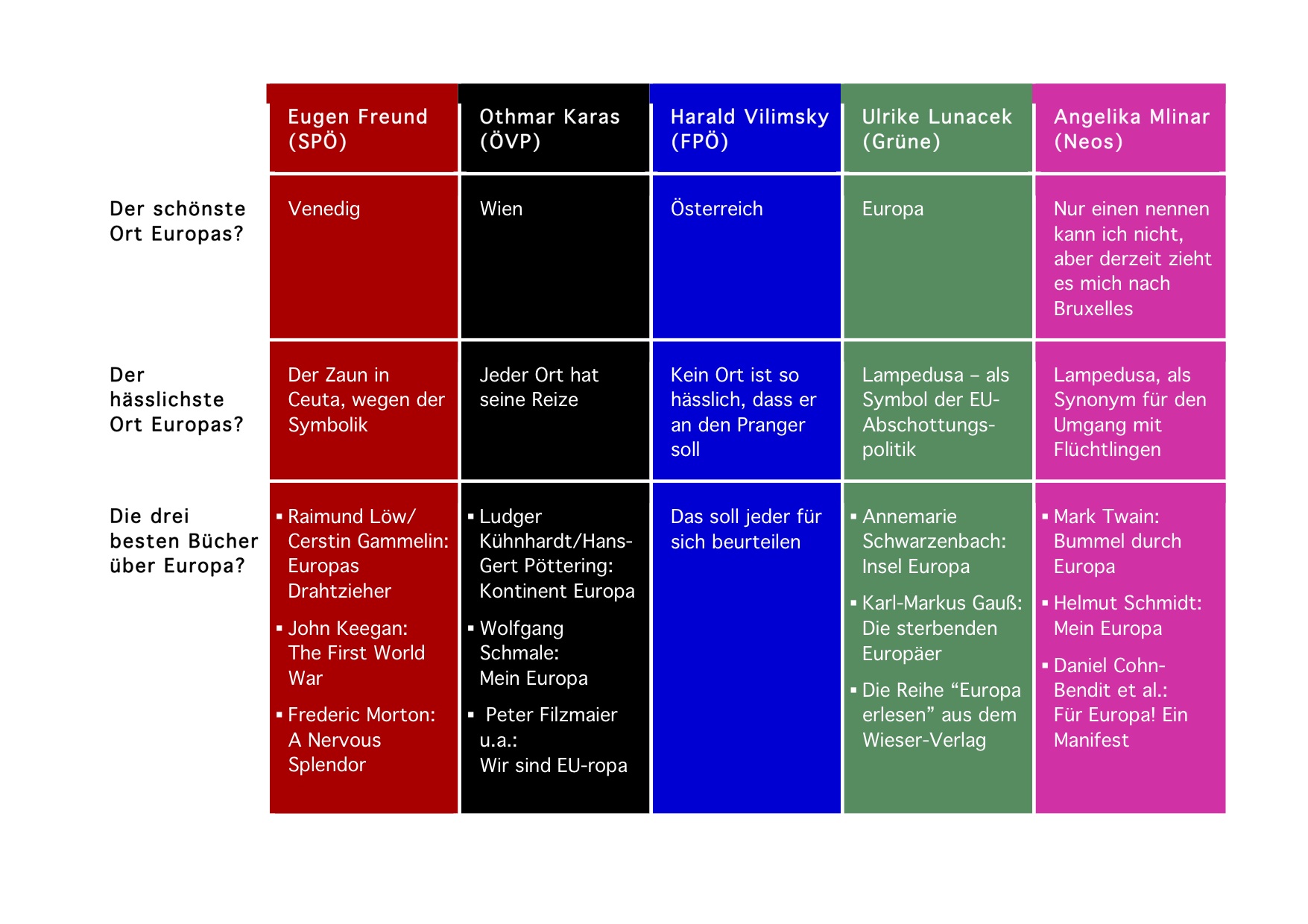 Ulrike Lunacek and Angelika Mlinar fight for the same electorate in the EU election.

Mausi Lugner is hiding. Societylady does not want to be seen in photos with Angelika Mlinar, the Neos top candidate for the EU election. It is a sunny Saturday afternoon, “Mailüfterl” street festival on the outskirts of Floridsdorf, where Vienna already consists of fields and wine taverns. Mausi’s friends chat with Mlinar. "It’s nice that you are here," says the woman, behind whose back Mausi is hiding. Then Mlinar and her squad move up the hill. They go quickly and purposefully, the opening soon begins, there is little time for shaking hands.

Many people have a whole bunch of balloons in their hands, Choice gifts in red, blue, pink and the yellow that the ÖVP uses when black is too dreary. Only the greens are nowhere to be seen. There is probably too little to get here for her; her top candidate Ulrike Lunacek prefers to mingle with the people on the Carmelite market and at a children’s flea market in Döbling.

Lunacek and Mlinar are fighting for the same electorate in this election, more precisely: Mlinar is contesting some of their voters. Former Greens who think liberally or simply think the pink freshness is great are moving away. Read More »