The Grimm brothers’ house fairy tales are not only available in books, audio books and films, Little Red Riding Hood and Snow White are also on the move in apps. Let’s use it to destroy our good, old cultural assets?

Fairy tales have a long tradition in our culture. For many, they are associated with memories of early childhood and fairy tales such as "Hansel and Gretel" have been popular for decades, especially in winter and Christmas. In the German-speaking countries, the “children’s and household fairy tales” by the Brothers Grimm are among the best known. They are so-called folk tales that come from oral traditions. Jacob and Wilhelm Grimm commissioned them on behalf of Clemens Brentano and later published them themselves, albeit in several variations.

The first editions of the house fairy tales were by no means intended for children, but rather the result of their linguistic research. Illustrations were later added, scientific notes disappeared, and the texts were adapted, in particular by decreasing sexual innuendos and violence. The Grimm Brothers’ fairy tales took off successfully and are still among the world’s best-selling children’s books.

Incidentally, the term "folk tales" is misleading, as fairy tales are not tales of ordinary people, but of middle-class circles. Many come from young girls between the ages of 16 and 18, some of whom were French. They are therefore European folk tales and not German ones (this is particularly interesting in the context of their time of origin).

Fairy tales in a picture book

As already mentioned, folk tales have undergone a major change from the start. This trend continues today continues, as fairy tales experience new modifications in various media. Well-known examples of this are films such as "Rapunzel spoiled" or the picture book "Snow White" by Benjamin Lacombe.

The picture books alone have very successful, really innovative interpretations of the well-known fairy tales. It is interesting that these are increasingly written and illustrated for adults. Fairy tales were originally intended for adults only, were later rewritten for children, and the latest trend is sometimes in the opposite direction – at least for books. 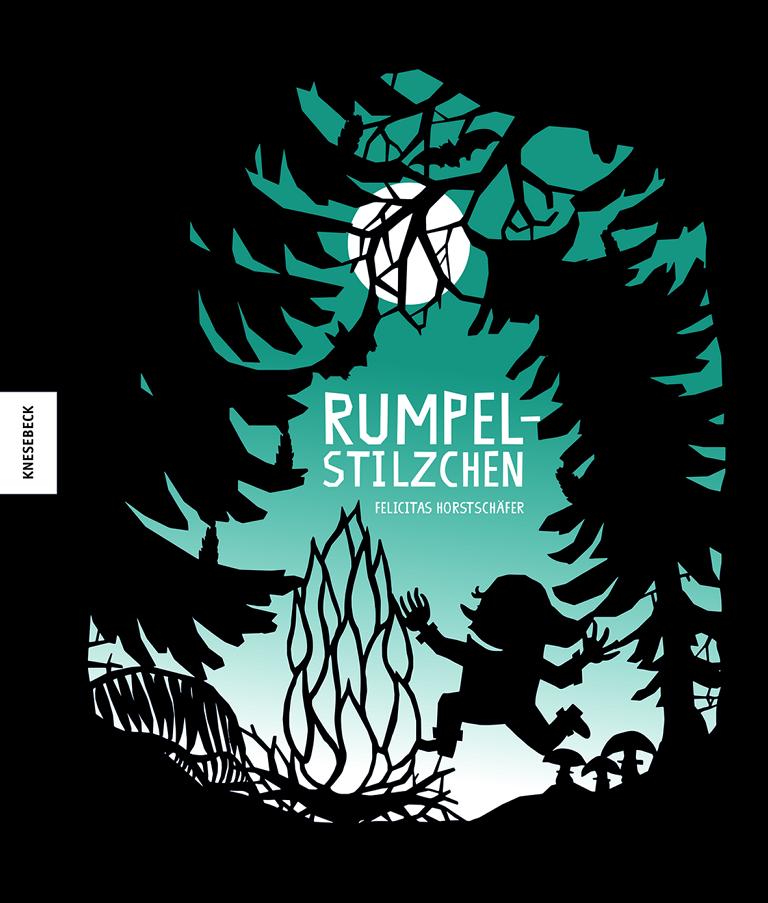 Several fairy tales have been published by Knesebeck Verlag as beautiful silhouette books. Of course, these break quickly and are therefore only suitable for children’s hands with great caution. 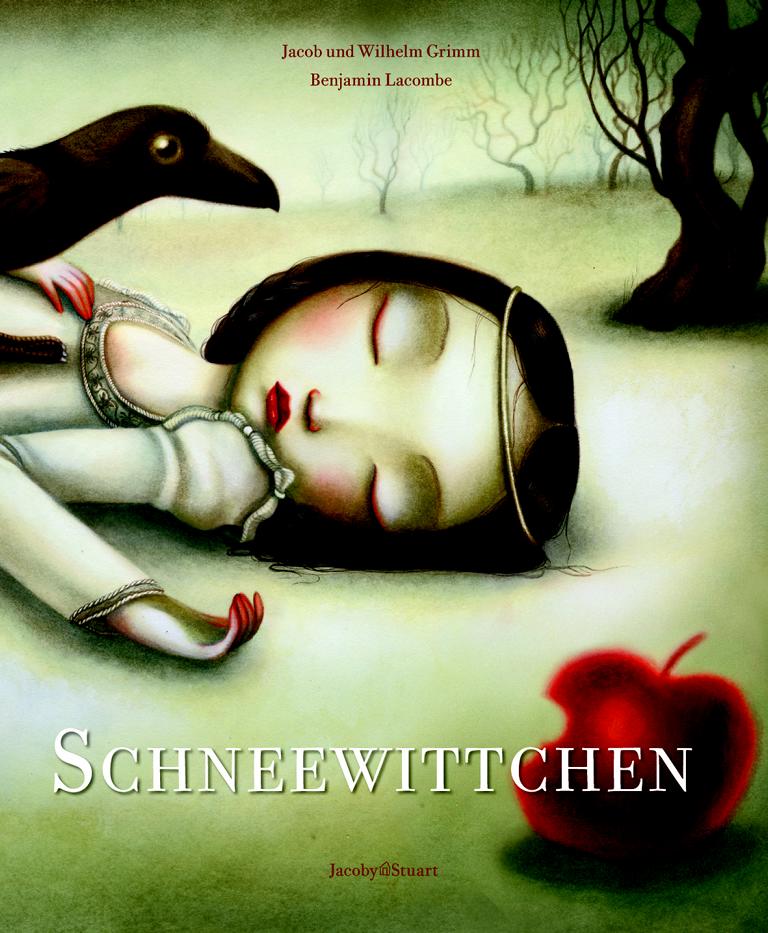 "Snow White" by Benjamin Lacombe has a threatening effect on many children. The incredibly expressive images are fascinating and full of allusions, which are actually mandatory reading for fairytale readers. 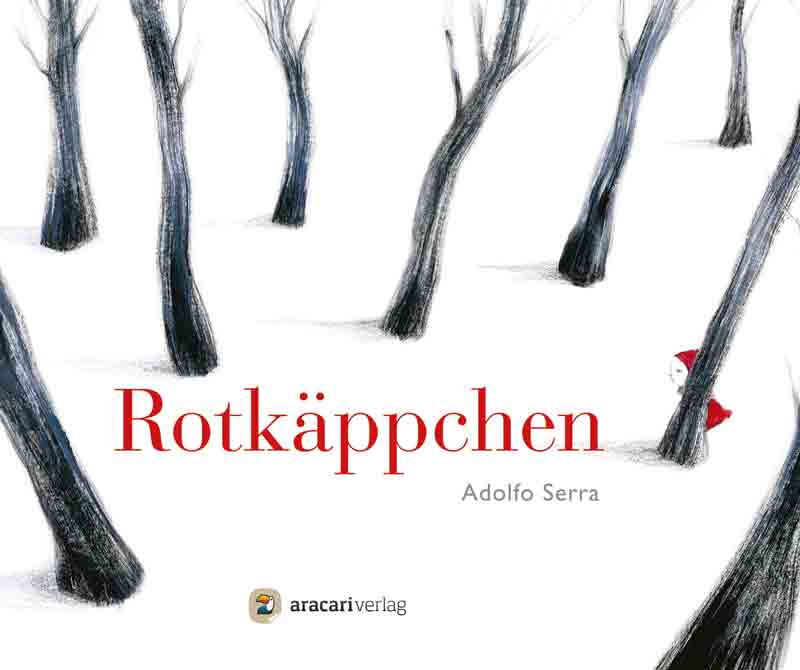 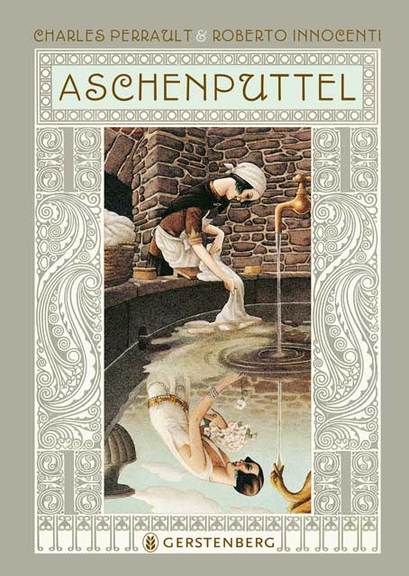 Roberto Innocenti is also well known to connoisseurs and this storybook is also interesting in words and pictures not only for children but also for adults.

Leyo! is a combination of app and picture book, i.e. a format that connects book and smartphone / tablet. The Leyo! App can be downloaded free of charge, the Leyo! Books from Carlsen Verlag with which this application works.

Under the Leyo! Books is also a fairy tale book entitled "My great fairy tale treasure". It is a large-format picture book in which a fairy tale is depicted in individual sequences on each double page. Below is an abbreviated version of the text. With the app, interactive elements in the book can be brought to life that cannot be seen when viewing the book. 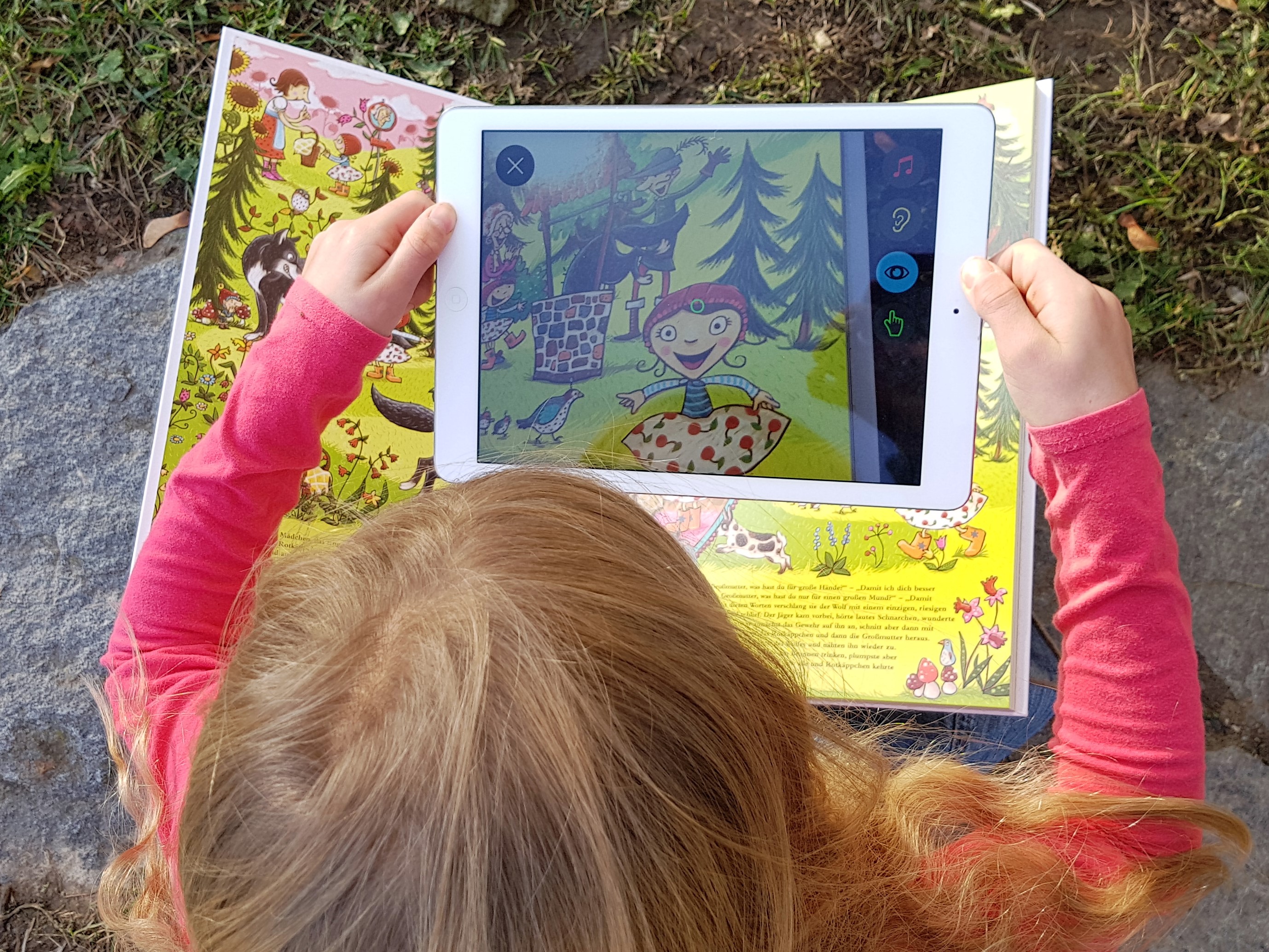 For this, a smartphone or tablet must be held exactly over the book and this is where the weak point of the whole system lies. If the child’s hand does not stay calm enough, the app jumps from element to element and the speaker tells a lot of confusion. Book lovers also criticize children not with the book, but are too busy with the screen of the mobile device.

Regardless of whether it’s a book or app group, the implementation of Leyo! has defects and was therefore unable to assert itself. In any case, this was not due to the Grimm brothers’ fairy tales.

Anyone who enters the keyword "fairy tale" in the App Store will find a variety of suggestions from which to choose. Fairy tales are also popular in digital versions. Many fairy tale apps are a mix of a picture book and a game. It is striking that many fairy tale apps have a direct reference back to the medium of books by depicting a fairy tale book that is flipped through. As a rule, the child can choose whether to have the fairy tale read out or read the text itself. According to the app, both the quality of the text and the narrator’s voice are of very different quality. 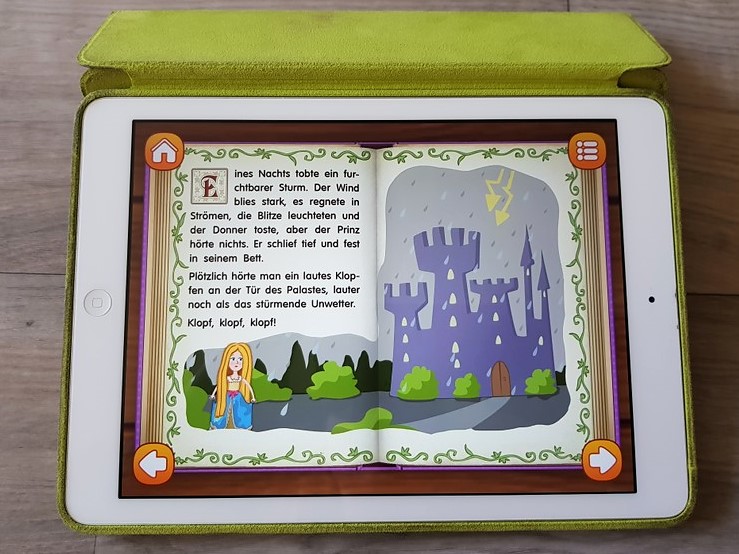 Of course, fairy tale apps go beyond just telling fairy tales, otherwise they would be e-books. Mostly animations and effects are triggered by touching certain points. Some apps offers additional games, puzzles and puzzles with the pictures and characters of the fairy tale. 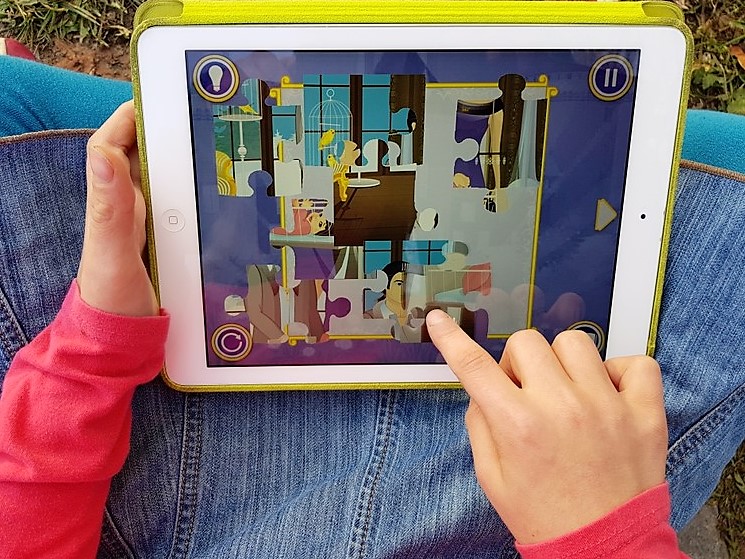 With my preference for beautifully illustrated picture books, I don’t like the majority of the illustrations in the fairy tale apps at all. My daughter, however, sees things differently. For her, the interactive elements and games as well as the content of the story are more important and she looks impartially what she can do with the app.

Everything was better before?

Fairy tales used to be told orally and passed on. With the printing of books and the book as a mass medium, this changed; reading aloud together, getting together was inextricably linked with fairy tales. When children handle a fairy tale app, a completely different situation arises in which the child is alone with the app and its operation. The highest of the feelings are short exclamations like: "Mom, look what the wolf is doing here!". Everything used to be better, wasn’t it? But that’s not true. From different establish.

Fairy tales are not for children?!

Are the fairy tales from books suitable for children at all? This is a question that has been and is being discussed controversially. The main question is whether children understand the symbolism behind the atrocities and are overwhelmed by them or not. That certainly depends on the child, we read fairy tales much later than other families, because I found them creepy as a child and was afraid afterwards.

The position that scientists like to take, that fairy tales are just a projection screen for children’s fears and these can be resolved in the shared narrative situation, I doubt with my subjective experience.

I find the traditional role models, attributions and pedagogical views in fairy tales very disturbing. The bad wolf, the nasty stepmother, the noble prince, the brave hero and the lovely princess … Here clichés are passed on, which I do not want to convey to children without thinking. In my view, the magic word is “reflection”. From a certain age, children are certainly able to consciously perceive the symbolism and to classify the fairy tales in the context of their time of origin. 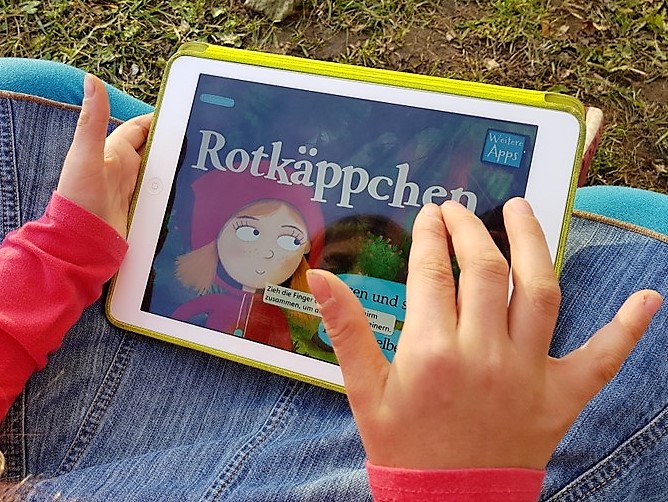 Fairy tale apps offer great potential, especially for younger children, since they do not strictly adhere to the narrative (fairy tale apps have children aged 3-6 years as the target group). A very good example of this is the "Little Red Riding Hood" app from Carlsen Verlag. Little Red Riding Hood is not at the mercy of the situation, but the child can use various applications to disturb the wolf’s actions and thus free everyone in the end. Incidentally, the animal is not killed either. This variant offers children a much better opportunity to experience themselves as effective and competent against fears and threats than the story situation with the storybook can.

While my generation can still talk about books from their childhood because there was a significant amount of shared children’s books, things are different today. So many children’s books are now appearing on the market that there are only a few who read many children. Common childhood memories are lost. Fairy tale apps, in addition to other media, help to pass on the basic features of the Grimm brothers’ fairy tales as a common cultural asset.

You are reading a children’s book blog here at Kinderbuch-Detektiven.de, which means I value the value of books, reading aloud and reading very highly. However, I do not find it desirable to oppose progress and change processes. Once it was printed books that were demonized, today it is multimedia applications that children deal with. Whoever keeps them away from children and thinks to protect them with them, “verappis probably "self".

This article is my contribution to the blog award “Children and (digital) media: everything was better in the past ?!”. You can find out more here. #medienmomente

If you like, please feel free to leave me a comment, I’m very happy about that. Do you read fairy tales to your children? If so, from what age? What do you think of fairy tale apps?