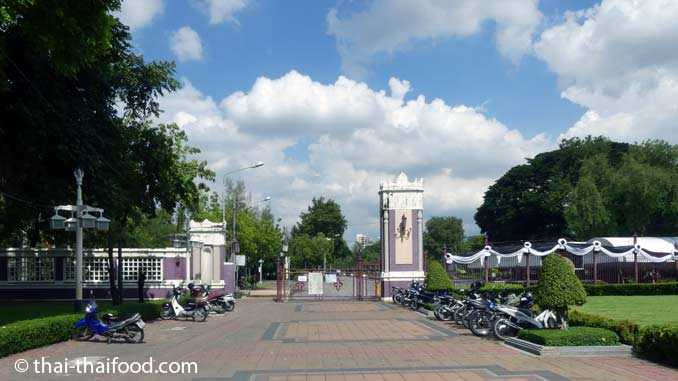 ► The Lumpini Park is the largest park in the heart of Bangkok in the district Pathum Wan with about 57 ha/ 360 Rai | ปทุมวัน . The park was built by King Rama VI. It was built at the beginning of the 1900s on royal property outside the city. Meanwhile Bangkok has grown rapidly and the park is now located in the centre of Bangkok. The beautiful tropical park serves the Thais as a meeting point, a sports venue and a retreat for relaxation. Everywhere in the very well-kept green park one can marvel at exotic plants and trees. 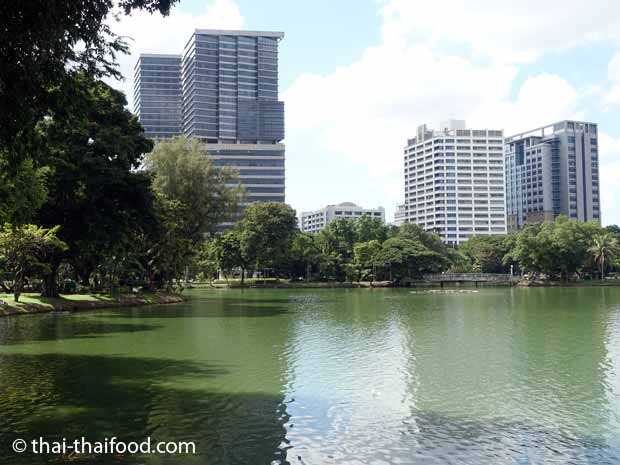 The park is separated from the big city of Bangkok by a wall and is a place of peace and relaxation. 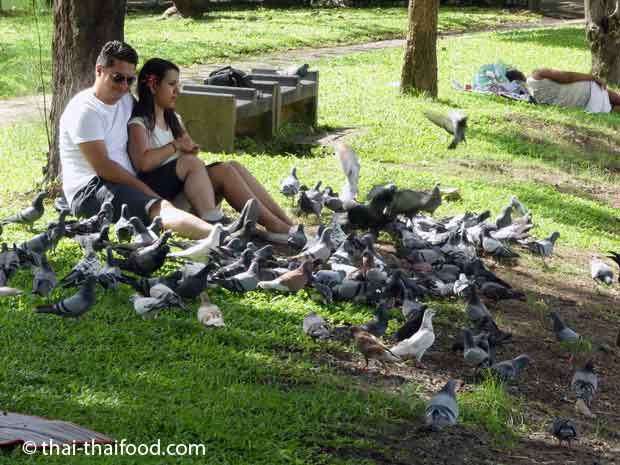 In the middle of the park there is a lake landscape lined with palm trees and some water channels where you can relax wonderfully. Around the park you can see the skyline of Bangkok.

Is it dangerous in Lumpini Park?

During the day the park is very well visited and it is certainly not dangerous to be there. But at night you should be careful, and as with us, you should NOT walk alone in the park after dark. 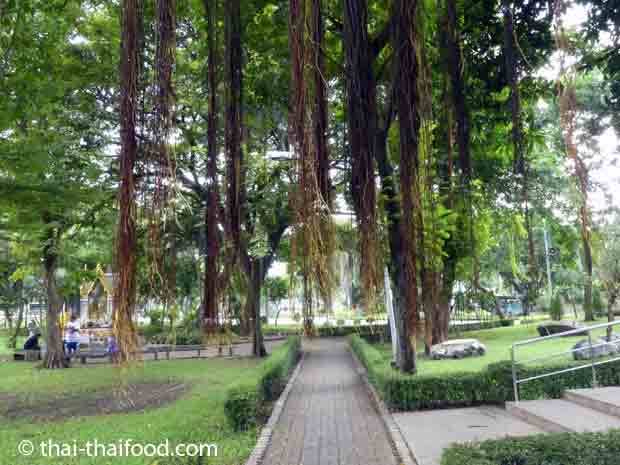 Lianas at the temple in the park”

By the way, there are video cameras all over the park that monitor the park. Also policemen on horses are on the way in the park, who look after the right. I think if there are two or more of you, you don’t have to worry.

There are many colorful tropical plants that you have never seen before. Furthermore, there are numerous trees and palm trees that can not only provide shade during the walk through the park, but are also a nice photo motif.

On the shore of the lake and along the canals live many monitor lizards up to 2 meters large, which can be observed beautifully. There is no need to be afraid of the monitors. But you should keep them away from you, because they can snap when they defend themselves.

There are many monitors

In the lake there are many fish, which can also be fed. The food for the fish is sold in the park by the Thais. Pigeons, ravens and other birds always want to get some of the fish food. The peacocks running freely in the park should not be crowded just because you want to make a selfie with them.

In the Lumpini Park there is a fitness area with many free fitness machines. There is also a 2.5 km long fitness trail in the park. On the existing trim-you-path and in the fitness area you can see many Thai sports enthusiasts doing their sport exercises there. 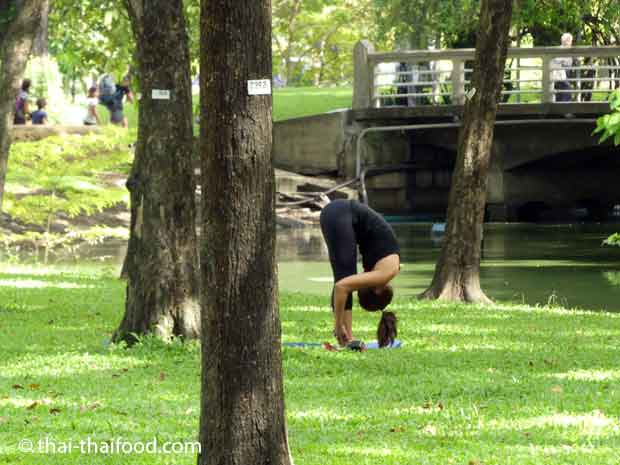 Fitness in the great outdoors

Adults come with their children to play with them on the playground. If you come to Lumpini Park early in the morning, you will see many immigrant Chinese at the morning Thai Chi training. During the day there is public aerobics and gymnastics in certain areas of the Lumpini Park with many people and loud Thai music. This is interesting to watch, but you can also take part. Because everyone is allowed to participate.

Jogging and skating are also very popular in the park. 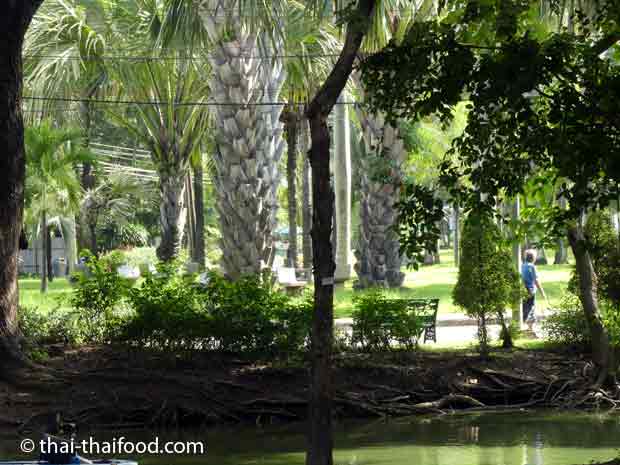 Palms in the palm garden

For children there is an interesting large playground. 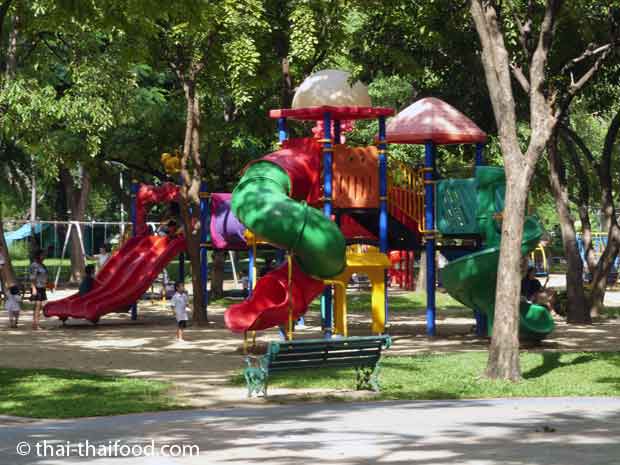 Sunday is concert day in Lumpini Park. The concerts are called “Concert in the Park” and are open to the public. 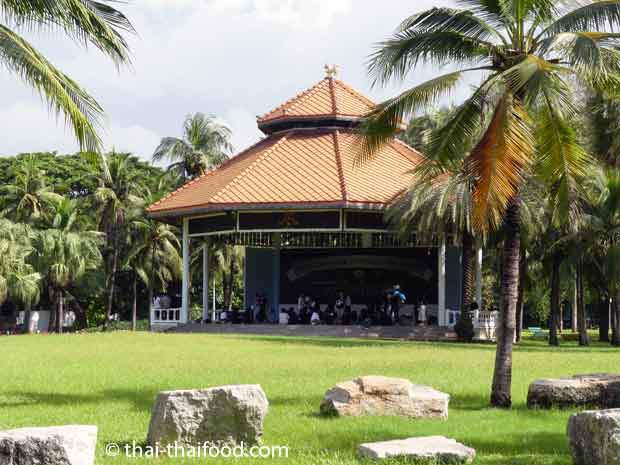 The Bangkok Symphony Orchestra often plays there in the Palmengarten. On the second Sunday in January a traditional children’s festival takes place in the park.

On the lake in the park you can ride around with pedal boats, which you can rent for a reasonable price. However, one should not be too big in order to be able to climb into the covered pedal boats at all. 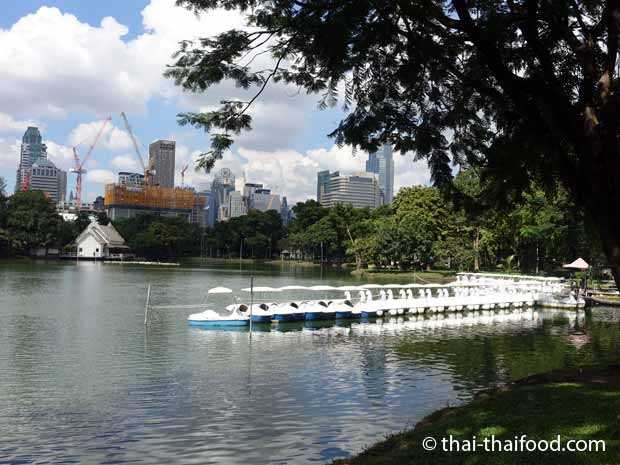 You can use the shady places at the lake on the sunbathing lawn to linger and relax. Straw mats can be rented for a few Baht.

The Lumpini Park is open from 04:30 in the morning until 21:00 in the evening. Admission is free.

The park is located at the Rama IV Road in the district Pathum Wan. The best way to get to Lumpini Park is to use the Skytrain and get off at the BTS Saladaeng station. You can also use the Bangkok subway. Then you get off at the MRT station Silom. Directly opposite you get to the entrance of the Lumpini Park.

In front of the southeastern entrance of the Lumpini Park there is a very special huge beer garden that is certainly as big as a football stadium. If it rains, then a huge automatic roof protects against the downpours and one can continue to party without getting wet. Like at the football stadium on Schalke.

On one side of the beer garden there are certainly more than a hundred beverage stands. There are all common types of beer and draught beers, such as Paulaner Chang, Singha, Warsteiner, Heineken, etc. and all kinds of other drinks and cocktails and freshly squeezed juices. All drinks are available there. Also beer in 1 litre mugs or 25 litre barrels. For groups there is the beer tower with tap. You don’t have to worry about anything, there are innumerable waitresses who supply you with beer and drinks non-stop.

On the other side, opposite the beer garden, there are many different food stalls and cookshops. There is almost everything you want to eat here – including German sausages.

Tip: In the evening there will be live music. Pop, Rock, HipHop, Schlager – everything that creates atmosphere. Pretty dancers dance to the music.