Although Miami Beach is an independent city of around 88,000, it is often perceived as part of neighboring Miami. Miami Beach is best known for its Art Deco district around Ocean Drive, as well as hosting the television series Miami Vice and as a residential and holiday resort for celebrities, as well as a location and photo location for the fashion industry. Tourists appreciate Miami Beach for its beaches and its water temperatures between 22 ° and 30 ° C. Since the 1980s, the city, especially the district of South Beach as the center of the LGBT community. A total of almost 49 km ² urban area also includes some islands in the Biscayne Bay, including a part of Fisher Island, the city with the highest per capita income in the United States.

Miami Beach received city rights in March 1915. A good ten years later, the city suffered its near-complete destruction by a hurricane, and in the decades that followed, heavy storms repeatedly wreaked havoc. Thanks to its appealing location and welcoming climatic conditions, with temperatures in excess of 20 ° C all year round, the site nevertheless developed well and made a name for itself as a sanctuary for older people from the northern states. In the 70s and 80s, however, Miami Beach decayed; Drug dealers settled here and the crime rates reached dizzying heights. It was then not least the running from 1984 television series Miami Vice and the following influx of small companies from the fashion industry, which helped to change the image of the city and lure bourgeois residents. 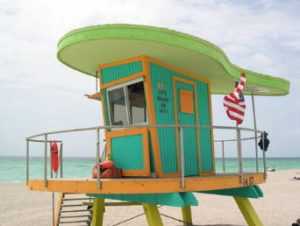 The most famous district of Miami Beach is South Beach, whose boundaries roughly run between 1st and 25th Street. Almost 34,000 people live in the district. Here is the Art Deco district, consisting of about 800 buildings, of which many are now used as a hotel, especially along the Ocean Drive and also known as “Millionaires Row” Collins Avenue. It is the largest collection of architecture of this style worldwide. The colorful buildings are a popular photo opportunity and form the backdrop for the city’s promenade, which is visited by thousands of bar and club visitors, especially in the evenings. The most famous of the buildings is probably the former home of fashion designer Gianni Versace (1116 Ocean Drive), which is also used as a hotel today. Directly opposite this backdrop is the sandy beach of the Atlantic Ocean. In fact, some of the hotels of Miami Beach are already landmarks themselves. These include the Eden Roc (4525 Collins Avenue), which has hosted countless famous actors, politicians and celebrities, and the no less luxurious 1500-room Fontainebleau (4441 Collins Avenue), with its remarkable architecture that has been featured in several Hollywood films, including one James Bond strip, served as a backdrop.

South Beach has many wealthy, especially many European inhabitants. There are also significant gay and lesbian and Jewish communities. The Jewish Museum of Florida (301 Washington Avenue) is housed in part in a former synagogue and is concerned with the Jewish life in Flor >Holocaust Memorial, a monument in the form of an outstretched hand clinging to people, on Meridian Avenue.

A popular address for restaurants, galleries lounges and exclusive shopping is that in the 1960s by architect Morris Lap >Lincoln Road, a pedestrian street between 16th and 17th Streets. The concert hall of the New World Symphony Orchestra, the American Academy for budding orchestral musicians, is also on display here. Performances take place from October to May.

The urban area continues to include the Venetian Islands, a chain of man-made islands between Miami and Miami Beach. Six of the seven islands are inhabited; The seventh, Flagler Monument Island, serves primarily as a picnic spot and as a monument site for Henry Flagler, who had a large part in the development of South Florida at the beginning of the 20th century. The Venetian Islands are accessible from Miami Beach via bridges.

The annual cultural highlight is Art Basel Miami Beach, held in December in the Convention Center, a high-profile art exhibition with many visitors from all over the world accompanied by a variety of events in the city.

Throughout the year the bathing beaches of the city enjoy great popularity with the famous colored houses for the lifeguards. Miami Beach is known for its vibrant and eclectic nightlife. However, access to many of the exclusive clubs and bars is denied to tourists. The club scene focuses on Ocean Drive, Washington Avenue and Collins Avenue.