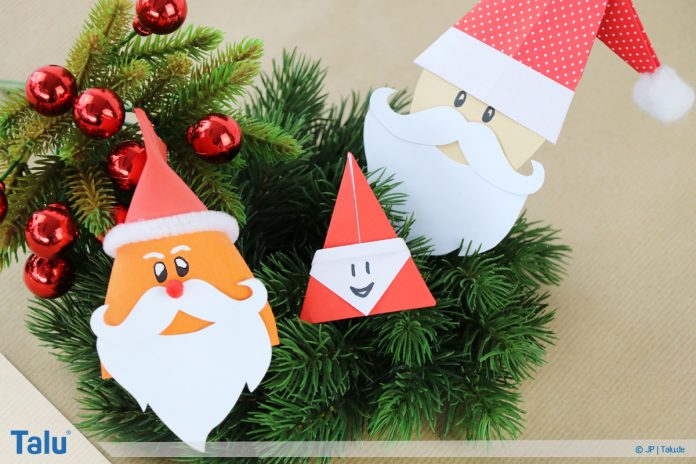 Christmas time is approaching again with great strides and before Santa Claus or the Christ Child comes to each of us on December 24 and distributes many gifts to everyone, Santa Claus comes. In this article, we have put together a few cute little handicraft ideas for you and your little ones to make Santa Claus. In our Here you will find three ideas and handicraft instructions for tinkering with Santa Claus.

With this craft idea you can quickly fold a cute little Santa, which is not only used on St. Nicholas Day. And you only need two small square sheets of paper with the dimensions 9 cm x 9 cm. 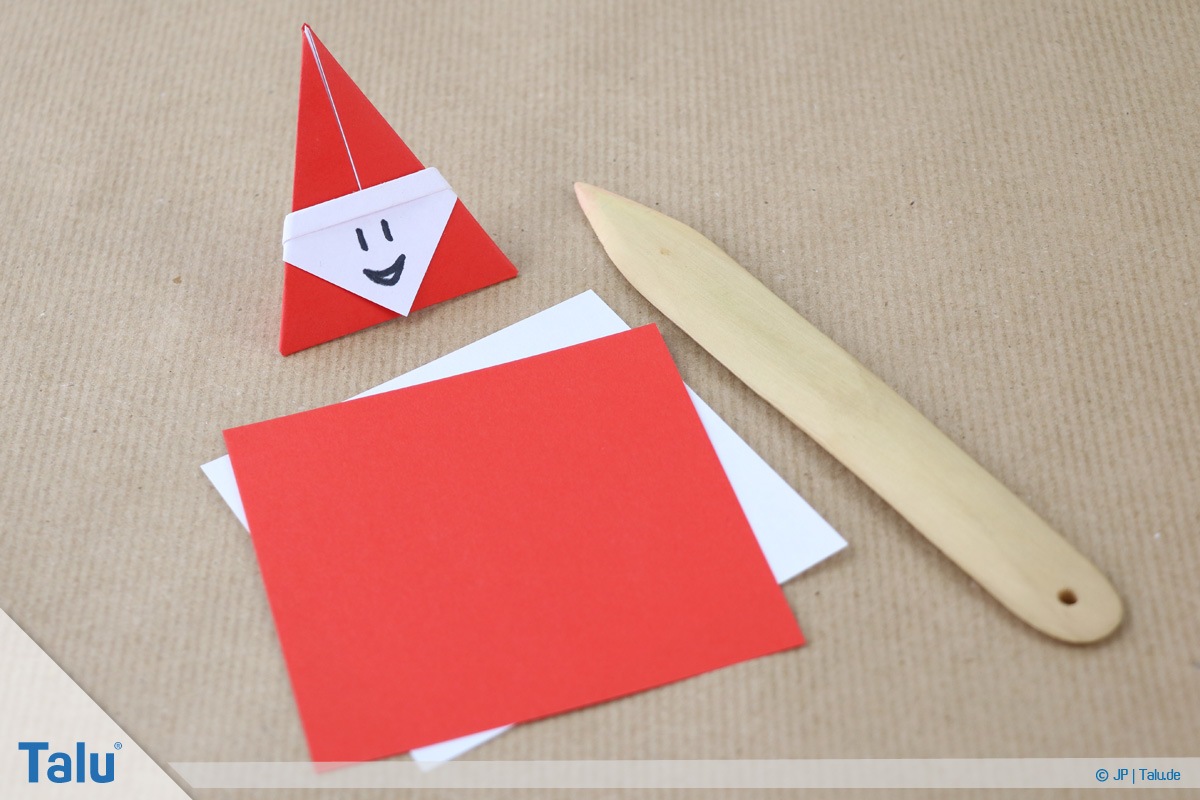 Step 1: First take the two pieces of paper of the same size and square and lay them on top of each other. 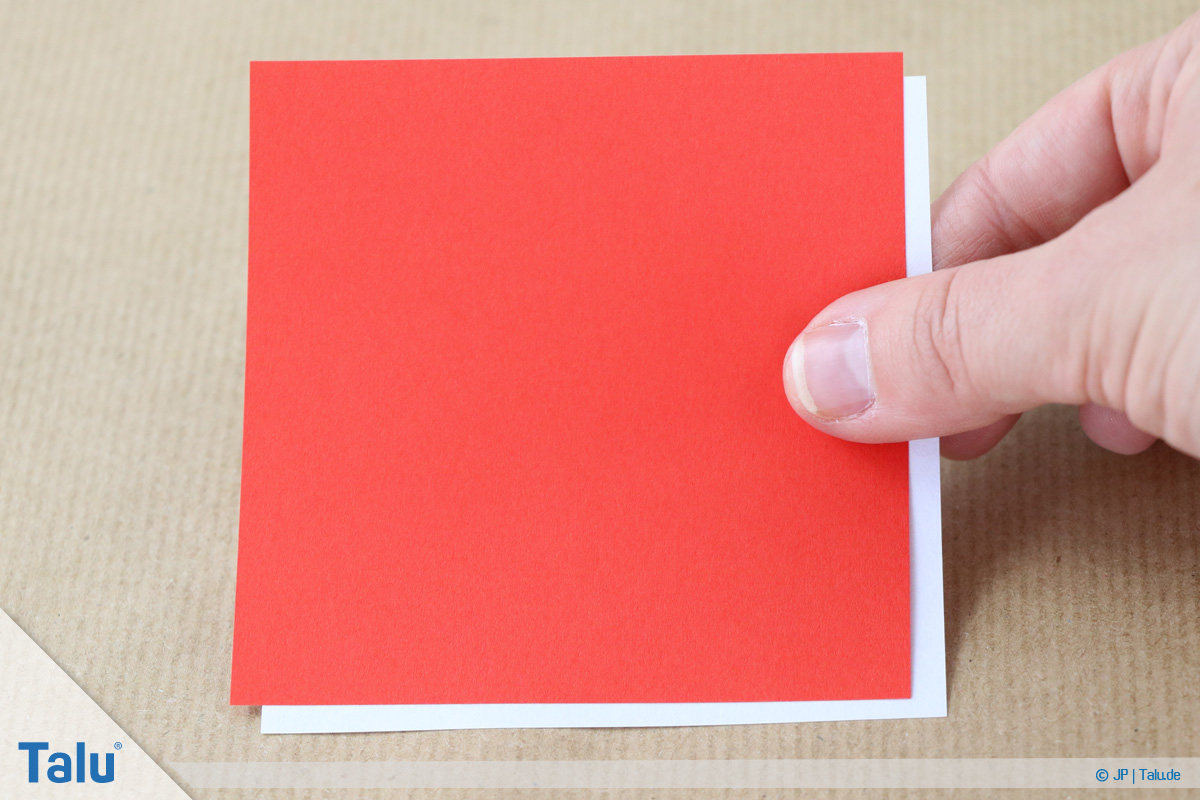 Tip: Use the small and square paper from note boxes or cut the small squares out of A4 paper using a cutting board. Of course you can also use paper with the dimensions 15 cm x 15 cm, so the folded Santa Claus gets bigger.

Step 2: The red square paper is on top and on the top. Now fold the bottom corner onto the top corner. Then open this fold again and turn the square to the next tip, which has no fold lines yet. The square is again on the top and you fold the lower corner again on the upper corner. Your opened square now shows folded lines in a cross shape. 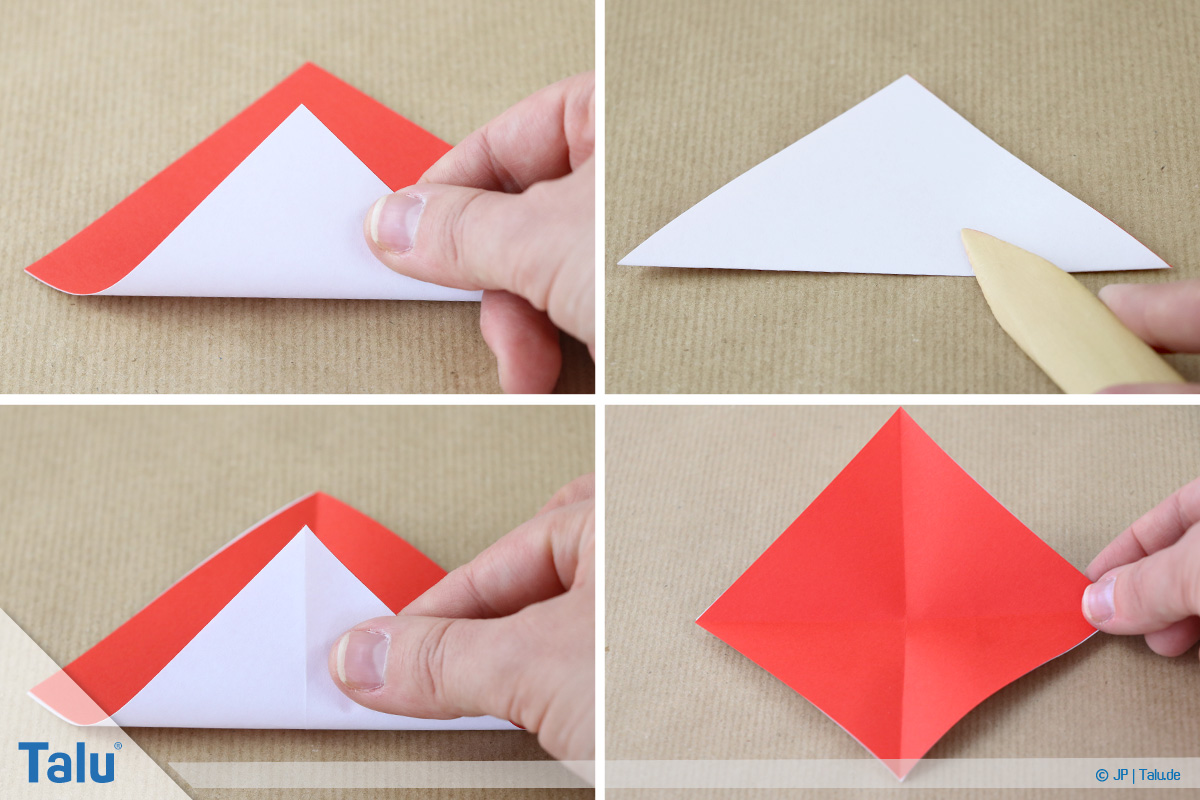 Tip: When folding, use a weatherstrip tool or the edges of a ruler or triangle to trace the folds. Tip: For all folds, make sure that the two pieces of paper placed on top of each other do not slip.

Step 4: Apply your folded shape so that the red side is facing you and the top of the folds from the previous step is facing up. This tip is now folded down on the visible center line. In this step you fold the top to the bottom again. 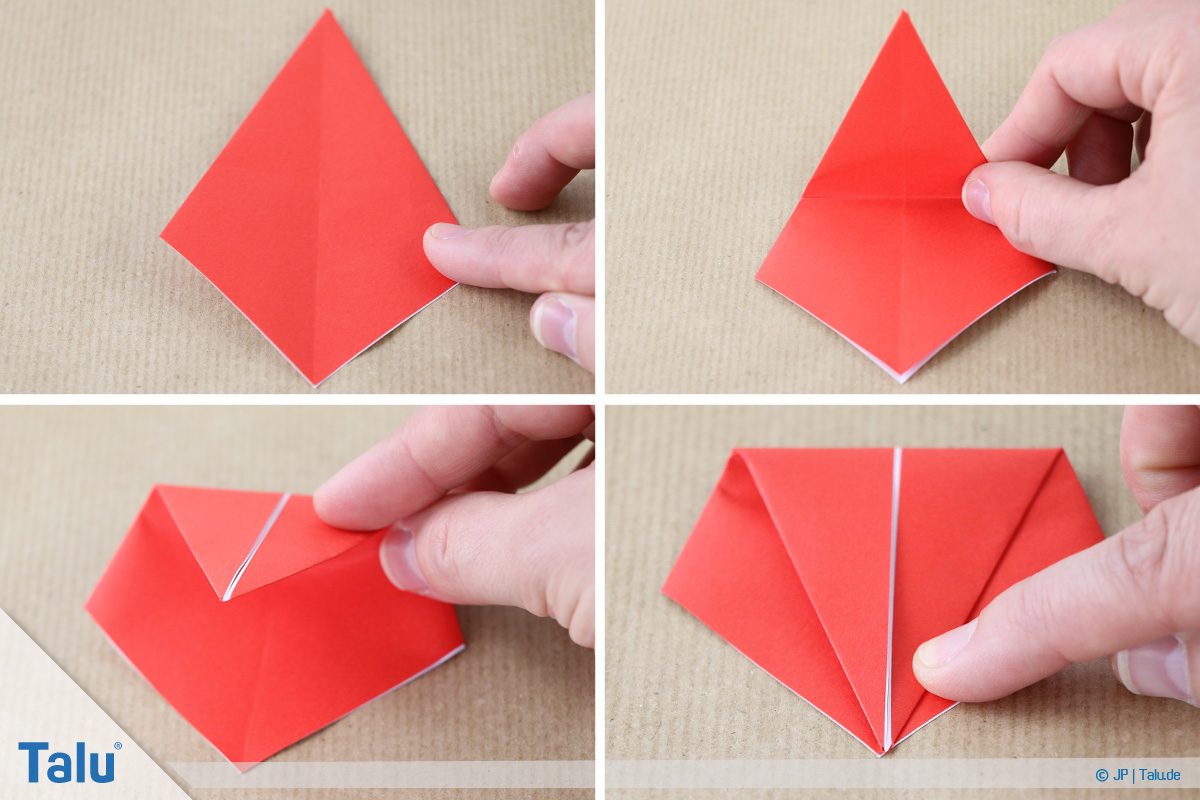 Step 5: Unfold the fold and lay the folding work in front of you as in step four. Now fold the lower tip up to the center line, where the white tip now touches it. Now fold up a small fold a few millimeters thick at the bottom of the straight white line, this fold closes on the right and left with the corners and is thus at the same height. In this step, the red Santa Claus hat has been created. Tip: You can cut off the excess white paper with scissors, unfold your folds and cut the excess to the height of the few millimeter thick fold.

Step 6: Now lay your folding work with the red side up in front of you, the red tip pointing upwards. Now fold the right corner along the red triangle inwards. Then fold the left Corner the same way. The two corners folded backwards now serve as feet for your folded Santa Claus, so Santa Claus can stand upright. 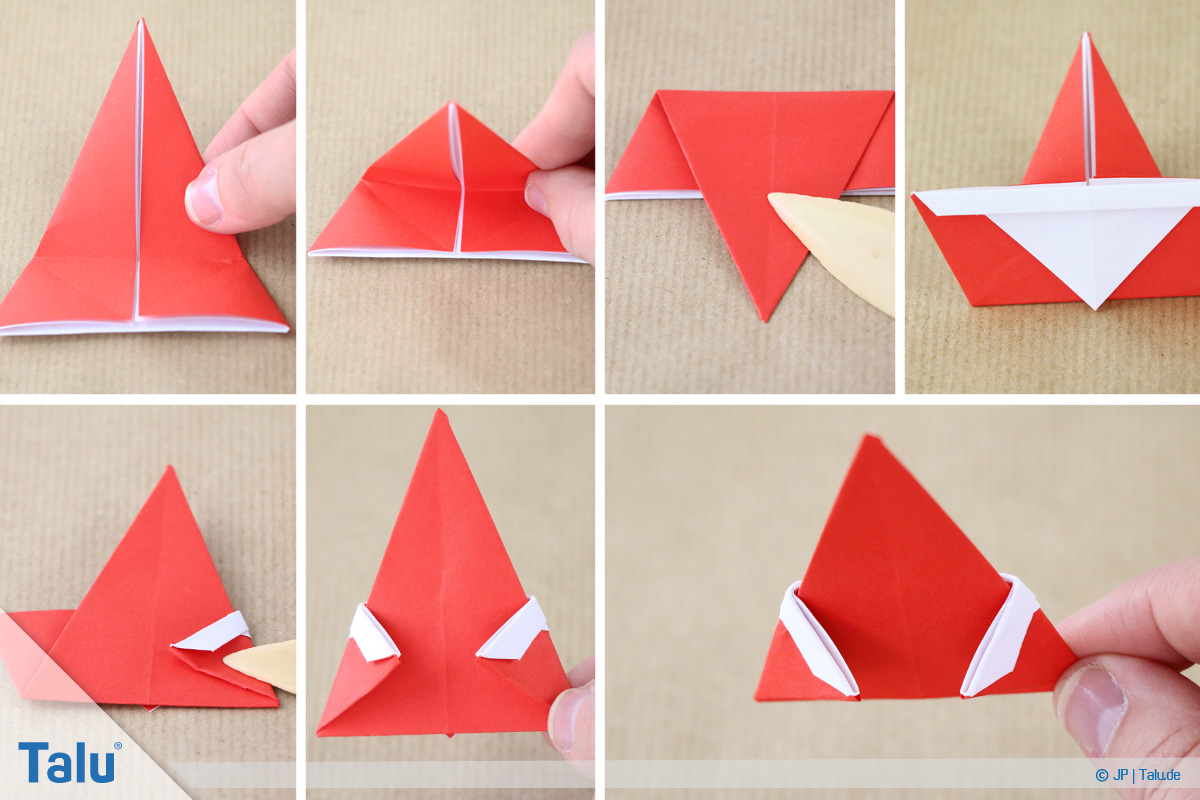 Tip: Be sure to use the weatherstrip tool or an alternative tool to better fold the multi-ply paper.

Step 7: Now turn your folded Santa Claus on the front and put a face on it, which you draw with a black pen. And your Santa Claus is made out of paper.

Santa Claus made of paper

Santa Claus with Santa hat made of paper

With this craft idea you can fold a cute Santa for the upcoming St. Nicholas Day in no time. And you only need a few craft utensils for this.

Step 1: Lay the square sheet of paper with the white sheet side up, in front of you. The square is on one of its long sides. Now fold the bottom edge onto the top edge of the sheet. Then unfold this fold again. 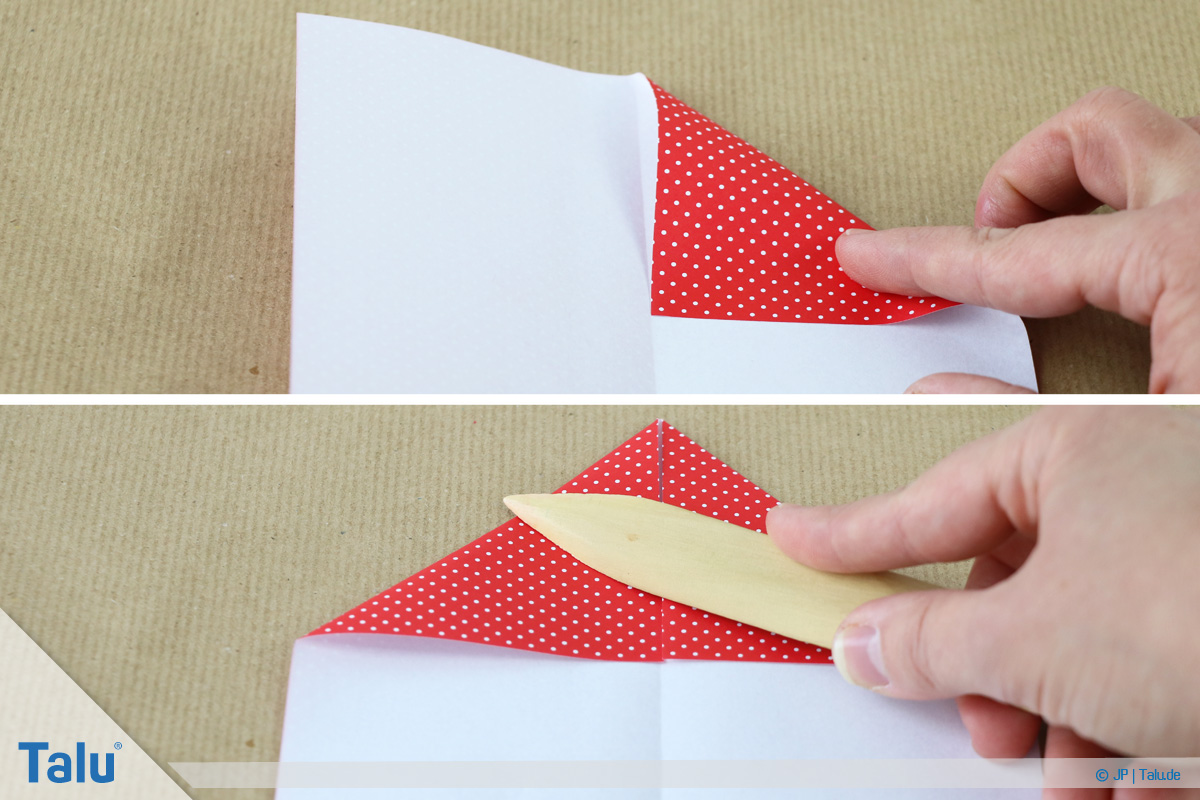 Step 3: Now turn the sheet over to the other side. The top is pointing up. Now fold the lower paper fold straight upwards by 2 cm. Apply your folding work again. Now the folded tip is pointing up again. Fold the left side of the paper inwards. After folding, the 2 cm fold touches the lower edge and protrudes slightly beyond this outer edge. The bevel of the fold runs 3.5 cm from the center line on both sides. Tip: Before folding, measure 3.5 cm from the center line to the left and place a small mark there with the pencil. Step 4: Now fold the right side inwards, exactly on the paper bevel of the previous fold, so that everything closes together. Step 5: Turn your folding work to the other side, the tip of the Santa hat points upwards. Fold the bottom two white triangles up along the white line. Then unfold these two folds and fold them inwards. Step 7: Now cut out a semicircular shape from the beige colored paper. Tip: When sketching the semicircular shape, put on the folded Santa hat as a measure, so the Santa Claus face gets the right size and width.

Step 8: Now sketch the beard for Santa Claus on white construction paper and then cut out the two parts. Cut a small curve in the upper part of the beard so that the beard does not end flush with the face, but in a slightly circular shape. Tip: If you use small nail scissors for small curves and shapes, it will be easier for you to cut out.

Step 9: Now glue the face to the Santa hat with hot glue, as well as the beard. Step 10: Finally, use a black felt-tip pen to paint two black eyes. And with a little cotton wool, form a small cotton ball between your fingers and attach it to the top of the Santa hat with some hot glue. Tip: Alternatively, you can also make a small wool pompom and attach it to the Santa hat as a bobble. Or you can cut a small pompom out of the white construction paper.

And in no time this little Santa Claus is ready to go!

Upcycyling with toilet paper rolls. You can use it to make funny little Santa Clauses. Tip: Instead of hot glue, you can also use a tacker with tacker needles. But Attention on your fingers and those of your little ones, this variant carries the risk of injury.

Step 2: With a little color in red and orange, now paint the cardboard roll in half with the two colors. Tip: While the paint dries on the cardboard roll, you can draw the beard for Santa Claus on white construction paper and then cut it out. Use the nail scissors again to make it easier and easier to cut out the small parts. Again, cut a small curve in the upper part of the beard so that the beard does not end flush with the face, but in a slightly circular shape.

Step 3: After the paint has dried on the cardboard roll, stick a piece of white pipe cleaner in the middle along the color boundary between the two colors. Then glue the beard and the small red nose to the cardboard roll with the hot glue. Step 4: Now paint the two eyes with black felt-tip pen and fill the upper area of ​​the painted eyes with white paint. Then paint on the two eyebrows with a thin brush and a little white paint and the Santa Claus face is ready and brought to life. Tip: You can attach a small thread to the hat as a hanging loop by punching a small hole through the hat or by piercing it with a needle. So this little and funny Santa Claus also finds a nice place on the Christmas tree.

We wish you and your little ones a lot of fun tinkering and giving away various Santa Clauses.