WHAT CHILDREN LEARN
Japanese children are enrolled in primary school in April after their sixth birthday. A typical primary school class has between thirty and forty children. The subjects are Japanese, mathematics, natural science, social sciences, music, art, sports and housekeeping (learning the basic concepts of cooking and sewing). More and more elementary schools have started teaching English. Information technology is increasingly becoming Promoting the Education is used and most schools have access to the Internet.

Students are also taught traditional Japanese arts such as shodo (calligraphy) and haiku. Shodo is the writing of Kanji (Chinese characters) and Kana (phonetic script developed from Kanji) with brush and ink. Haiku is a form of poem developed in Japan four hundred years ago, namely a short poem consisting of 17 syllables arranged in five, seven and again five syllables. Haiku use simple metaphors to convey deep emotions to the reader. 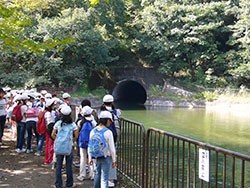 SCHOOL EVERYDAY
In Japanese primary schools, classes for many activities are divided into small groups. For example, the students have to clean the classrooms, halls and courtyards of their school in groups every day. In many primary schools, students eat lunch prepared by school or a local school dining center in their classrooms. Small groups of students take turns serving lunch to their classmates. The school lunch consists of varied and nutritious dishes, so that the students look forward to the lunch break.

There are numerous school events throughout the year such as Sports festivals where students compete with each other in competitions such as tug-of-war and relay races, trips to historic sites, and art and culture festivals with children’s dance and vocal performances. Pupils in the upper grades of elementary, middle and high schools also go on multi-day trips to the old capitals of Kyoto and Nara or to winter sports resorts.

In most elementary and middle schools, students wear school uniforms. Boys usually wear trousers and jackets with a high collar, while girls wear blazers and skirts.

CLUB ACTIVITIES
Almost all secondary school pupils pursue extracurricular activities of their choice, but these are mostly organized by the schools themselves in working groups or by local clubs; for example, they work in sports teams, music or art groups or in a research circle.

Baseball clubs are very popular with boys. Football clubs are also becoming increasingly important, which is partly due to the fact that Japan was the venue for the 2002 World Cup in addition to South Korea. The judo club, where children practice traditional martial arts, attracts both boys and girls. You may have been inspired by the numerous male and female Japanese judo athletes who won medals at World Championships and Olympic Games. Other popular sports that are practiced in clubs are tennis, basketball, gymnastics and volleyball. In every sport there are many competitions between the individual schools and also at the regional level, so that the pupils have many opportunities to compare them.

With the culturally oriented clubs, the Go circles in particular have recently gained popularity. Go is a strategic board game that is played with black and white pieces. After a manga (comic) about the game was released, more and more students started playing Go. Other options for students are choirs or art groups. Marching bands, circles for tea ceremony and flower sticks are also popular.