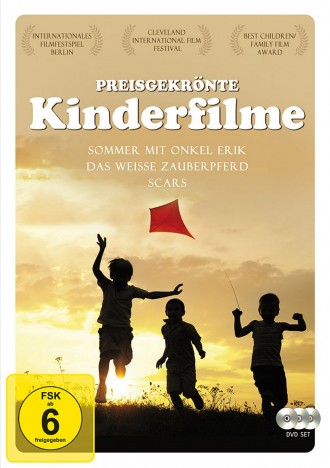 Erik Lund is a professor of child psychology and known for his child-friendly theories. When his sister goes on vacation, he has the opportunity to try out his teaching in practice on her five children. But Erik Lund did the math without his nephews and nieces. For them, the unreal uncle is a welcome change and they dance around on his nose to their hearts’ content. Than the old but lovely House to be sold to the family, they pull themselves together.

Papa Reilly and his family once traveled across Ireland as a proud nomad with horse and carriage. After the death of his wife, he gave up the free life of the traveling people and vegetated with his two sons Tito and Ossi in a dilapidated social home on the outskirts of Dublin. The few He usually spends money that he receives on care at the beginning of the month for alcohol, and occasionally earns a few pounds with odd jobs.

The bleak lives of the two boys change suddenly when their grandfather comes to Dublin in transit. Because this time the old man not only has the legends and fairy tales of the traveling people in his luggage: a white stallion that has accompanied him for a few days has followed him into the city. The eight-year-old Ossie immediately becomes friends with the mysterious animal, a close and almost magical relationship develops between the two. From now on, the horse follows the two children at every turn, the boys decide to take the animal home with them. Anger is inevitable, because a pet of this size is difficult to keep secret in a thin-walled apartment block. And so it comes as no surprise that the police show up at Papa Reilly a short time later to Tir na n’Og – the name the children gave the horse means something like "Land of Eternal Youth" – pick.

The children are heartbroken and want to "their" Have the horse back and start looking, but the animal has now been sold by a police officer for a lot of money and without permission to a racing team owner. When Tito and Ossie see Tir na n’Og on television during a racing event, they regain hope. Now all they have to do is get the mold out of the barn! However, it is difficult for them to return home because what they are planning is actually theft. The brothers decide from now on "like cowboys" To live and ride westward, Tito can remember street life when his father was still the one "King of the Moving People" was, remember well.

The children manage to kidnap Tir na n’Og, but as simply and romantically as they do life as a traveling man presented have, the reality is not. The police and racing team owner Noel Hartnett are also on their heels.

The disappearance of his two sons also tears Papa Reilly out of his lethargy, and he begins to look for them with concern. When he asks his friends for help from the Traveling People, the search for the two children becomes more and more a dramatic and hopeful journey into his own past .

A modern fairy tale full of adventures and secrets!